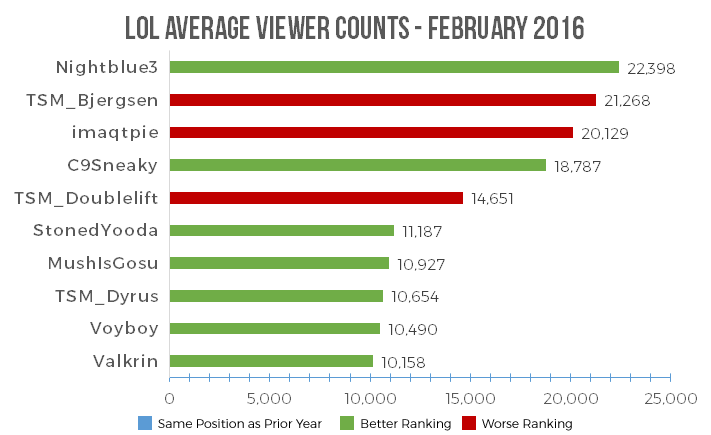 In February, Twitch viewers watched 92.5 million hours of League of Legends, up 10.4% over the same month in 2015. The real increase for the same days lies closer to 7% though, due to 2016 being a leap year. While not growing as quickly as other titles, this appears to be reasonable growth for the game.

One likely cause for slower growth is the decline in viewership of Riot-run events on Twitch. Despite broadcasting 44 more hours on the main Riot Games channel, total time watched dropped 11.1% from 20.9 million viewer hours in February 2015 to 18.6 million in February 2016. Across all Riot-owned channels, viewership dropped 16.8% to 21.5 million viewer hours while broadcasting nearly the same total time. This could reflect a switch in preference to YouTube Gaming or Azubu, declining interest in the competitive scene, or both. Azubu numbers for February weren’t collected, and YouTube Gaming does not have a publicly available way to measure its viewership, so it’s difficult to identify the cause at the present time. Either way, it’s certainly a worrying trend for both Riot and Twitch.

Another trend that might prove disconcerting is the number of channels streaming the game. The total number of streamers for LoL barely rose to 153,593, only up by 0.2% over the prior year. And amongst the top 500 channels in February 2015, only 320 (64%) streamed the game at all a year later.

This turnover in the broadcasting pool has created opportunities for some broadcasters to grow their viewer base and climb into the top 10. On average, half of each chart has changed, and virtually no one has remained in the same spot as last year. Without further ado, let’s look at the changes.

Since dropping all the way down to 10th in April of last year, Nightblue hasn’t stopped climbing. He claims the top spot, up from 4th in February of last year. In doing so, he knocked stalwarts Bjergsen and Imaqtpie down a spot each.

While several streamers on this list made impressive climbs, Valkrin is the largest riser by far, going from a spot in the mid-400s to 10th place, growing from an average of 272 viewers to 10,158 in the span of a year.

Most Viewers at Peak

Like with average popularity, Nightblue takes first place. Qtpie holds steady at #2, while Bjergsen, number one last year, gets bumped all the way down to #5.

Taking the title of “Most Dedicated” for February is Gothahma, a Singed-only streamer from South Korea who averaged 16 hours of broadcast time per day. This beat #2 h123654782 by nearly an hour per day.

This category has the most turnover of any list, as only one of the top 10 was even streaming last year. Ninth place ICameExeCuTioner put in 40.6 hours in February 2015. Meanwhile, none of the top 10 from that month made the cut this time.

The only chart without turnover at the top, both Qtpie and Nightblue remained in the same spot as a year ago.

While Twitch and Riot probably need to sit down and discuss what’s going on with the viewership for competitive play, individual broadcasters are seeing stronger numbers than ever. As a group, their viewership increased from 57.9 million viewer hours to 70.9 million, showing significantly increased interest in their content, if not Riot’s. We’re a long way from warranting chants of “DAED GAME” in Twitch chat, but I wouldn’t be shocked to see some changes in the broadcasts if viewership trends continue this way.