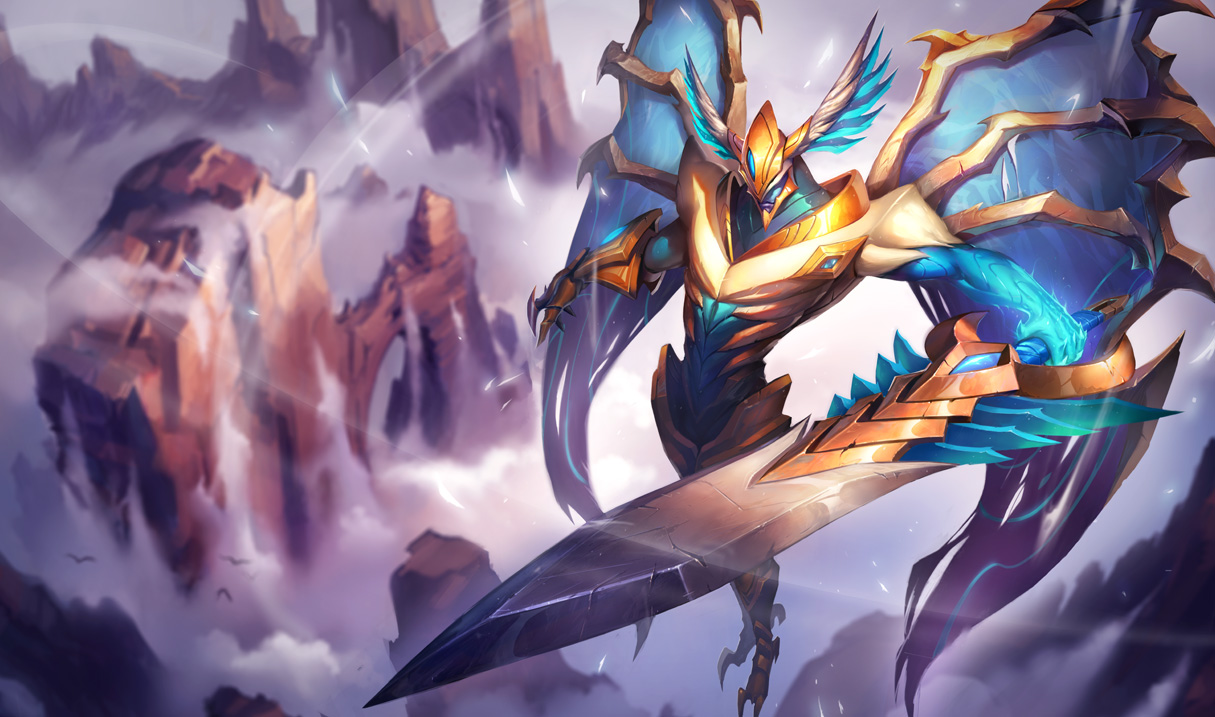 Hey guys! CD-Mangaka here for another League patch breakdown. This is basically going to cover the largest implications for competitive play and solo queue. I won’t go over everything here since Riot does a good job of explaining their viewpoint, but I’m going to touch on things they haven’t or provide my own insight. Let’s get started! Read the notes below:

And check out my Youtube video where I go over all of the patch notes – not just the big stuff I write about here.

I’ll contextualize this section by saying Aatrox is one of my favorite champions. I am really drawn to his design and his gameplay feels natural to me (he is auto attack reliant like ADC’s, my main role). In all honesty, I don’t think his buff is going to suddenly burst him into the meta and make him a contested competitive pick (OK, maybe in Europe), but one cannot understate how substantial this buff is. When he uses his ultimate, he gains 20% of his bloodwell for every person hit. This is an immense buff to his mid and late game in team fights since Aatrox can’t keep his bloodwell fully stacked without always being in lane. Now that he can initiate fights with nothing in his bloodwell and potentially stack it full instantly, this helps him in terms of damage and in tankiness: as his bloodwell fills up, he gains attack speed, which means more autos and more procs of his W, either a buff to his sustain or his damage. Furthermore, when you trigger his passive by killing him, he regenerates health based on what his bloodwell contains: late game revivals on Aatrox can be underwhelming since you usually die within the first moments of teamfights and don’t have your well stacked, but this alleviates that issue and gives him more impactful revives. He will definitely perform better in solo queue in longer games, and maybe show up in this heavy team fight meta in competitive, more likely as a jungler than a top though.

Both of these junglers have had rough times since the jungle changes, having fallen from their prior glory after nerfs to their kits and the increased jungle difficulty. Riot is giving them some love to their utility – in Eve’s case, she now stealths quicker in the late game, meaning that her counter vision game is improved dramatically as she can invade for vision with less risk of being seen. Her W was nerfed though, now going on a reduced CD per spell hit rather than a stacking ms buff. This means her chasing will be less overwhelming, but her safety with the cleanse mechanic on it will be improved since she can activate her W more often. Bit of a give and take really – whether will see her in competitive play given the current jungler pool is unlikely, but it leaves her potential to rise up given drastic changes.

Elise also sees a change in her utility, gaining 10 MS in her spider form (while losing 5 in her human form), a faster cocoon, and a usability buff to Rapel. These will help make Elise easier to play, and the movespeed will help her move around the jungle faster, but I feel until she gets buff to her damage and objective control, we can count on summoner’s rift being spider free.

Athene’s and Morellonomicon have been duking it out over who is the staple mid lane item for mana regen and CDR. The consensus is that Athene’s is the defensive option while morellonomicon is the offensive choice or the pick when up against an AD laner. Morellonomicon has been the item of choice these past several patches since it has been cheaper than Athene’s, gives more offensive capabilities with its higher AP, and has outclassed Athene’s in terms of mana regen since the per 5 stat rework on items for season 5. Now, Athene’s own regen has been buffed to match Morellonomicon, along with its unique passive being doubled to 30% restored mana per kill or assist. With these changes, Athene’s, with its other unique passive Mana Font, will now outclass Morellonomicon in terms of mana regeneration and opens the door for defensive mages who spam wave clear to come into the meta. I don’t think Athene’s will over take Morellonomicon as the go to item, but rather the situations where players would pick up Morellonomicon over Athene’s despite being the unfavorable choice will decrease.

Sej Nerfs and Twitch Buffs – Tanks and your ADCs

(click the image to see the video which uses this image)

Big surprise: Sejuani is getting nerfed. I agree with both of the changes for two different reasons: I agree with the nerf to her W’s % health damage since the point of picking a tank over a bruiser in the jungle should be an emphasis on lockdown over damage. Nerfing Sejuani’s damage, which nerfs her clear as well, is good since it gives the player more deliberation between choosing her and choosing someone like Rek’Sai.

That said, it sounds like I could be having a double standard since I also agree with a nerf to Sejuani’s lockdown with the nerf to her ultimate’s slow – that’s a nerf to her identity as a tank, isn’t it? I’m OK with this since it places an emphasis on actually landing the bola to get the immense lockdown. Like Riot said, you could miss the ultimate and still get the desired effect with the slow, and considering how safe of an engage it is, that’s too strong. By nerfing the slow, it makes it more crippling for Sejuani to miss those ultimates, therefore making it more rewarding to land the ultimate. Now, if Riot had nerfed the stun duration on her ultimate, I wouldn’t agree with that change as it would be catastrophic to her effectiveness and punish her for landing the ultimate. This change doesn’t do that.

Now for Twitch: basically, his early game has been buffed substantially given the fact his passive does double damage levels 1-3, and there are few levels where his damage is equal to what it will before. His late game damage is still the same, but these changes will help him trade in lane and therefore be safer.

Why did I include these changes to Sej and Twitch in the same section? Because their could be a relation between auto attack focused ADCs and tank junglers in the future. With tank junglers becoming viable, compositions with two tanks are more common, meaning there is more health to burn through. With this increase in a team’s tankiness, it will require more damage from a team, and that’s where hyper-scaling marksmen come in. Caster ADCs like Lucian and Corki fall off in the late game, and if they can’t kill these tanky frontlines, then there will have to be a shift to compensate. Champions like Kog’Maw and Jinx are played often and both fit into the role of hyper-scaling marksmen who could eat through tanks, and perhaps champions like Vayne or Tristana could appear as well.

Now, with League in as a diverse state as it is (Urgot mid anyone?), I don’t think we’ll see shifts from pool A to pool B unless Riot goes way off on some of their changes. Rather, I think we’ll see a widening in terms of what we could see coming out from team compositions and picks: this is the most diverse season of competitive play since League’s early days, and more champions are being picked up not after huge swings in nerfs or being outrageously buffed (Vladimir), nor are champions disappearing as they are nerfed. It feels like choices of champions are effected by what players practice and what compositions they design. Furthermore, Riot’s balancing has been pretty good since their shift in approach with 5.5. They are observing the context of the game environment and balancing based around that, an approach evident in their reluctance to touch Nidalee until we see how she fares in this rising jungle tank meta.

Here’s to League of Legends Meta golden age. May it flourish.