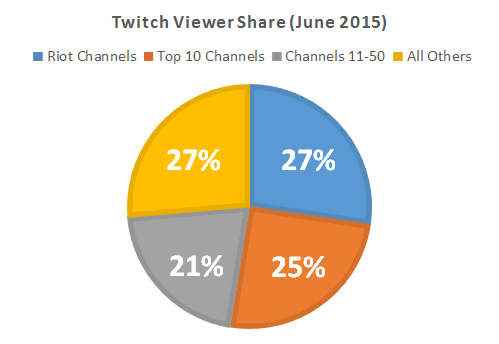 League of Legends stream viewership dropped to 86.4 million viewer hours in June, down 1.0% compared to May. This goes against what I would have expected, which is an increase coinciding with the end of the school year in North America. It’s possible that American students watch more League streams when they’re procrastinating homework.

My other theory, which I originally mentioned in February’s numbers, is that Riot’s own first-party content crowds out third-party broadcasters and reduces the time spent watching LoL or slows its growth.

In June, Riot Games’ own content accounted for 27% of all LoL watched on Twitch, up from May’s 23%. At the same time, viewership dropped 0.95% month-over-month to 83.7 million hours. But the change was even more pronounced in Azubu’s numbers.

A shocking 59% of all League watched on Azubu was from Riot’s own channels, up from 53%. Overall viewership dropped 3.84% to 2.63 million hours. If this effect exists, it’s may be more noticeable because of the company’s larger reliance on first-party content, although it could potentially be a result of the larger margin of error on a smaller sample size.

After launching a new site design and opening registration for its platform, Azubu went from 136 unique broadcasters in May to 476 in June, a 250% increase. However, that did not appear to significantly effect League viewership for the month as visitors only spent 3% of their time outside of Riot content or the top fifty streamers. And while Azubu saw a substantial percentage increase, its overall streamer count still pales in comparison to the 134,076 who broadcasted on Twitch.

Bjergsen remains number one for the seventh consecutive month as he continues to lap the field in concurrent viewers. Nightblue3 rose to the number two spot, his highest rank since December.

Among those he passed were Imaqtpie who fell from second to fourth and Sneaky who dropped from third to ninth.

Bjergsen stays on top here as well, the sixth time in the last seven months. But like on the average viewer charts, Nightblue is climbing here. He’s progressed from tenth in April to seventh in May before reaching to second in June. He began gaining momentum with his Bronze to Diamond Ranked Team streams, but he’s continued growing even after finishing that series.

Pobelter also made a dramatic ascent to fifth, charting for the first time since January. And for the first time, not one but two supports made a chart as Aphromoo and Lustboy both reached over 25,000 viewers at once.

I don’t what else to say except that weitoodamage went Super Saiyan. I’d find his total too high by far if it weren’t for the fact that he streamed 400 hours last month, so they have some history there. I mean, what’s another four hours per day if you’re already streaming for thirteen? It’s likely they also spent a lot of time live but AFK, but we’ll never know because I’m not going to watch 516 hours of VODs.

The only other broadcaster to remain on this chart from last month is ipav999, who fell from the top spot to fourth.

Qtpie retains the top spot for the seventh consecutive month, but Nightblue’s momentum brought him much close to number one. While there were still 400,000 viewer hours separating the two of them, it’s the first time anyone has come within 15% of Qtpie’s totals.

Several other broadcasters climbed this month as LCS players like Sneaky, Dyrus, and Aphromoo fall off as LCS returned to its full time schedule.

Last but not least on the chart, asiagodtonegg3be0 makes the list for the first time. From what I can gather, he’s quite popular among the Taiwanese community for his saltiness. He normally hangs around the top twenty, but never made it until now. I can only imagine he’ll look like this when he finds out.

If you’d like to find out where someone landed on these charts, you can view full rankings by downloading the full files from Google Docs: