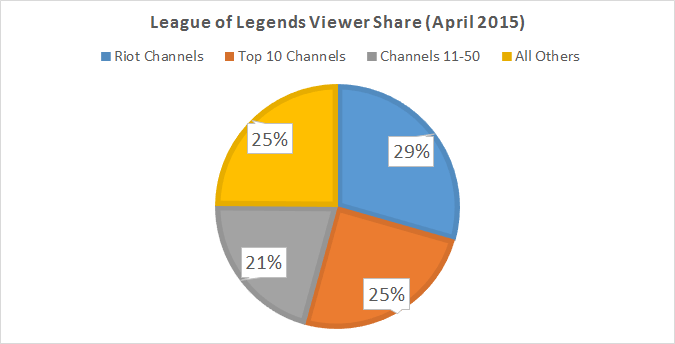 League of Legends viewership on Twitch was down in April, dropping to 81.8 million hours of gameplay watched. This represents a 10.9% decrease from the 91.8 million viewer hours in March.

The LCS playoffs were held throughout April, and while this drove more interest in individual series, it decreased overall LCS stream time and condensed the schedule into weekends only, as opposed to the normal Thursday through Sunday broadcasts. Despite the tremendous hype around the spring split championships (Fnatic vs Unicorns of Love peaked at almost 450,000 concurrent viewers), eight fewer days of competition lowered the grand total.

At a macro level, viewership trends did not change significantly. Riot’s own content took the largest share of viewership.

First-party streams accounted for 29% of all League of Legends watched on Twitch in April. This is an increase over March’s 24%, although the prior month’s numbers were deflated by IEM Katowice (hosted by ESL). This still represents a decrease compared to February’s high of 31% however.

The following charts display stats for individual streamers. Red bars indicate a rank on the chart worse than the previous month, while green bars represent an improvement. Blue bars mean the broadcaster received the same rank. Team channels, shared channels, and event streams have been excluded. All numbers are based on Greenwich Mean Time.

Bjergsen retained the number one spot for the fifth month in a row. Surprisingly, WildTurtle surged from fourth to second, overtaking Imaqtpie for the first time. Qtpie’s viewership was down slightly without his streams leading into IEM Katowice, but to be fair, Turtle only needed to maintain that average for 15 hours while Qtpie kept his numbers for nearly 245 hours.

Nightblue dropped significantly, falling from sixth to tenth and losing 4,000 viewers on average. The only newcomer to the list was Rekkles, who will probably stay on this list if he continues streaming for his new old team.

Bjergsen retakes his title from Imaqtpie, leading this chart for the fourth time in five months. And like with the average viewer chart, WildTurtle surpasses Qtpie for the first time. Dyrus also made a surprising climb to fourth, meaning that like in the LCS, Cloud9 finished behind TSM. However, both Sneaky and Meteos posted their largest peaks and finished in their highest spots since December.

In addition to Rekkles’ debut, Blem makes his first appearance on the chart, giving hope to all the downtrodden Lee Sin mains in this new Cinderhulk world.

j22548220 takes the top spot after broadcasting 422 hours of League in April, improving on his second place and 398 hours streamed in March.

Trick2g also makes a return to this list for the first time since December, racking up 330 hours of broadcast time for the month.

Qtpie continues to keep the number one spot on lockdown. No one can match his combination of audience size and time spent streaming. And while Trick doesn’t have the same number of viewers, his sheer volume of stream time puts him into the number two spot easily.

The largest increase by far belongs to Blem, who went from 45,000 viewer hours in March to 938,000 in April, over twenty times his previous total.

If you’d like to find out where anyone on these charts, you can view full rankings by checking out these Google Docs: