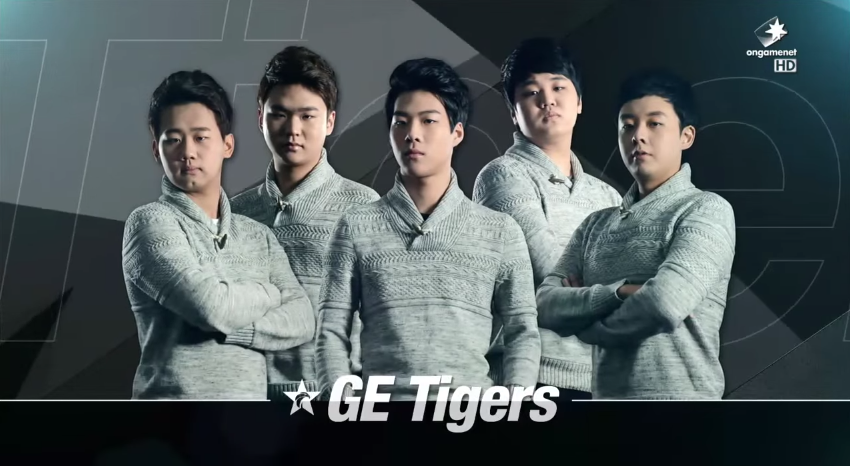 Currently leading the Round Robin table 3-0 with only a single game lost, the GE Tigers continue to display a strong performance in their statistics. That said, the team has been beating up on mostly mediocre to sub-par teams and has yet to prove themselves in this season by playing against Korea’s Big Three; SK Telecom T1, NaJin e-mFire and CJ Entus.

Bold means that stat is the highest in the role

Positive sign indicates a stat increase from the previous week and red negative sign a decrease. Black dash means the stat remains the same or a player that has played last week has not played this week.

Lilac and the boys pulled out a decisive 2-0 victory against Samsung who continues to under perform and look worse than we’ve seen in the preseason.

Although weekly stat breakdowns could convey a pattern or common trend in the long run, short term wise, it is guaranteed to lead to absurd fluctuations due to teams only playing 2 and at the most 5 games per week. Incredible Miracle is the biggest offender of this in week2 who were crushed by the GE Tigers in week 1 but did the crushing in week 2. As a result many of their players currently leads this week in KDA.

One of my favourite players to watch this season is Duke and so there may be a slight bias whenever I mention him but often he deserves it. Although losing to the re-emergent CJ squad, Duke continues to display a level of consistency which is why many observers consider him a top-2, or in my case the best top laner in Korea right now. It is no surprise that he currently holds 1st place in the MVP standings, being rewarded MVP 3 out of the 4 games NaJin e-mFire have won.

IM Wisdom obtained an inexplicably high Kill Participation at 95.8%. To put this number in context, of IM’s combined 24 kills this week Wisdom have been involved in 23. I draw two possible conclusions from this. One, Wisdom is an incredible underrated jungler who knows where to go at every step of the match or two; his team is unwilling or unable to make plays on their own. Considering IM has never been considered a top team for years I am willing to believe it is the latter.

Faker, Faker, Playmaker. At a glance, Faker’s stats this week are not at all extraordinary. If you cover up his name you’d probably think he’s just some average-tier mid laner whose only distinguishing stat is having the highest average kills for a mid laner (though admittedly he only played 1 game). This week Faker decided to play the immobile Syndra against a KT comp consisting of Lissandra, Lee Sin and LeBlanc; three champions with gap closing abilities with great ganking power. Faker was at one point 1/3/0 in this game but clawed back to a reasonable stat through some awesome, flashy plays and was deservedly awarded that game’s MVP.

Due to how much resources enemy teams often invest to bring down Faker, I am willing to believe that Faker will never have extremely good stats that you’d expect him to have.

Whereas Faker has a mediocre stat but a strong in-game presence, the opposite can be said for NaJin e-mFire’s Zefa. Subbing in for Ohq this week, Zefa put up some strong numbers with a 7.0 KDA and solid CS. Unfortunately this does not reflect his in-game performance where especially in the last game as a late game Tristana, there were numerous areas in which I thought he could’ve done much better to maximise damage output. Granted he was continually being chased by a Mundo who have been Sivir ulted and a LeBlanc but his performance definitely left something to be desired.