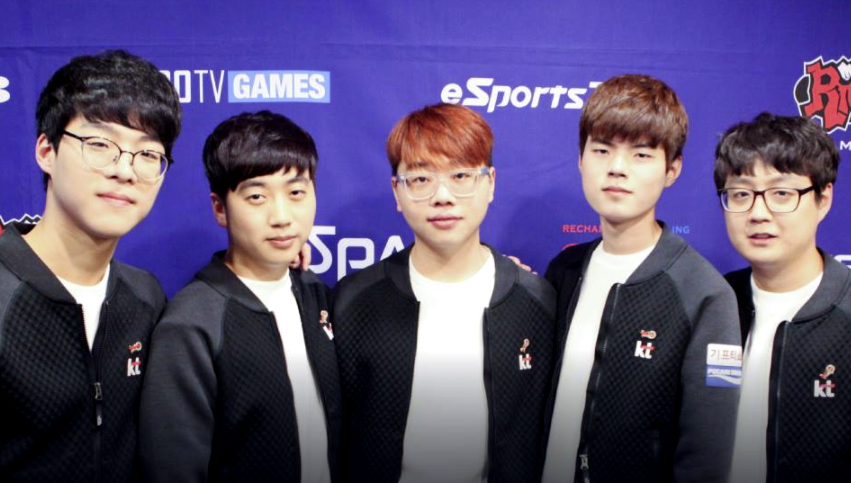 KT Rolster carried a heavy burden heading into the 2017 spring split. They assembled a roster of superstars and were expected to dominate the LCK. Expectations like that can be hard to play under, but for much of the split, they’ve produced the desired results.

The one team that seems to get under their skin? MVP, their opponent in last night’s quarterfinal round of the LCK playoff gauntlet. Using comfort picks and punishing mid game teamfights, MVP won both regular season series against KT, dropping only one game in the process.

Unfortunately, in the playoff best-of-five, MVP seemed to forget how they won those two series in the first place. The wonky drafts continued, as MVP picked extreme split-push compositions in games one and two. But they notably lacked sustained DPS and a comfortable way to teamfight.

For a while, it didn’t look like it would matter. They racked up a series of kills across the map in game one as KT played totally disrespectfully. Focusing on the mid lane, they were able to punish KT’s weakest laner, Heo “PawN” Won-seok, and picked up the mid turret for their troubles. The lead was such that the casters wondered aloud about KT’s mentality should they lose a game. Playing as a heavy favorite can tilt a team.

The problem was that KT built leads in the side lanes for Song “Smeb” Kyung-ho and Kim “Deft” Hyuk-kyu. The also had strong vision control of the river, key for neutral objectives. MVP’s regular season ward stats fell near the bottom of the LCK table, and it certainly showed in this one. Despite having a lead and priority over mid lane, MVP gave up river control and lost teamfights for it. These sequences are a bit unlucky for MVP, but they put themselves in bad positions due to bad vision control.

It’s unfortunate that ADC On “MaHa” Hyun-sik missed that arrow. But he was the only one providing sustained damage in fights. KT realized MVP couldn’t match them in power and started running them over. MVP won the regular season series by teamfighting as a unit, but they fell apart in the playoffs, picking neither enough hard engage nor enough damage.

That would be the story of game two as well. MVP racked up kills and focused the mid lane. Meanwhile, Smeb kept farming and became an absolute monster on AD Kennen. Nothing MVP tried worked. After top laner Kang “ADD” Geon-mo’s Sion failed, they threw mid laner An “Ian” Jun-hyeong’s LeBlanc at Smeb to no avail.

MVP got some kills on pathing errors from KT, but overall, had no way to fight and no way to match Smeb. Again, those sequences are a bit unlucky for MVP, but KT just picked a much superior team composition.

Game three would be the closest affair between the teams. MVP finally picked a teamfight comp with a tank top laner and Graves in the jungle. Just like in the regular season series, KT got strong pushing lanes which MVP smartly punished with flanks and collapses. KT’s macro decisions continued to puzzle as MVP controlled vision and won objective after objective.

And then in a turn of events that was truly unlucky, MVP grabbed an Ocean drake. But Baron was up and KT made a coordinated call to burn it down. After getting the Baron, KT turned on MVP and got nearly and Ace to gain control. KT had made ballsy, over-aggressive calls all series and it finally paid off in a big way.

That was the game. MVP dug themselves too big a hole with their failed drafts and poor team play in the first two games. KT continue to make puzzling decisions and take unnecessary risks, but in this series, their talent was sufficient to finally overcome MVP. But they’ll have to look much sharper in the next series if they want to make good on that super team label.