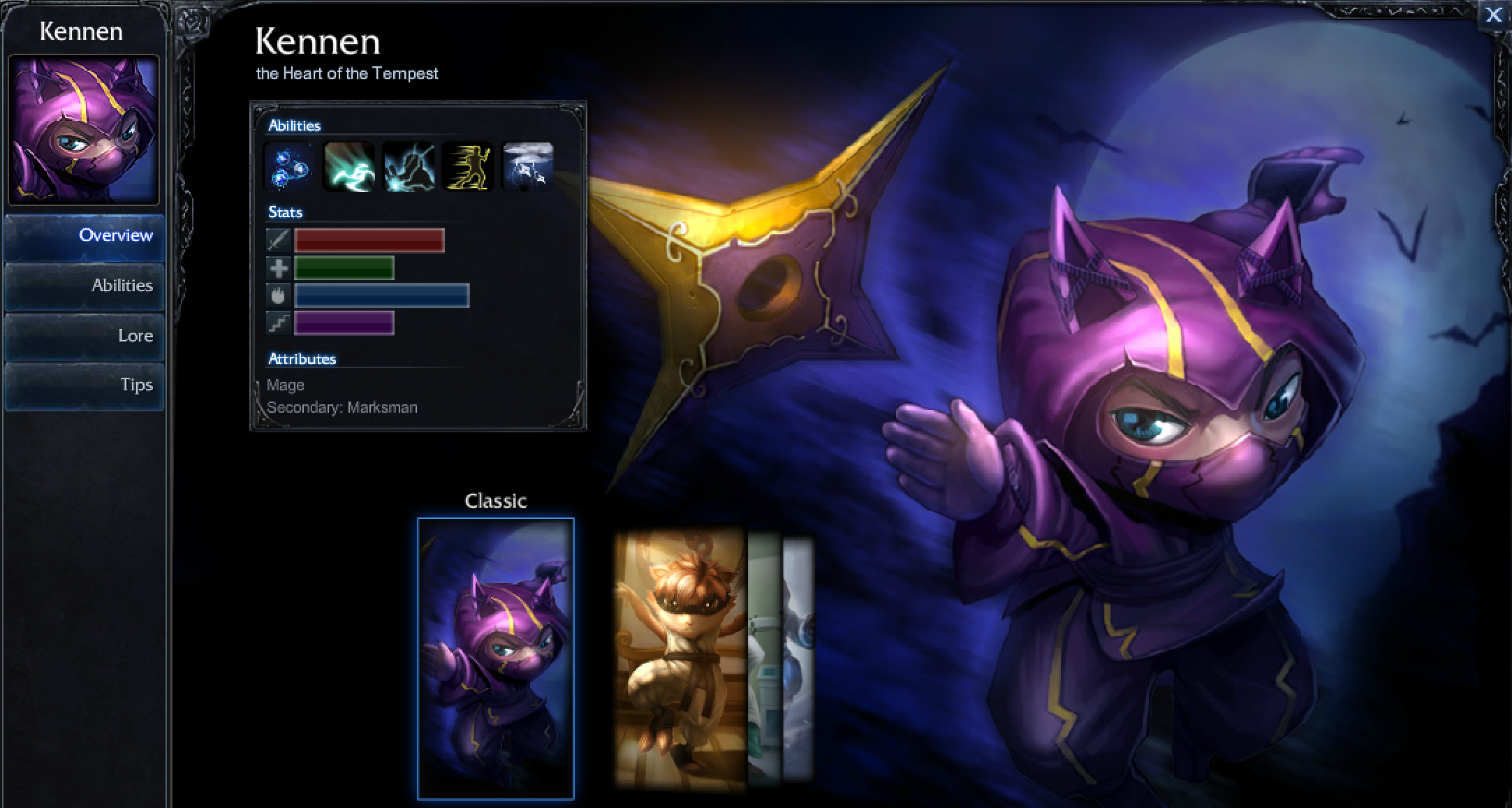 They say lightning doesn’t strike the same place twice. But in Kennen’s case, his effectiveness comes from his ability to strike not one place, but three. This year at the League of Legends World Championship, the champion Kennen has been surprisingly picked into three roles: top lane, support, and even AD carry. This has resulted in him being an extraordinarily powerful flex pick, often frustrating the opposition’s pick and ban phase. He is now contested as a pick; in this world championship, he’s been played 13 times and banned 4 times.

What is a Flex Pick and Why is it so Important?

In League of Legends, a flex pick is a champion that can go into multiple roles. Historically, flex picks are quite rare as most champions have a role they are obviously better suited for. Usually, flexes are played mainly in two roles such as Nautilus seeing gameplay in both support and top lane this season. However, even among flexes, the ability to play three roles is exceptionally rare, making champions like Kennen very valuable picks in competitive gameplay.

In competitive gameplay, the pick and ban phase can allow teams to win games before they even load into Summoner’s Rift. Thus, the pick and ban phase is paramount, resulting in teams hiring coaches to facilitate this crucial opening step of the game. Players can ban champions that they don’t want the opponent to play and then pick their own champions. Often times, players will try to wait and see what their opponent is playing in order to counter it. This is why the flex pick is so prevalent; if a champion is selected at the beginning of the pick and ban phase, the opponent still has no idea what role that champion is being played in, making countering it very difficult. In fact, the team that played a flex could even switch their original planned role for the pick if they see the opponent’s picks and decide they want a different matchup.

The best example of these pick and ban games was seen in the KOO Tigers versus CLG game in day 4 of the World Championship. KOO picked Kennen in the second rotation and CLG thought Kennen was going to be played support by GorillA. As a result, they picked Blitzcrank to hook KOO’s Ashe pick, thinking that Kennen was the support and couldn’t protect Ashe; KOO then picked Morgana as their support in order to counter Blitzcrank through the Black Shield. In later games, we saw Kennen played in the top lane and even as an ADC.

Kennen as a Top Lane

Top lane is the role Kennen has historically been associated with. Yet, ironically, at this tournament, he’s seen little play in this role, being played only by Smeb and AHQ’s Ziv in the group stages. This is in part due to many players liking him more in the support role and also in part due to the entire season being a top lane meta that was deemed unfavorable for Kennen. However, in the top lane, Kennen offers strong poke and powerful teamfights in late game with his huge stun potential and utility. His poke allows for some relatively easy laning matchups versus melee champions. Overall though, his weaknesses often makes it difficult to play Kennen in the top lane. He’s a relatively squishy top laner, meaning your team composition may not be as tanky as the opponent’s. His initiation is best started with Flash followed by his ultimate, Slicing Maelstrom, which can stun multiple enemies and singlehandedly win teamfights. Unfortunately, the Flash and Maelstrom combo can only be used every 5 minutes. While he can increase his movement speed, he has no proper dash or gap closer and can be poked or kited back. Thus, it’s often hard for him to reach the opponent’s back line and CC them.

Kennen as a Support

Kennen’s been most played as a support this season. Notably, he was used earlier in the season with Kalista as his lane partner. Kalista’s ultimate, Fate’s Call, fixed the issue of Kennen lacking an initiation mechanism. She could throw Kennen into enemy teams, combining both the AOE knockup and stun, thus solving Kennen’s biggest initiation weakness. SK Telecom was the first team to try this combination and it also saw play in other regions. For instance, Kennen was seen in the NA spring split finals between TSM and C9.  He was picked by TSM in games 2, 3, and 4 and was combined with Kalista in games 2 and 4. The reason Kennen could be played with another ADC in game 3 was because TSM had hard engage in the form of Sejuani; Kennen could simply follow up and as a result, his lack of an initiation mechanic was not as crippling.

This same pattern was seen at this year’s world championship. KOO paired Kennen support with Kalista in their game versus Yoe Flash Wolves in the group stages and so did Invictus Gaming. EDG’s Meiko played Kennen support without a Kalista; however, they tried running Gragas as the main initiator for the composition to cover for Kennen’s lack of initiation. When Kennen is played as a support, the team composition is highly predictable; it must always have an enabler for Kennen to get into the enemy team. The reason Kennen can work as a support pick given the right composition is that he has both a strong laning phase and doesn’t require a large amount of gold to perform his main role. Kennen has ranged poke in bottom lane, allowing for a lane with two ranged champions, which can be very frustrating for certain opposing matchups. Furthermore, Kennen does a fair bit of damage in lane compared to most other supports, yet he isn’t particularly gold dependent. Kennen as a support does not aim to do damage; he simply needs to survive and stun the opponents in teamfights. Since his focus is on utility rather than damage, no fancy expensive items are needed. This allows him to play well in the gold starved support role as long as he’s given the engaging tools for Maelstrom.

Kennen as an ADC

Undoubtedly, the most surprising role we’ve seen him in this tournament (God forbid we ever see jungle Kennen) is as an ADC, causing even some of the analysts to be thunderstruck when he was picked in the Fnatic vs C9 game on day 8 of group stages. Rekkles played him to great efficiency and we’ve seen him play it a few times since then as well. Now what allows Kennen to be an ADC? Is it because he can throw ranged projectiles, automatically making him an ADC? If that were the case, we’d be seeing Crittlesticks up on the world stage. No, Kennen surprisingly has a few things that let him work as an unorthodox ADC. Kennen is a bully and is good for split pushing because his hard CC allows him to be good in 1v1 situations. Most ADCs lack any hard CC or major utility, so Kennen has a lot going in that department. Furthermore, his W, Electrical Surge, is a skill reliant on hitting five basic attacks, with the fifth attack dealing magic damage based off Kennen’s AD. The early game damage on this can cause a surprisingly large amount of burst damage in laning phase, hence giving him the status of a lane bully. Although he builds as an ADC, Kennen still does a large amount of magic damage due to his skills doing magic damage, similar to Corki. However, unorthodox picks are often unorthodox for a reason; they often have weaknesses that are fairly obvious. Kennen has relatively low range for an ADC and falls off in the late game. Since he has no actual AD scalings aside from his W, along with his short attack range, his late game damage falls off and he lacks the magic penetration or AP to make his skills hit hard. Teams have to play around Kennen’s early game ability to bully because if a game lasts long enough, Kennen will have far less damage than the opposing ADC. This is even more prevalent when you consider how prominent Tristana and Jinx are, both of whom are extremely good late game scaling ADCs. So far, only Fnatic has picked up Kennen ADC. One of the reasons for this is that Fnatic is a team that isn’t overly reliant on Rekkles to carry a game. Fnatic is known for being a triple threat team; games can be carried by Huni, Febiven, or Rekkles. As a result, Rekkles doesn’t have to do as much damage as ADCs on other teams do since the rest of his team can carry the burden. As a result, he can pick a lower damage, utility heavy ADC like Kennen. Other teams may feel the need to always put their ADC player on a big late game hypercarry, but Fnatic has enough threats that they don’t need always need their ADC carrying their team. However, that doesn’t mean teams won’t pick up Kennen ADC. KOO’s ADC, Pray, has been playing a lot of Kennen ADC in solo queue, so this may be an indicator for more ADC Kennen play.

Kennen’s been gaining a lot of momentum as a pick, with more focus on him as the tournament goes on. In the knockout stages, Kennen started forcing bans; 3 out of 4 of his bans this tournament have been from the recent knockout stage games, EDG versus Fnatic and KOO Tigers versus KT Rolster. Teams are starting to place an emphasis on either banning or picking Kennen thanks to his flexibility and great utility making him capable of rounding out a variety of team comps. His ability to serve multiple roles in game, all while confusing the opposing team’s pick and ban phase have made him cause quite the storm in this tournament. Unfortunately with the worrying trend of banning Kennen, we may not see much of him for the rest of this tournament. In other words, the jungle Kennen dream is dead.