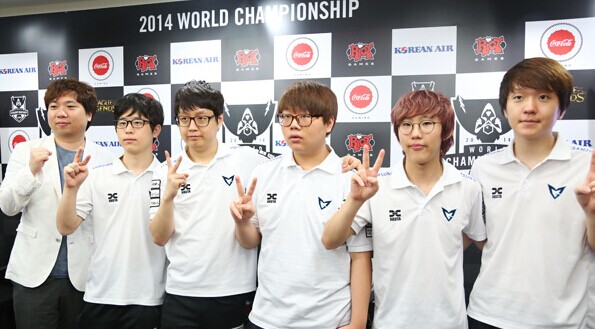 Interview with Samsung White after Quarterfinal – IMP said he will destroy Deft if they play against SSB in semi-final.

Q: In the second inning, SSW played with a different lineup. Can you tell us why you pick Singed? Have you prepared (or practised) to use it before the game?

Looper: No, I have not practised using Signed before, I just felt Signed would be a great counter to their lineup and I was feeling pretty confident at that moment.

Q: Why did you choose a team comp with Jayce and Ryze in the first match?

Pawn: I believe Jayce is a very stable champion and I am very confident with Jayce.

Looper: Since Alistar, Maokai and Rumble were all banned, I thought Ryze would be a good carry.

Q:After your 2:0 lead, you choose a lot of Champions that require late game development in the third game but you lost at the end. Can you share with us the reason behind this selection?

Mata: We decided to pick Champions that focusing on the end game stage because we feel we can carry in the final stages of the game.

Q: What will be your strategy to win if you have to fight against your sister team SSB in semi-final?

Mata: I believe mental toughness is most important. We often feel a lot of stress, but I believe we will be great if we can perform normally.

IMP: We don’t really have any special strategy. We will be okay if we can stay calm and use our usual game plan.

Q: What do you think of the reason for losing the third game?

Mata: Like I just said earlier, we selected champions that were late-game oriented so we are weaker in the early game. That is why we lost the game.

Q: What is your prediction on the game between SSB and C9? If SSB win, IMP will have to play against. Will you be will be lenient on Deft ?

IMP: First of all, I believe SSB will have a smooth victory [against C9]. Deft is very popular but if I have to fight again him, I will bust him (laughing).