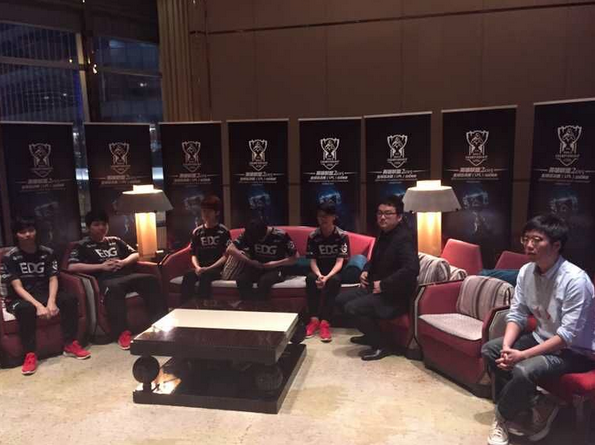 Let’s talk about White and Vasilii’s streaming situation. TBQ, you’re known for acting as sort of a mediator. If you were faced with something like that while streaming, what would you do?

TBQ: I can’t do that. I’m not as generous as those two. If it were me, I would’ve just ignored it.

GODV, we’ve heard rumors you’ve beat Faker before in solo queue. Lots of fans have talked about it. Now among the S5 mid laners, where do you think you stand?

For a period of time, it was said you went to Hang Zhou to train. How has training been lately?

Pyl: Not that great. The internet has been too laggy. But we still wonder why these European teams are so strong!

This year is EDG’s chance to win the World Championships. If this year EDG wins, will Clearlove consider retiring?

Clearlove: Of course not. If we win, I’ll definitely continue playing. We’ll talk about retirement later!

A lot of people think these patch changes have made Garen a nausea inducing champion to play against. AJ, do you think you’ll have a chance to pull out this champion on the world stage?

AJ: Of course…….(after a moment of contemplation) ah, forget it! We’ll see when we have a team composition. If the opposition has Vayne, I won’t pick it even if I die!

During MSI, your bot lane destroyed SKT’s bot lane – do you have confidence this time?

Meiko: After the summer split, SKT has been fine tuning their bot lane, and they’ve gotten better. We haven’t recently played with them, so we’re not too clear. We we believe we can win playing against them, though.

Let’s talk to Zz1tai and Rookie first about their hair color!

Zz1tai: Don’t blame me. Originally, my mom said my hair was a bit yellow so I went to go dye it a different color. When I came back, I didn’t know Rookie would also change his hair color. We didn’t discuss this together!

Rookie: I wanted to dye my hair a light red, but I didn’t think they’d give me bright red. But I still like it. It’s just that when I came back, Zz1tai also changed his hair color. I was so surprised! Now we’ve turned into the BUFF BROTHERS!

KaKAO, will you prove that you have the strongest mid/jungle synergy in the world by camping mid?

KaKAO: No, I’ll prove I’m the best by destroying our opponents in all three lanes. That’s why I play jungle.