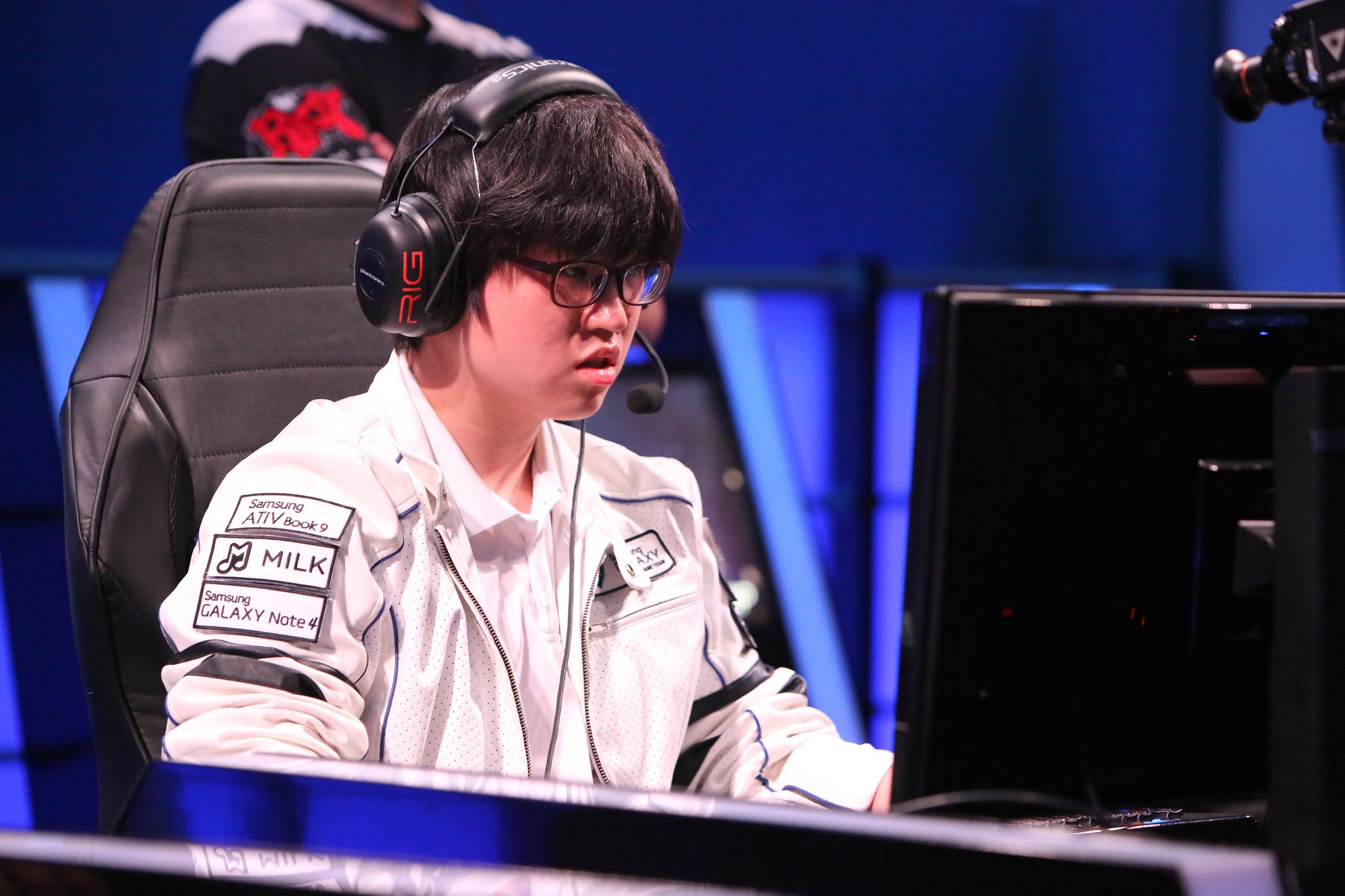 The inaugural InsightOnEsports End of Year Awards will recognise the best teams, players, games and plays of the 2014 in competitive League of Legends. In this, the second of three parts, the best players of the year will be announced, along with the reasoning by those selections. To get a more in-depth look into how we arrived at our selections, MonteCristo and I have recorded a video discussion.

Korean Player of the year

Reasoning: Dade’s play elevated Blue into the best team of the year. His team-fighting was spectacular and he stood out as one of the highest impact carries of 2014. In White he made the final of the Winter season and then in Blue he helped Blue to a convincing OGN Spring title, becoming the first player to win OGN titles with two different teams.

In the Summer season, Blue lost the closest OGN final of all time, but that outcome was so close in large part due to Dade still delivering a high level performance. His Worlds was a little underwhelming, never quite producing the miraculous games he had made a staple of his play in Korea, but nevertheless, none could truly stand against Dade across the board this year.

2014 was the year in which Mata proved he was a god of the Support position. Incredibly consistent, never finishing below third in any of the tournaments, he was a core component of White’s incredibly high level of play in all competitions.

Most Improved Korean Player of the Year

Reasoning: Deft had the highest impact of the players who improved in 2014, but PawN was stricly the player who made the largest leap. The mysterious kryptonite of Faker in 2013 transformed into a truly elite level Mid laner and established his game, across a wide pool of champions, against the rest of the world’s top Mids.

Deft was always good, but nobody knew he could be this good and this impactful at the highest level. Dade’s play led Blue, but it was Deft’s which closed games out and made his Blue side near impossible for other teams to defeat once the team-fighting stage of the game had arrived.

Chinese Player of the year

Reasoning: NaMei consistently the best player for the entire year, as the primary force on the best and most successful team. His Worlds was very underwhelming, but his performance in the 10 domestic competitions not only secured his EDG team eight of 10 Chinese titles, including both LPL, but also ensured they never fell below second. One of the most dominant domestic players in any region in the history of League of Legends competition.

Gogoing was the man for OMG and truly established himself as the carry of the team, where the mercurial Cool and LoveLing could be spectacular but also lacklustre. Gogoing’s Worlds play showed the extent to which he had established himself as one of the world’s best, putting up the second best Chinese performance of the tournament, even showing up Korean carry star Save in the process.

Most Improved Chinese Player of the Year

Reasoning: Zero in Korea was a prospect at best, but in China he brought a hard-peeling style that allowed Uzi’s true potential to be unlocked and made the play-making ADC close to unbeatable in lane. U was the secondary carry of EDG, who won the splits and consistently were a near-unstoppable force in Chinese LoL.

North American Player of the year

Reasoning: Meteos evolved in Spring, showcasing an ability to play the low-economony pressure-ganking style the Koreans had pioneered in 2014. His Summer split and Worlds were a little underwhelming, though certainly not bad. At IEM San Jose, he showed he had added in a degree of mastery on Jarvan and Lee Sin, making him truly the most complete Western Jungler and a star level player once more.

Bjergsen’s highs were spectacular, but his Spring split had its share of problems and he only really got it all together towards the end of the Summer split. Worlds was good but not outrageous and IEM San Jose closed the year on a sour note for the Dane. Despite an overall spotty run of farm, no carry player was more dominant in the region than Bjergsen and no other players could truly challenge him for the second spot here.

Most Improved North American Player of the Year

Reasoning: Sneaky became a key carry in the latter half of the year, where previously it had been Balls and Meteos who led the way in terms of raw impact in a game. Aphromoo took the steps needed to be an elite Support, at least for the majority of the two splits, with a lull around some of the play-off games, admittedly.

European Player of the Year

Reasoning: Froggen was consistently high level and contending for best player in Europe in both splits. Rekkles was also in contention, though his LCS title winning split could not compare to Froggen’s dominance. Worlds was a wash for both and Rekkles had the edge in IEM performances, but Froggen proved too consistent and too crucial a component of Alliance over the year.

Most Improved European Player of the Year

Reasoning: Jankos was essentially a nobody in 2013 and yet finishes 2014 as the best European Jungler. Compared to the other big names in his region (Shook and Svenskeren), Jankos was working with scraps and yet making miracles from such limited resources. The master of first bloods, Jankos showed a progression which was deceptively impressive over the year.

fredy122 played like a Korean Acorn, showing us a kind of carrying that had little to do with damage and kills and everything to do with always making an impact on the team-fight and always posing problems for the enemy to deal with.

Eastern Top laner of the Year

Reasoning: Acorn had two of the strongest carries of the year in the other lanes (Dade and Deft), but after them he was the next reason for Blue’s excellence. A true facilitator, the master of zoning also had a period, primarily during the Spring season, where he shockingly bested Save in lane in the final.

Gogoing was the sleeper carry of the year, emerging from the murky mists of China to shock the international scene with his powerful Top lane performances.

Western Top laner of the Year

Reasoning: Balls established himself as more than just the Rumble specialist this year, with plenty of carry performances against numerous opponents and across the tournament circuit. With Hai and Meteos having their lulls over 2014, Balls was relied upon and delivered many a top showing.

fredy122 was a revelation, showing a kind of tank presence not seen in Europe since Zorozero still marched through the top of the map.

Eastern Jungler of the Year

Reasoning: Both were true gods of the position and both won big titles over the year, but DanDy simply had too much going for him in terms of accomplishes over 2014. KaKAO’s magical Summer season cannot compare to his worthy rivals in amongst the trees.

Western Jungler of the Year

Reasoning: Much as with the Korean case, both were spectacular but Meteos played in international competitions and was able to garner more key performances as a result.

Eastern Mid laner of the Year

Reasoning: Dade was the Korean player of the year and really broke incredible ground over 2014. Reaching all three OGN finals and the semi-final of Worlds is simply too much, to the extent even the masterful 1v9ing and hard carrying of Faker, who found himself bereft of elite team-mates, could not match Dade’s 12 months.

Western Mid laner of the Year

Reasoning: Denmark ruled the Mid lane in the West for 2014. Froggen’s consistency, performance under pressure prior to Worlds and complete package play was too much for the West to deal with. Bjergsen showed us his talent extended beyond simply highlight plays, leading TSM to an LCS title. Both won titles, but Froggen’s was more dominant and comprehensive.

Eastern AD Carry of the Year

Reasoning: Both played a similar style, but Deft produced the better Worlds finish and NaMei’s failure cost him a chance at winning this award, all things considered.

Western AD Carry of the Year

Reasoning: Rekkles had a statistical year few ADCs in the West could dream of and performed in games at every tournament he attended. Sneaky was not quite the same carry, but managed to establish himself as the consistent anchor of C9’s success over the year.

Eastern Support player of the Year

Reasoning: Mata is the god of Support and by far the best in the world on all levels. GorillA showcased innovation, showing the world how Janna could be played in the modern day, and worked with the least skilled ADC of any name you might like to put forward for such an award.

Western Support player of the Year

Reasoning: YellOwStaR was the complete package for Western Supports and had the level of results to back up a firm first place finish in this category. Xpecial won by virtue of his pressure performance play and individual level putting him ahead of other candidates for the second spot.

Most Improved Eastern Player of the Year

Most Improved Western Player of the Year

Reasoning: Jankos really did take a huge step up, while Sneaky refined his game and added more impact to C9’s victories.

Western Rookie of the Year

Reasoning: Jankos had a phenomenal debut season in the top tier. As a rookie, at least on paper, Shook’s deficiencies didn’t hold him back from some huge games a worthy mention on this list.

Eastern Rookie of the Year

Reasoning: U was nobody in 2013 and in 2014 he was the second star of an EDG team which delivered an unheard of level of consistency in the Chinese region, the likes of which can only be compared to the great WE team of late 2012. Rookie at times looked like an elite Mid, even if his form could be as spotty and fluctating as his team’s.

Most Improved Player of the Year

Player of the year

Part three, addressing the best games and plays of the year, is pencilled in for later in the week.