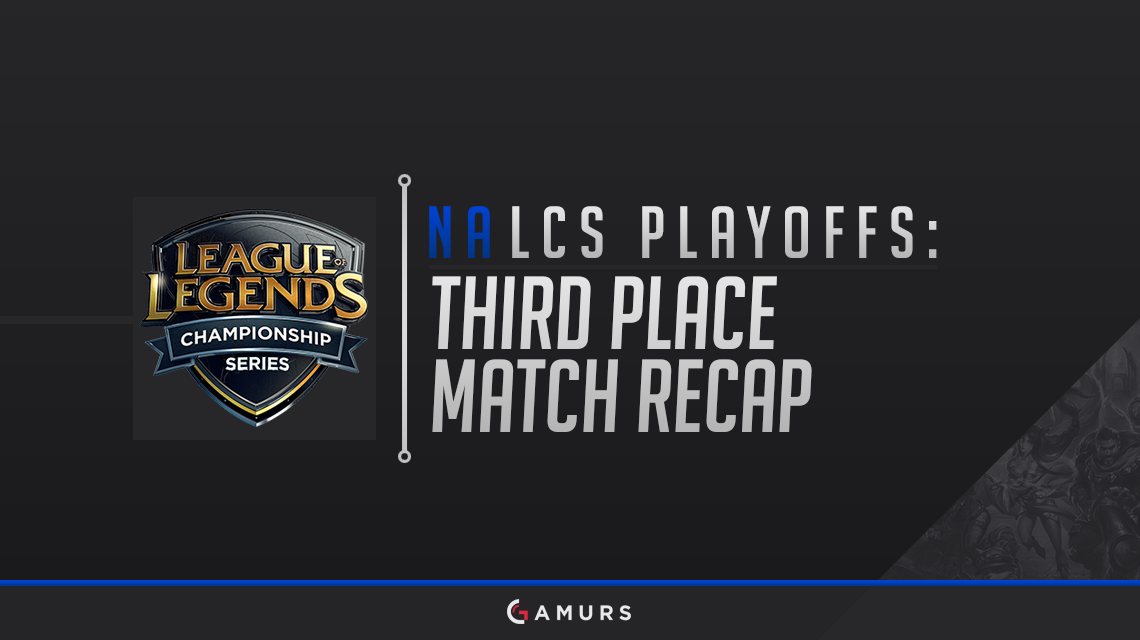 Here is what happened in the third-place match:

This game was madness. Going into the series, most, if not all, major analysts predicted a relatively easy win for Immortals. This squad was thought to be better, almost without a doubt. In game one, CLG came to shut the critics up.

Choi “Huhi” Jae-hyun had a 14/1/12 on Syndra and Trevor “Stixxay” Hayes went 13/4/9 on Jhin, leading CLG in a bloodbath win. CLG took an early lead and ran, sprinted, with it. CLG snowballed and took advantage of every little mistake that Immortals made. This game lasted a while, but CLG was in complete control from start to finish, though some of the teamfights were a little too close for comfort.

Almost the complete opposite of game one for a majority of the time, game two was slow and steady… until it wasn’t. The final 15 minutes of the game held constant fights, and the game ended purely on two clean teamfight wins from Immortals. The team adapted and bounced back from the game one thrashing.

Jason “WildTurtle” Tran, the hometown hero, led the charge with an 8/1/5 performance on Sivir, defending his home turf and refusing to continue being humiliated as an Immortal in the playoffs.

Game three was a more back-and-forth affair than the previous two games, as the lead changed multiple times and neither team had a really solid hold until Immortals did near the end of the game, but a Baron steal for CLG meant that this game was not over yet. After the play, CLG was scattered and Immortals took advantage of it, won a fight and pushed to the nexus for the win.

Heo “Huni” Seung-hoon’s 4/0/9 performance on Ekko, as well as Eugene “Pobelter” Park’s 8/2/7 performance on Vladimir led Immortals in this extremely tight game, coming down to the wire and giving Immortals the 2-1 series lead.

Wow. That was INTENSE as @Immortals take game 3! Match point is theirs going into game 4! #NALCS pic.twitter.com/uw3ktBXQmR

Game four was not very pretty for either team. It was a bit of a fiesta. Still, CLG relatively dominated this game and took the win to force a fifth game in the series.

It was a weird game, but everyone on CLG had ridiculously impressive stats. For this match, we’ll highlight the jungle, where Jake “Xmithie” Puchero took Kim “Reignover” Yeu-jin’s comfort pick and absolutely destroyed him with it.

This whole series was ridiculously close, up until the fifth game. This was almost pure domination from one man: WildTurtle.

Immortals decimated CLG in this final game, as they won every lane and the jungle. WildTurtle had a stellar 7/1/5 performance on Ezreal, winning in his home country and showing off his patriotism.

Congratulations to @IMTWILDTURTLE on his victory on the Canadian stage! #NALCS pic.twitter.com/RJg45ItFxf

What a series! @Immortals are your 3rd place #NALCS team! pic.twitter.com/ga3xVCCj3j

With the win, Immortals secured third-place in the 2016 NA LCS Summer Split, but they did not guarantee a spot at Worlds. If Team SoloMid defeats Cloud9 tomorrow, CLG will be headed to Worlds and Immortals will be playing with the top seed in the gauntlet (along with Cloud9 playing with the second seed) to fight for the final North American spot at Worlds. If Cloud9 beats TSM, CLG and Immortals will both be headed to the gauntlet, and CLG will have the higher seed.