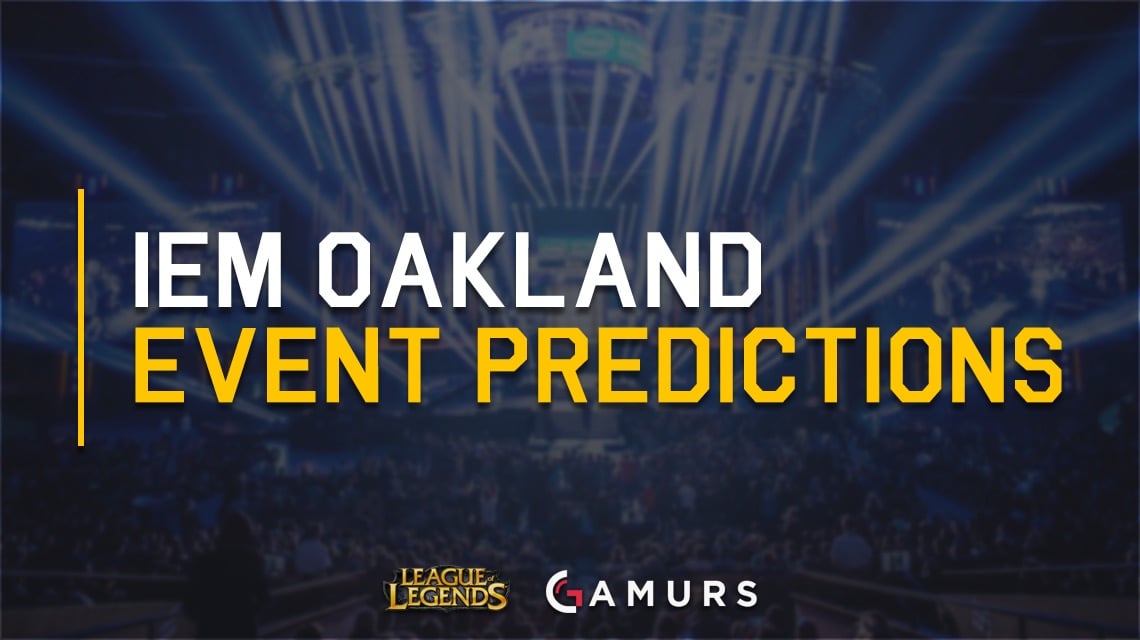 As the League of Legends portion of IEM Oakland approaches, LoL fans can rejoice (sort of).

The six-team tournament (originally eight) was supposed to be a grand international showing during the offseason, with eight of the world’s best teams showcasing their abilities after the World Championship. However, because of how quickly the tournament came up after Worlds and how little time teams will have to prepare for next season, Oakland has seen numerous teams pull out of the tournament.

This is the lineup heading into the weekend:

TSM, Flash Wolves, INTZ and the Chiefs were in the original lineup, and still made it to the party. In place of Splyce, the Unicorns of Love ride in from the EU LCS, and in place of the Afreeca Freecs, Longzhu flies over from the LCK. No replacements were found for Immortals (NA LCS) and I May (LPL). UoL and Longzhu are, even if this is a bit harsh, somewhat of laughing stocks in their respective regions. UoL has constantly been made fun of for its name, inconsistency and bad play. Longzhu tried a 10-man roster last split, and ended up as one of the worst teams in Korea. Still, this tournament can be competitive, since TSM and FW are fielding substitutes, and INTZ and the Chiefs are wild card teams. No disrespect intended, of course. We’ve all seen what wild card teams can do (looking at you, Albus NoX Luna).

It may be competitive, but it probably won’t be pretty.

Cutting the field from eight to six teams means that there will be no group play, and two teams earn a bye. Based on their performance at Worlds and in the 2016 Summer Split, TSM and FW are guaranteed a spot in the semifinals on Sunday.

Without further rambling, let’s hop into my predictions for the tournament.

INTZ made waves at Worlds as a wild card team by taking down EDward Gaming, China’s No. 1 seed and a favorite to win it all, on the first day of the tournament. INTZ never won another game, bombing out in the group stage. Unicorns of Love come into IEM Oakland with something to prove. The squad failed to qualify for Worlds, and is itching to prove itself on the international stage.

INTZ may have beat EDG and won the top seed in the wild card qualifying tournament for Oakland, but this squad is not an international threat. That being said, UoL isn’t exactly the scariest bunch to come across. We have yet to see this team on the current competitive patch, built for stronger laning phases. For the element of surprise and a probable strong laning phase, we have to give this matchup to UoL. It could go either way, but UoL has the edge in my book. Just slightly. No sweeps here.

These teams are both total question marks heading into Oakland. In trying to qualify for Worlds, the Chiefs went 3-4 in the 2016 International Wild Card Qualifier, losing to Albus NoX Luna, Dark Passage, Lyon Gaming and Rampage. Perennial powerhouses of the OPL, the Chiefs will be looking to finally prove themselves to the big dogs. When it comes to Longzhu, what can you say? Longzhu has a 10-man, star-studded roster acquired during the offseason before Season Six began. A lack of synergy and consistency has been clear, however, as the squad only finished in seventh and eighth place in the Spring and Summer splits respectively. This was in the LCK, though, and we know how good the Korean teams are.

The Chiefs and Longzhu both come into this tournament as unknowns to most of the world. If you follow LoL, you probably recognize a few names on Longzhu, like Lee “Flame” Ho-jong or Shin “Coco” Jin-yeong, but you’re likely unfamiliar with the team as a whole. Likewise, you probably don’t know anything about the wild card Chiefs. The Chiefs are the best team in the OPL, and for good reason. While this is true, and Longzhu is currently a bottom tier Korean team, this series probably still won’t be too interesting. Longzhu is still better than many western teams, and only missed the playoffs (three-way tie for sixth place) by one game in the Summer Split. Expect Longzhu to win this one, whether it’s a 2-0 sweep or 2-1.

North America’s darling child… blah, blah, blah. If you read any of my stuff, you’ve heard me go on and on about TSM failing completely at Worlds, playing incredibly far below expectations and bombing out in the group stage. Regardless, this team is still strong. Yiliang “Doublelift” Peng is taking a break for the upcoming Spring Split, so TSM is without its star AD Carry. In his place, Jason “WildTurtle” Tran, ADC for Immortals during Season Six, returns to TSM for Oakland. While everyone involved has made it clear that WildTurtle is not Doublelift’s official replacement, it’s still nice to see an old, friendly face back on TSM, breathing new life into the team.

If this match were to happen during the 2016 Summer Split, I’d give the sweep to TSM in heartbeat. Now, things are less clear. This series, and TSM’s tournament, hinges on whether or not WildTurtle and the young Vincent “Biofrost” Wang can mesh in lane and show off their talents. If they can gel, this could easily be a sweep and TSM would be well on its way to winning the tournament. If not, TSM will need to heavily rely on its three other members. Either way, TSM should win this one, but it could be close.

This series could go either way. My gut says Longzhu wins, but my brain says the Flash Wolves walk away victorious.

Why go with the Flash Wolves? They may be playing with subs, but those two subs are replacing arguably the two weakest links on the squad. Shen “Rins” Po-Ju (top) and Lu “DoubleRed” Yu-Hung (ADC) are playing in one of the most important tournaments of their careers, and could solidify spots on the starting roster over Yu “MMD” Li-Hung and Hsiung “NL” Wen-An if they play their cards right. Rins and DoubleRed may very well be upgrades, and the keys to Flash Wolves becoming a true international powerhouse. Aside from that, the Flash Wolves have Huang “Maple” Yi-Tang and Hung “Karsa” Hau-Hsuan, and those two alone are enough to make any team nervous. It could be close, but the Flash Wolves have the upperhand here.

I may be a little biased still, and I freely admit that, but TSM should win this tournament. WildTurtle is a strong ADC, and Biofrost should be able to adapt well enough to play with him in lane. This team is still one of the best in the world, despite its terribly awful showing at Worlds. I won’t go as far as saying TSM is a “top-four” team because they had a tough group with Samsung Galaxy and Royal Never Give Up, but looking at the competition here for Oakland, no one should stand in TSM’s way besides themselves.

For the final against Flash Wolves, TSM only needs to put its faith in its duo lane. As I said earlier, this tournament likely hinges on the ability of WildTurtle to mesh with the team, and with his support. If he can fit, no one should stop this team from winning. And even if he can’t fit, the opposition may just be weak enough for the rest of TSM to carry the organization to victory.

Who do you think will win this event? Let us know your thoughts in the comments below or tweet us @GAMURScom.