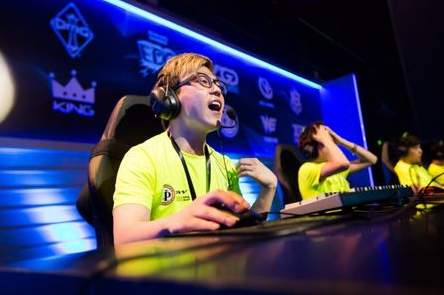 When you first came to China, you played in the LSPL. Now that you’ve qualified for the LPL, how do you feel playing on the strongest stage in the world?

Heart: At the time, when I arrived in China, my other Samsung teammates got to compete in the regular season on the best teams. When I first started, I was pretty unhappy because I felt like I should’ve been the one competing on the LPL stage. But after going through a season in the LSPL, I felt like our team would’ve definitely suffered a crushing defeat if we had gone straight into the LPL. That’s because of team synergy issues, etc. But after disciplining ourselves in the LSPL, we were able to overcome these issues.

A lot of fans always put you and Mata together because of your play styles or the way you lead your teams. Mata can even be considered a coach for VG. Do you feel like you play the same role?

Heart: I feel like it’s half and half. I try hard to work with the coach and arrange things with the team. At the same time, we collaborate well together.

This season’s LPL has so many outstanding supports. We have veterans like Mata and Pyl, and we also have new players like Meiko. As Korea’s strongest support, where do you think you place with the other supports in the LPL?

Heart: I personally don’t think I’d even rank myself [as Korea’s strongest support]. I feel like I’m a support that relies heavily on my team. If the team plays well, then I’m able to show an exciting performance too. My strength is closely related with the team. And in terms of ranking myself among other supports, I don’t really care about that.

Every team has shown immense improvement during the LPL’s summer split. What is UP’s goal for the summer split, coming into it as a new team that’s just qualified for the LPL? How do you think your record will look?

Heart: It’s not so much of a goal as it is our reality. I feel like right now, with our current situation, we want to keep our stay in the summer split. That’s our biggest goal. But after looking at today’s games, I feel like this goal isn’t too hard to achieve. I feel like the matches with the teams after today have a lot of potential.

You’ve already come to China for half a year. Are you used to the Chinese standard of living?

Heart: After coming to China for half a year, even though I’m not 100% adjusted, and even though I feel like there’s a lot to improve in terms of communication with Chinese players. I feel like right now I’ve adjusted pretty well.

Heart: In terms of the game, I pretty much know how to use the Chinese terms really well!

Now that you’ve qualified for the LPL, you’ll be bumping into your old Samsung teammates again. Do you have anything to say to them, as a competitor?

Heart: To be honest, when I was playing in the LSPL, my old Samsung teammates would all watch my games. They would encourage and support me. Now that I’ve formally entered the LPL, I’m hoping they’ll try their best to give me a break. Let me stay in the LPL!

Thank you Heart for accepting our interview. We believe, with your strength, you’ll be able to stay in the LPL!