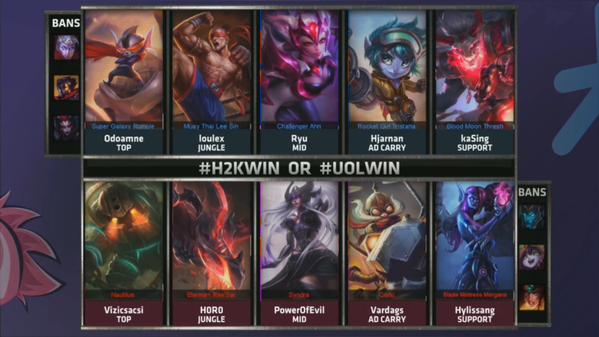 Coming up into this match up both H2K and Unicorns of Love came from crushing defeats against Origen and Fnatic and that  made this series so important, as the winner would have a very high chance of getting second seed for Europe at Worlds.

The first game was very surprising to me since both teams showed a good gameplay and that both had been preparing very well for this match and we saw a classic UOL comp with Power of Evil’s Syndra and Hyliisang’s Morgana against a very comfortable comp for H2K with a lot of comfort picks. H2K started well the early game of game one getting two turrets out of UOL on the laneswap and they were looking to gain control over UOL’s jungle but they didn’t quite get it. The mid game was all on UOL getting picks here and there but H2K keeping up always ahead or even on gold. Kasing played very well with a lot of roams during the early game but that was all stoped by the Morgana that we saw banned following games in the mid game. Both teams executed great teamfights on the mid game, specially the one 30 minutes in were anyone died on H2K jungle.

UOL was very committed to forcing Nashor all game long, and sometimes it payed of but on the lategame, H2K capitalized and pushed their advantage with a very strong Tristana from Hjarnan, 60 CS ahead of Vardags’ Corki and a precise Ryu who stepped up his game on the mid-late game. The first of the series was won by H2K but on one of the closest games we’ve had in the EU LCS and a very good performance by both teams.

Coming into game two UOL decided to come up with the Gangplank, who would get fed early on skirmishes without even landing half of his barrels, and a different composition with a lot of globals but didn’t quite work out. It didn’t start any different than the previous one but this time H2K was making the plays on the laneswap much earlier against H0RO’s predictable pathing on their weak side of the map on two occasions: invading and counterganking the Evelynn. H2K would get a solid 2K lead that wouldn’t go down beyond that point anymore during the game were they were always ahead. Very sloopy from H2K though and showing, on this second game more than on the first, why Origen was able to beat them. The quality of the team fights this game was disappointing compared to what both teams had showed on game 1 of the series and also the UOL laneswap was horrible yet again.

In the third game UOL tried to contest H2K comfort picks of the previous two games but they picked a weird composition for themselves, relying on the late game so much. And for third game in a row, H2K got the early advantage but this time it came from good Ryu roams and Power of Evil unable to contest or apply pressure mid. Hjarnan with a stellar performance this time around with a signature champion like Sivir which, honestly, you can’t leave open against H2K. Even loulex looked like a beast on that third game, this is how one sided it was – let’s be honest, he snowballed well. It was the cleanest game of the series as H2K snowballed to victory 3-0 with some misplays and overextends.

H2K outdrafted UOL overall as Power of Evil didn’t get a good champion to carry and they didn’t get Sivir any game, which exposed Vardags a lot. H2K clearly have that early game that was lacking for them before but still struggle to transition into good rotations and are far from their best level and to compete against world-class teams they will need to improve a lot.

Only an unlikely Origen victory against Fnatic would prevent H2K from Worlds. In general a great season for H2K, as they got top 3 on both splits against all the odds coming in from the Challenger Series. Honestly I feel like H2K might struggle against world-class teams as they seem to have many weakness and very punishable ones. Nevertheless, I expect from pr0lly’s boys good preparation for Worlds and have a good showing there. Many questions in my mind towards their performance at the international stage: how will Hjarnan stand against imp or Deft?, will junglers like KaKao or Clearlove punish loulex more? It makes me even more exited for Worlds this year.