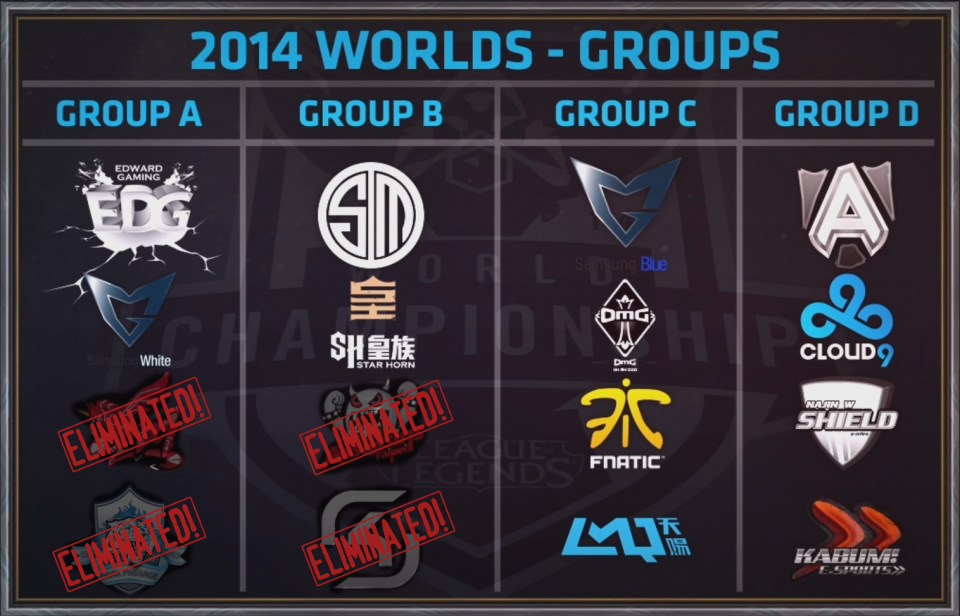 The first week of the Season 4 World Championship kicked off with a bang as the Scene was rocked by a game-changing ban of SK Jungler Svenskeren for choosing a culturally insensitive name for his Taiwanese account,, tossing all prior predictions out the window and altering the landscape of Group B. While in Group A, a Championship favorite survived a brush with elimination to qualify for the quarterfinals.

Billed the Group of Death by Pundits, it was widely assumed that SSW and EDG would sail out of the group unscathed but for their matches with each other. And for the first three days, things went all according to plan. SSW brooked no challengers, never coming remotely close to losing any of their matches, while EDG looked strong against every team but the Korean Jauggernauts. AHQ looked average, and Dark Passage just enjoyed the ride. For the casual fans, it would have been easy to ignore the warning signs that culminated in an explosive day 4. But for the close observer, it was growing increasingly clear that something was wrong with EDG. Namei playing less than his best, and possibly sick, Fzzf’s weird builds, and a general lack of aggression from all members sapped any excitement out of their matches against SSW. For a team expected to challenge for the Championship, their inability to challenge SSW was alarming. And the final day of the groups would prove nearly disaasterous.

AHQ, like Dark Passage, entered the Group Stage with zero expectations. Paired with two teams billed as the strongest from their respective regions, little was expected of either team. But the thing about low expectations is that it’s extremely freeing. Time and again, teams have proven on the world stage that a lack of expectations isn’t a hindrance, but a boon. And unlike Dark Passage, AHQ entered Worlds as the number one seed of a region steeped in eSports lore. They were not to be taken likely.

The fourth day of the Group Stages dawned with with EDG sitting pretty at 3-1, their only loss being to SSW, while AHQ sat at 1-3, with two losses to SSW and a prior loss to EDG. A cursorary look at the standings would have led most fans to assume that AHQ was already eliminated. A 2-game deficit with two games to play, one against a team that had previously steam rolled them, would have seemed insermountable. But in a group where EDG and AHQ each had two guaranteed wins, and two guaranteed losses, the entire outcome of the group would rest on their own 2 game set.

AHQ took care of business against Dark Passage in their first game, moving them within one game of EDG in the standings, and suddenly that deficit looked much smaller. After all, anything can happen in a single game. And anything did. The second match between AHQ and EDG was the best match of the entire Taipei Stage. We had Green Tea landing every single hook, threading the needle to snag Namei in what would prove the turning point of the match. We had a new Zed god rising in Westdoor, highlighting the weakness of EDG’s mid laner in a World Championship featuring the greatest collection of mid laners ever assembled, even missing the G.O.A.T Faker. We had FZZF with Ardent Censer/Meija’s Janna (I have no words). And we had AHQ desperately closing out the game before EDG could fully spawn, with two members left standing as EDG’s nexus exploded, their blinking health bars telling the tale of just how close the game was.

After Worlds ends, we may look back at this game and remember it as the wake-up call EDG needed to reach their full potential. Or we’ll look back at it as the game that exposed the glaring weaknesses within a fatally flawed team. Judging by how EDG responded in the tiebreaker game, I have a feeling it may be the former.

When the Group Draws were announced, Group B was widely considered the most balanced of the four, with each team having clearly defined strengths and weaknesses. SHRC was talented, but strategically flawed. TSM had excellent solo laners, and an improving Pick & Ban phase, but a weak bot lane, and exploitable jungler. SK Gaming was strong strategically, and in the Pick & Ban phase, but lacking in overall talent. TPA had Bebe, billed as the strongest ADC in the group, and a strong jungler in Winds, but a history of poor performance on the international stage since their S2WC victory.  The community preped for a wild weekend, with fans of each team praying that theirs would rise to the top.

And then Svenskeren, SK’s star Jungler, was banned for the first three games of the groups for choosing a racially insenstive name for his SEA account. It’s hard to judge the harshness of the penalty as it’s largely unprecedented in the scope of the World Championship. The length was dictated by the necessity for the punishment not to give any of the other teams an advantage. Thus, it had to cover one game against each team to be fair. In the end, I think Riot found the best balance between punishment, and fairness under the given circumstances.

Svenskeren’s ban sapped most of the excitement from a group that, in hindsight, featured a large amount of misplaced expectations. Bebe, and TPA were clearly over-rated by everyone, something we can clearly attribute to TPA’s past success at the World Championship. Their solo laners struggled to compete, and their inability to close out games was readily apparent. SK Gaming, hamstrung as they were by Svenskeren’s punishment, were left to play Spoilers against a TSM that, with the chance to force a tiebreaker against SHRC and possibly avoid SSW in the quarterfinals, imploded in spectacular fashion. That entire second game was poor decision after poor decision for TSM, and the fact that they were still in a position to win before one last abominable decision cost them everything illustrates how much SK Gaming was over-rated entering the groups. I can’t help but be reminded of how similar SK seemed to old school CLG that game, lucking into a victory because the enemy team shot themselves in the foot, and they had a hyper-scaling vayne. While they won the group, SHRC cannot be too pleased with their performance. Should they head deeper into the playoffs, the performance of their Mid laner on what was supposed to be his best champion has to be highly concerning. Corn missed a startlingly high number of chum the waters, costing his team multiple winnable team fights. Across the map, Cola’s struggles in the top lane, Insec’s over-aggresion costing SHRC in team fights, and Zero’s frequent poor positioning all paint a troubling picture for a Team about to face their nemesis, EDG.

The following week, SHRC faces off against their fellow countrymen, Edward Gaming, and are looking at an uphill battle against a team that’s had their number all season, while TSM’s match against SSW comes a lot earlier than they would have liked. A TSM victory would stand as one of the greatest upsets in League of Legends history, as SSW has assembled the biggest collection of in their prime talent the League has ever seen. While the performance of both teams in the group stages leaves the outcome of SHRC vs EDG somewhat up in the air.

I’ll have a Preview Article up for Groups C & D tomorrow.