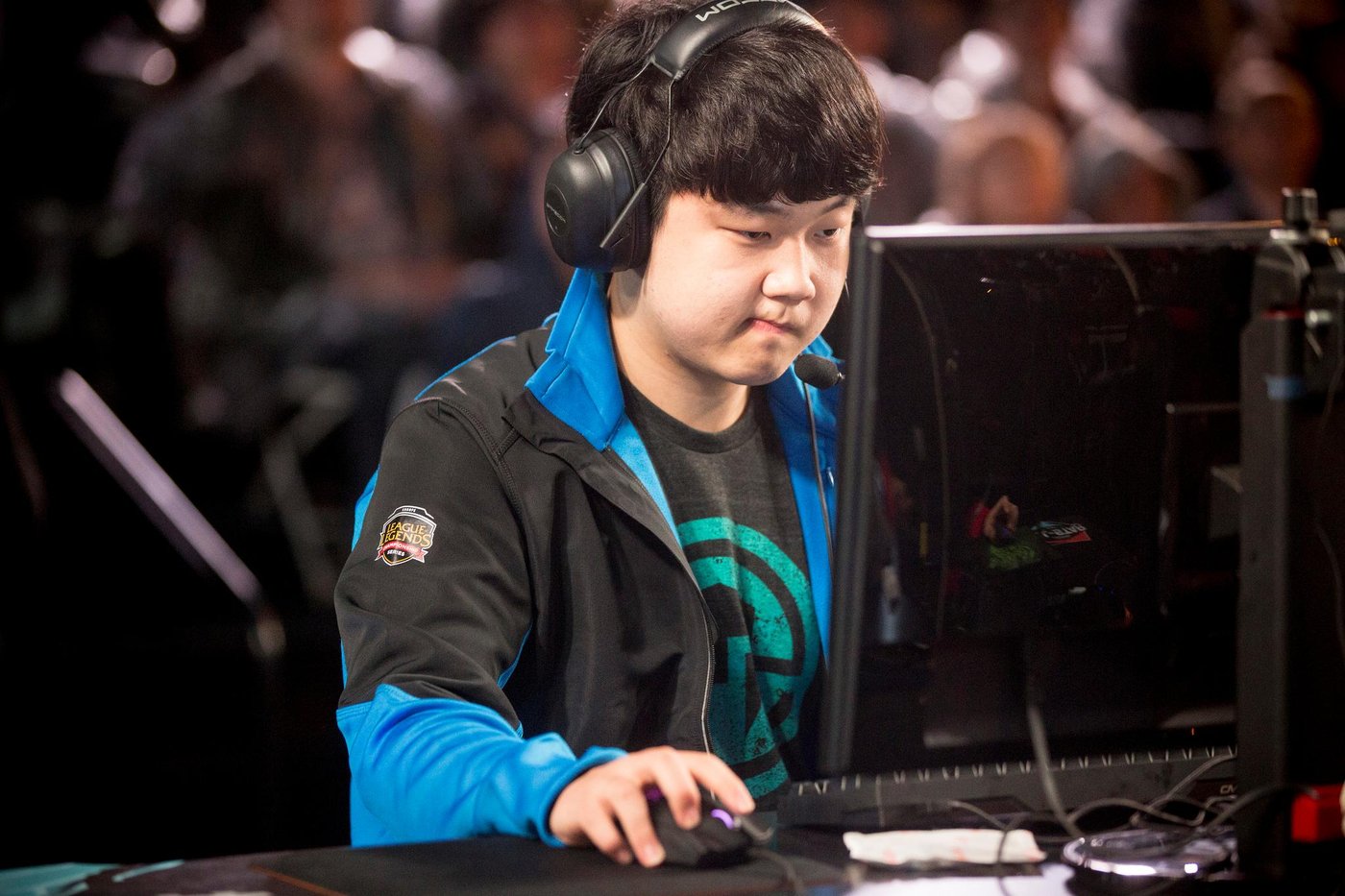 One of the most interesting players in the past 2 years has been the current top laner of Immortals, Huni. Since the Korean import’s career has started, the only LCS player to experience comparable regular season success has been his jungle teammate Reignover. In addition to his unparalleled regular season accomplishments, Huni is also a two-time EU LCS champion and World Championship semi-finalist. But in spite of his prodigious accomplishments, Huni’s personal reputation remains controversial. The daring Korean’s bold style has won him many fans, but there remains a lingering belief among many that Huni, for all his strengths, is also one of his teams’ greatest liabilities.

Throughout his career, Huni has been blessed with playing alongside numerous star caliber teammates, such as Febiven, YellowStar, Reignover, and Adrian. Many fans and analysts have assigned credit for the success of Fnatic and Immortals to these more consistent players rather than Huni, who has often been accused of tilting in the face of more skilled competition or jungle ganks. Their case is buffered by the fact that most of Fnatic’s few losses, as well as Immortal’s lone loss against CLG, came against teams that repeatedly punished Huni for his overaggression.

At the same time, it’s difficult to argue against the brash import’s consistent success. Between his two seasons, Reignover has been the only other common factor in Huni’s success. In addition, both Fnatic in Season 5 and Immortals in Season 6 entered the Spring Split with numerous questions about their players. Even currently well-regarded names like Febiven had negative reputations (in Febiven’s case, for choking and repeatedly failing to enter the LCS through the Challenger series) before they began playing with Huni. It’s wrong to assign Huni credit for the individual success of his teammates, but a closer look at Huni’s career reveals why so many of his teammates play better when he is on their team. Simply put, Huni is a wholly unique player. Terms like “glass cannon Darien” and “superstar baiter” brings to mind a 0-8 Master Yi top lane player trying to justify his terrible performance, but they are the only words available to describe Huni’s bizarre yet effective playstyle. It’s hard to tell whether or not Huni is deliberately bringing these benefits to his teammates, or if these positives are simply a byproduct of his relentless regression. Nonetheless, a holistic look at Huni’s career reveals a player of star-caliber importance who opens up the map for his entire team.

The idea of drawing pressure top lane is not a new one. In fact, it is the role of all top lane players to draw attention away from their teammates and free up the map. However, Huni’s approach is unique in how aggressively pushes the envelope. While most time players back off or try and TP out to force an uneven fight when they draw significant pressure to their side of the map, Huni refuses to settle. Instead, he will frequently try and force 1v2 fights, sometimes even bringing a third or a fourth opponent into his lane before attempting a daring getaway. This playstyle is reminiscent of only a handful of other players. In a way, Huni is the natural evolution of the “baiter” role pioneered by players like Moscow 5’s Darien or ktB’s inSec. While inSec and Darien were both mechanical geniuses in their own way, neither player ever had to consistently carry their team from a playmaking or damage-dealing perspective. On the other hand, Huni has been a top-2 teamfighting damage carry on both Fnatic and Immortals, a status which both complements his ability to draw attention to himself yet makes his aggressive playstyle much riskier.

At least some sort of damage is needed to pull multiple players into the top lane, as simple tanks can generally be ignored as carry threats. Because of this, Darien frequently played champions like Gangplank, Shyvana, and Warwick which could both deal damage and soak up aggression. inSec’s most notable top lane champions, Zac, Shen, and to a lesser extent Lee Sin, still dealt respectable damage while boasting serious advantages in maneuverability. (For this reason, Darien also favored Shen.) Huni’s most notable champions right now, Quinn and Fiora, combine incredible damage with great maneuverability in exchange for meager defenses. (To a somewhat lesser extent, Huni’s favorite picks on early Fnatic such as Hecarim and Lissandra faced the same trade-off.) Due to Huni’s massive damage output and the resources he is carrying, his opponents are extremely motivated to kill him. However, his strength also means that he requires an uncar number of opponents to shut down. This frees up his teammates to an extent that not even legends like Darien and inSec could manage.

Huni’s current Immortals team serves as a perfect example of the benefits of Huni’s playstyle.By consistently drawing attention to the top side of the map, Huni not only frees up ReignOver’s jungle pathing, and on Fnatic, enabled him to select off-meta champions which required more farm like Rengar and Olaf. Immortal’s bot lane is an even bigger beneficiary of how Huni plays. In spite of WildTurtle’s greatly improved teamfight play, he has still struggled in lane this season, particularly against star AD Carries like Doublelift or Sneaky. Part of this problem comes from Turtle’s innate weaknesses in lane, but part of the problem also comes from the champions that Adrian picks. Although champions like Soraka and Janna offer immense teamfight control, there’s a reason that few professional players pick these champions – disengage champions inherently offer less control of the game than engage champions in early game or pick situations. Finally, Huni’s propensity to deal damage while escaping frees up both WildTurtle and Pobelter to wreak havoc on opponents that have already blown their cooldowns trying to kill Immortals’s daring top laner. Many of Immortal’s most effective fights come when the team collapses up to join a fleeing Huni. Once again, it’s important not to assign credit for his teammates’ success to Huni. Huni’s aggressive style would look suspiciously like feeding if his teammates didn’t know how to collapse and/or take objectives around him. However, it’s undeniable how helpful Huni’s playstyle is when it comes to enabling his teammates.

However, fans are right to note that Huni’s greatest strength is also arguably his team’s greatest weakness. In many of Huni’s games, he has taken risks that were either simply unnecessary. In Immortal’s lone loss to CLG, Huni’s repeated desire to force plays led to a fed Darshan Fiora. Although Immortals was able to recover and Huni still helped his team through his aggression that remains an example of a repeated unnecessary risks that did not draw any pressure away from the rest of Immortals, as they were in no position to punish Xmithie’s ganks. Huni also makes mistakes that would be punished by more competent opposition. In Immortals’s first game against C9, Huni picked Quinn into Ball’s Malphite and was solo-killed after he himself started the all-in fight. Although Balls was unable to take advantage of his lane lead, and Huni re-established his lane dominance, that was the exact kind of mistake that caused Huni to struggle against Smeb at last year’s World Championships.

Huni’s teammates need him to play aggressively to free them up, but there are times when Huni needs to be more cognizant of his teammate’s ability to capitalize off of his baiting. As Huni continues to evolve and improve, he will make his teammates look better and better. Unlike a traditional top laner, Huni does not enable his teammates through utility. Rather, he gives them countless uneven fights by pulling much more than his weight to the top side of the map. Huni has romped through 3 LCS splits with hardly any losses. For teams to try and give him any more, they need to understand the unique strengths and weaknesses he brings to his teams.