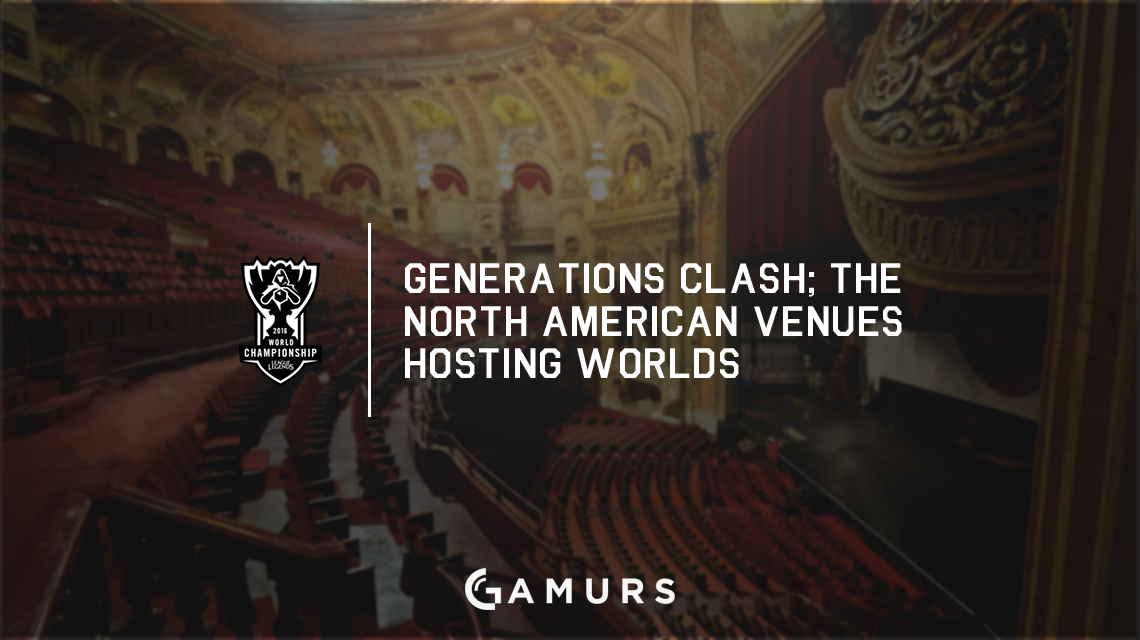 The top League of Legends teams in the world will crisscross the United States of America, visiting some of the finest venues that the nation has to offer, starting with the group stage.

The auditorium opened over 100 years ago in 1915, and since then has hosted some amazing events including the 1920 Democratic National Convention in which Presidential hopeful James M. Cox and his Vice-Presidential selection Franklin D. Roosevelt were selected to represent the Democratic party. To sidetrack for a second, and add some useless but maybe interesting stuff into this piece, Cox and Roosevelt would go on to lose in a landslide general election that saw over 60% of the people vote for Warren G. Harding and Calvin Coolidge for POTUS and VPOTUS respectively. More recently the venue has hosted some landmark moments in the life of tech giant Apple, and founder Steve Jobs, who have held many of their keynote addresses for new iPhones and Macs in the building. Rather surprisingly, though, the Worlds 2016 group stage will not be the first esports event the building has played host to. In 2004, the World Cyber Games were held in the venue. Who could have predicted in 1915 that this building would be used to house the finest League of Legends players in the world? Not many, and that is what makes it even more special.

The tournament then moves eastward to the windy city of Chicago, Illinois for the quarterfinals, where the generation clash continues at the Chicago Theatre. The venue was built in 1921, thus making it slightly newer than the Civic Auditorium in San Francisco. Despite that, there is no lack of history in the building. Its facade is a staple of Chicago history and the building itself is both an official Chicago Landmark (given that honor in January 1983), and on the National Register of Historic Places (added to that list on June 6, 1979). Art history is certainly not my strong suit, but if it is yours, the theatre seems like a place you would know about. The inside architecture boasts high ceilings each with elaborate murals from classic French and Roman times. Also hanging from the ceilings are pristine crystal chandeliers, and on the floor is furniture provided by Marshall Field’s, a department store founded in 1852, six years before the famed Macy’s. None of this really adds up to words like Summoners Rift, and Nexus, so seeing League of Legends in a place like this will certainly be interesting.

The final move eastward brings the teams and players to Madison Square Garden in New York City. MSG is the second newest venue that the Worlds tour stops at with a capacity of over 20,000. This is not the first time MSG will host a League of Legends tournament. Counter Logic Gaming took down Team SoloMid in the 2015 North American LCS Summer Playoffs just over a year ago. The downtown Manhattan venue opened in 1968 and since then the New York Rangers (hockey) and the New York Knicks (basketball) have been permanent residents in the building. Names like Amare Stoudemire and Carmelo Anthony have dominated these halls, but a few new names will now be known here. For most of his career Michael Jordan led his Chicago Bulls into the stadium for round after round of the long rivalry between the Bulls and Knicks. While there are no large glass chandeliers or French murals, the walls of MSG have an endless number of stories inside them, such as Walt Frazier’s Knicks taking down Wilt Chamberlain and the Lakers to win their first NBA championship in the building.

The final stop on the tour brings the final two teams back to the coast they started on in California. The finals of Worlds 2016 will be hosted at the Staples Center in downtown Los Angeles. The newest venue the teams will stop at was opened in 1999 and since then the Lakers, and Clippers (basketball), the Kings (hockey) and the Sparks (women’s basketball) have all called the 950,000 square foot venue home. Legends of basketball like Kobe Bryant and Shaquille O’neal (a League of Legends team owner himself) have both played in the arena. The Lakers ended a long championship drought with a win in the NBA finals over the Indiana Pacers in 2000 inside the Staples Center. Twelve years later the Los Angeles Kings won their first Stanley Cup, and then went on to win their second two years later in 2014, both times the trophy being hoisted in the Staples Center.

All four of these venues have long and rich histories, some of them like the Staples Center will be the spiritual home of yet another championship winning team on Oct. 29. The full schedule for Worlds, including which part of the tournament is being hosted where, can be found below: