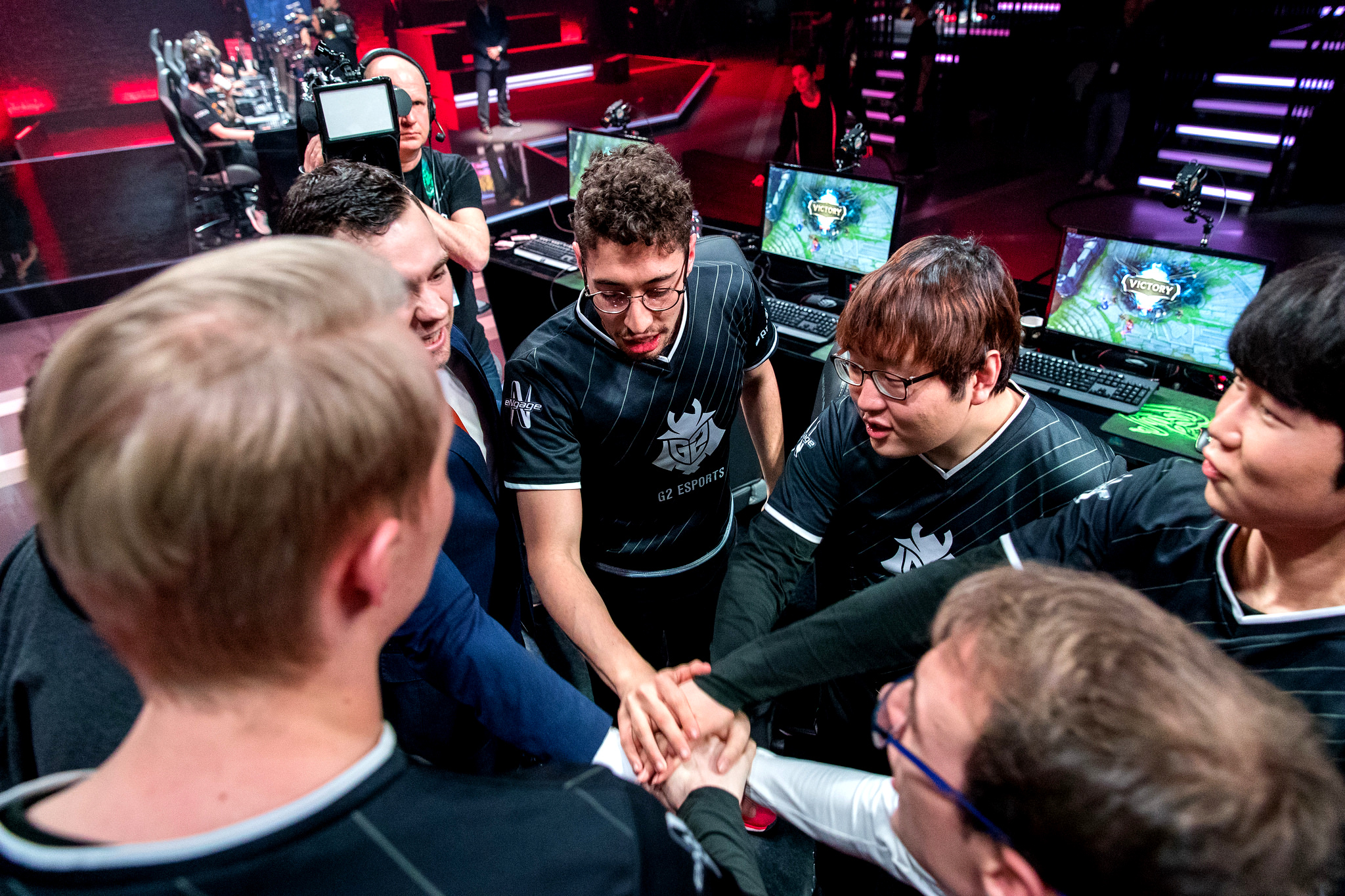 It was business as usual for the Kings of Europe.

As G2 rolled into the Fnatic base for the final time, a hush of inevitability fell over the crowd. Fans had no choice but to accept that G2 was simply in a league above. Then, color caster Martin “Deficio” Lynge said something interesting—he apologized for G2’s boring, macro-oriented play, noting that it wasn’t exciting for the fans.

Excitement means different things to different people. Watching a team slowly rolling towards the enemy base, avoiding traps and engagements, might be boring to some. But for many G2 fans, winning is all the excitement they need. These fans understand the high-level thinking that goes into the G2 game plan and appreciate the players’ execution of those plans.

So what does the famous G2 macro game look like?

The backbone of strong macro

Macro in League typically refers to minion wave manipulation—knowing when to freeze or push a lane, how slow or fast to do so, and how to coordinate those moves around objectives. But the best macro teams have a strategy that starts in the draft phase and focuses on win conditions. Then, they execute those strategies with communication and vision. They chip away at your turrets one auto attack at a time, taking smart risks, until the foundation of your base is in crumbles.

Ironically, Fnatic controlled the macro in their game one victory. G2 pushed heavily in the mid and bot lanes, hoping to control the bot side river and prevent Fnatic from roaming. But Fnatic stayed patient and when G2 did overextend, jungler Mads “BroxaH” Brock-Pedersen and support Jesse “Jesiz” Le sneaked into the G2 jungle to set up plays. From there, Fnatic did a beautiful job getting free objectives by occupying G2 in lanes and catching them when they tried to take shortcuts through the jungle.

Fnatic’s success would continue into game two, where they brought back an old Fnatic strategy: the lane swap. The duo lane of Martin “Rekkles” Larsson and Jesiz started on the top side of the map, grabbing an unexpected early kill on G2 top laner Ki “Expect” Dae-han. It was a dream scenario for Fnatic—not only did they swap Rekkles’ Twitch out of a tough lane against Ezreal and Karma, but they got kill gold on him too.

That’s when G2’s execution stepped up. Unlike some teams, who would panic at Fnatic’s unconventional strategy and tempo control, G2 regrouped and calmly played the map. Less experienced teams may have tried to collapse on Rekkles’ Twitch, seeking to fight their way out of a hole. Instead, G2 adapted to how Fnatic were focusing on Rekkles and chose to build in a different direction. They gave the keys to Expect.

In many ways, Expect is G2’s weakest player, especially during the lane phase. Putting resources on his Camille was a risk, and he made several mistakes that gave Fnatic momentum. But G2 understood that Camille would eventually be unstoppable as a side lane pusher. They also understood that, due to a scaling team composition, they had different win conditions from Fnatic.

Meanwhile, the long side lanes that Fnatic created became a problem. Paul “sOAZ” Boyer couldn’t stop Expect by himself, and Rasmus “Caps” Winther’s Aurelion Sol needed to stick to the mid lane. That made Fnatic’s macro strategy easy to predict. They couldn’t farm all three side lanes effectively, allowing G2 to continue stalling and scaling. All G2 had to do was match the grouped Fnatic members in the mid lane while still farming elsewhere.

The easy takeaway from this play is that Rekkles shouldn’t have been caught. The real problem was that he shouldn’t have been in the top lane at all. Both Expect and sOAZ were farming the long bot lane, but Expect did it much more effectively, aided by G2’s turtling. G2 had control over their red side jungle, preventing a collapse on Expect. And they have crucial control over the top side river, making this play possible. Rekless was forced to farm the long top lane because Rasmus “Caps” Winther was stuck in the mid lane. He was forced to push out because Fnatic needed to grab Baron vision and accelerate the game. And Fnatic needed to press because of G2’s superior champion scaling.

Fnatic was able to get first Baron by killing Expect on another mistake, but were unable to push into the G2 base. With the game stalling out further, Fnatic’s strategy encountered another hurdle: with their entire team relying on Twitch, a short-range ADC, teamfights became extremely hazardous.

All of Fnatic’s nightmares came to fruition at the Baron pit. Because they were getting out-scaled, Fnatic were forced into a Baron call with no lane pressure or control of the top-side river. Expect gave up his life to jump on the duo lane, and once Annie and Twitch were gone, the fight went to G2.

That fight and the subsequent G2 Baron ended the game. It may not be fun for fans to see G2 stall and avoid fighting Rekkles in skirmishes, but it was the winning strategy.

Things would only get better for G2 from there. Luka “Perkz” Perković went huge on Ekko, getting a solo kill on Caps in the mid lane before roaming for kills elsewhere. That also allowed Perkz to eventually transition into a side lane, while Caps’ Syndra was again stuck in the middle. Meanwhile, Expect created problems as well on AD Kenne, another fearsome split pusher.

G2 was able to stack dragons and even Rift Herald by pushing side lanes and creating unanswerable power plays on the pertinent side of the map. They made it impossible for Fnatic to move Rekkles around and had vision of nearly everything. One look at the map shows how boxed-in Fnatic is.

Rekkles is stuck trying to farm top and mid lane, not getting much in either location. Meanwhile, Zven and Perkz are able to farm both because jungler Kim “Trick” Gang-yun and support Alfonso “Mithy” Rodriguez have set up shop in the Fnatic blue side jungle. sOAZ might as well not even be in the game. Having two globals is no use if he doesn’t use either of them, largely because G2 gave him no window to. Expect will push all the way to the nexus if Fnatic don’t do something about him, and they have no vision control.

Why would G2 throw everything on a risky tower dive or Baron fight when they can just do this:

This is exactly how to snowball a lead and play to a win condition. It may seem boring, but it’s also why G2 has dominated European play for over a year, an eternity in esports.

Fnatic went even more off-meta in game four with Kayle in the mid lane. It looked like they wanted to match G2’s scaling potential and take the late game away. G2 had a great scaling option in Gangplank, but needed tempo for their picks of Elise and Ashe.

Instead Fnatic picked up that tempo, getting kills for Caps and Rekkles. But then Fnatic opted into a series of frenetic turret trades when they should have wanted to scale. That resulted in a free rotation by G2 to Baron. Fnatic got there in time for Rekkles to get a double kill, but then gave it all back by overextending in the mid lane not once but twice.

After that chaos, boring G2 came out again. Once again, Caps was stuck in the mid lane. Rekkles wasn’t actually starving for farm or kills, but he wasn’t creating much pressure. G2 still had control of the top side river, which would eventually put Fnatic back in the same box they had lived in for the last two games.

Instead Fnatic went for broke. They tried a reckless engage against a team built to kite backwards. They tried to catch G2 when Zven wasn’t there, but G2 zoned Rekkles out, evening the odds.

Rekkles got off five auto attacks and one Explosive Charge in that fight. That’s not nearly enough, not against a team like G2. He was zoned out by G2’s vision control, neutered by their superior macro.

G2 are not a perfect team. Zven and Mithy have taken a step back this year, and it seems like they rely on Trick more than ever. Against Flash Wolves at IEM, their mid-jungle synergy was tested, as was their vision control.

But when they are playing as a five-member unit, strangling teams out, it is fascinating to watch. It may not be “fun,” but it’s effective, and for real League enthusiasts, a sight to behold.