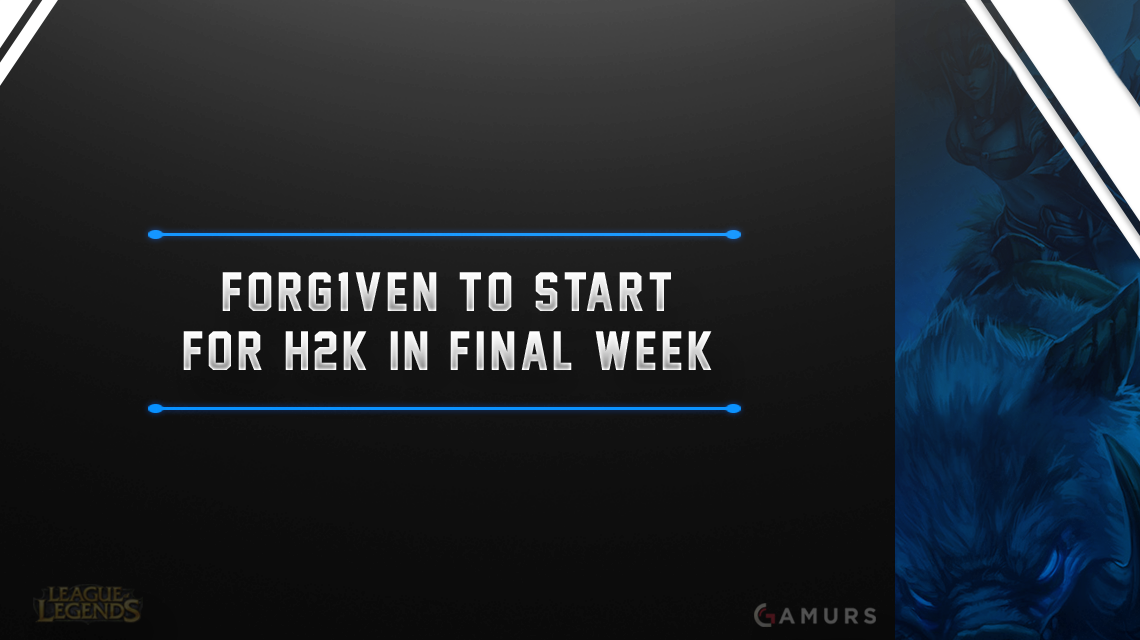 Konstantinos-Napoleon“FORG1VEN” Tzortziou, a well-known European AD Carry,has spent the better part of the past year in and out of theH2k-Gaming starting lineup, and at times, even the organization.Now, H2k fans will get to see the return of their beloved ADC, asit was announced earlier today that FORG1VEN will be starting forH2k in the final week of the European League Championship Series(LCS).

The story really begins whenFORG1VEN was called upon by the Greek military to serve a ninemonth term back home in his native country during week seven of the2016 Summer Split. Shortly after that, FORG1VEN was given atemporary deferment of service by the Greek military. This would bethe last time that he would see time in the H2k starting lineup,until now.

FORG1VEN started off the SpringSplit with another EU LCS team, Origen. However, his first week didnot go as planned as the team lost both of their matches 2-0.Meanwhile, H2k had found a new starting AD Carry in Aleš “Freeze”Kněžínek and it seemed to be working for them with theteam performing decently well in LCS play. Eventually, FORG1VENfound his way back to H2k but Freeze’s success left FORG1VENon the bench until recently, when he was called upon to play in theteam’s final matches of the Spring Split.

Freeze reportedly has beensuffering from injury related issues for some time now, whichprompted H2k to sideline their starting ADC for the final week.Needing to fill that void, the slot opened up for FORG1VEN, who hadbeen patiently waiting on the benches of two separate teams sinceweek one. While there is was no official word on the roster changefrom H2k, many players and even other organizations, were reportingthe rumors that FORG1VEN will be the starting ADC forH2k.

forgivenGRE has returned to the lcs

Oskar “Vander”Bogdan, the H2k support and good friend of FORG1VEN, tweetedearlier today saying “expect the unexpected.” Anothertweet from FC Schalke 04 jungler Berk “Gilius” Demirsaid “forgivenGRE has returned to the LCS.” Perhaps themost substantial evidence came from the official Unicorns of Lovetwitter account, a team that is scheduled to play H2k in the finalweek, as they said “One more day before facing @FORG1VENGRE on stage! Our bot lane isready.”

The official word finally camein through a Facebook post from H2k-Gaming saying that FORG1VENwould officially be starting for Freeze due to his injuries. Youcan read the team’s fullstatement, but here arejust a few words of what the organization had to say.“Freeze’s injuryprevents him from playing and the team did not think he should riskworsening his injury. We all want the best for Freeze and also wantto thank him for his performance during the split. We hope to seehim back on stage in short time.”

Susan Tully, the CEO of H2kadded to the statement by saying” “…we recognize thatForgiven has not been practicing with the team which makes thesituation difficult. But we also know that this starting five hasgreat talent…”

While FORG1VEN has not played onstage in quite some time, his talent is undisputed and he does havepre-existing chemistry with his new teammates on H2k. Only timewill tell how long Freeze’s injury will prevent him fromplaying, but for now, EU LCS fans just get to enjoy the return ofone of the region’s best ADCs.