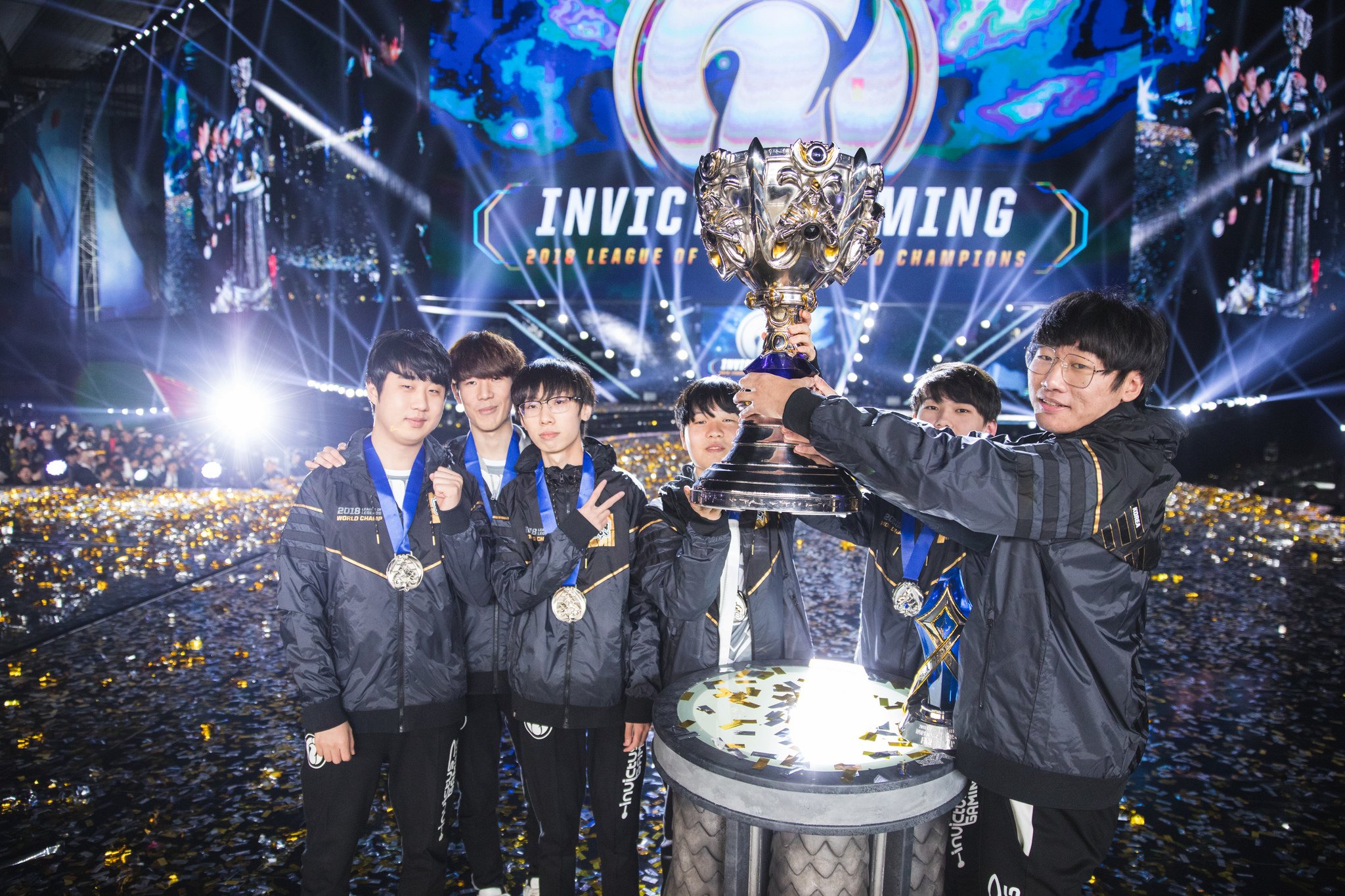 The group stage and quarterfinals of Worlds 2018 were incredible. We got a series of unbelievable upsets and thrilling matches to narrow the field down to four teams. But that’s when things got a little weird. Instead of a continuation of what had been the best Worlds ever, we got a series of stomps. None of the losing teams won a single game, and that included Invictus Gaming’s sweep of Fnatic in the final.

But that doesn’t mean that the series weren’t interesting. Invictus Gaming deserved to win because they were the best team and suited best to the crazy fast Worlds meta. The level of team play may have been lower, but we still saw incredible individual performances from the likes of star mid laner Song “Rookie” Eui-jin. To celebrate Rookie and IG’s crushing victory, we dove deep into the video of the Worlds final to figure out exactly how they won.

These are the five plays that defined the Worlds 2018 final.

There was a lot of criticism of Fnatic’s game one draft. By drafting only AD threats, especially across top, jungle, and mid, they made it incredibly easy for IG to itemize against them. IG top laner Kang “TheShy” Seung-lok and jungler Gao Zhen-Ning bot Ninja tabis and there went Fnatic’s damage.

But Fnatic still had opportunities to win the game, and they badly fumbled them. The reason? Uncharacteristically poor jungle pathing from Mads “Broxah” Brock-Pedersen. Broxah had established himself as one of the best junglers in the tournament over the first few weeks of play. But he was severely out-pathed by Ning in this one.

Both junglers went with the standard red buff start and then invaded the opposing blue side. This made sense for both teams: IG wanted to play around top and mid, while Fnatic needed bot side priority with Jhin. It’s what happened after the initial clear that was the problem. Ning recalled to get on the map faster and continue pressing his top-side advantage. Broxah stuck around and broke the gentleman’s agreement he had to trade sides.

At first, that looked like a nice steal of the Rift Scuttler. That’s good for Fnatic, right? Well, not really. Invictus didn’t expect Broxah to be there is because they expected him to recall. Instead he delayed his back. That delay opened the bot side of Ning’s jungle, area that had previously been controlled by Fnatic.

The way Fnatic’s draft was supposed to work, given their early disadvantages in the solo lanes, was for Broxah to turn bot into a kill lane. That priority would allow the duo lane to rotate mid and help Rasmus “Caps” Winther take down Rookie. It was the same plan that helped Fnatic beat IG 2-1 in the group stage. But after Broxah’s mistake, he never was able to go back to the bottom side of the map.

Unfortunately for Fnatic, their backup plan failed as well.

Fnatic’s early game had gone awry just six minutes into the game. Bot laner Martin “Rekkles” Larsson’s Jhin was basically useless and was about to be outscaled to boot. Things would get worse when Caps started feeding. He just couldn’t lane against Rookie, but that was to be expected.

Fnatic’s only shot at a comeback was to make a gambit at the Rift Herald to break the mid outer turret and set up a split push. But they went too early: they ran at Rift Herald with Lee Sin and Irelia ults on cooldown. Maybe they were feeling the pressure, but not having two key combat utls sounded scary. Then Fnatic support Zdravets “Hylissang” Galabov hit an amazing Braum ult that bifurcated IG and knocked up their star bot laner, Yu “JackeyLove” Wen-bo. But instead of going all-in on the vulnerable ADC, Fnatic pile all their damage onto the Alistar with ult active.

On the other side, the fight was played beautifully by IG. JackeyLove, who has a penchant for game-losing decisions, stayed on the outside until it was safe to ult in. His health bar is hardly touched in the entire affair. And Rookie displayed fantastic discipline: He waited patiently for Caps to dash in before ulting, knowing the he had to hold his key spell in case JackeyLove needed it. IG won the fight and the objective, and the game was over at this point.

Was Fnatic’s game one draft bad? Yes, objectively it was. But their missing execution was the final nail in their coffin.

In the second game, Fnatic solved a lot of their draft issues by grabbing Azir for Caps. Not only did he provide magic damage in the top half of the map, he gave Fnatic the option to scale to late-game teamfights where they should have have had an advantage. All Fnatic needed to do was get their Ezreal and Azir enough items and they should have rolled.

But they never got there. Ning, who very deservingly won Finals for his superior pathing, beat Broxah yet again. This time, he did it on Gragas, who has much less early pressure than Broxah’s Lee Sin. Instead of contesting the Lee early, Ning simply full cleared his jungle, giving up both scuttle crabs and first gank priority to Broxah. Rookie walked out of Broxah’s feeble attempt—because of course he did—and then IG carefully tracked where the Lee Sin went next.

That gave Ning the green light to set up a crucial play. Knowing that Lee was heading to his Krugs, one of the most valuable camps on the map, he made a beeline from his own gromp to the top lane. That’s pretty much the farthest you can go as a jungler. The time was not wasted: Ning and TheShy layered their CC beautifully to pick up First Blood.

It wouldn’t be surprising if this move was planned well in advance of the game starting. IG knew they had to snowball the Irelia to take turrets before Fnatic scaled. And what they did next was just mean: Ning hung around top lane, waited for poor Gabriël “Bwipo” Rau to teleport back, and killed him again.

Fortunately for Fnatic, they were still in the game due to that scaling. Even as IG started steamrolling to their base, taking turret after turret, Fnatic were okay. They could simply accept the incoming minion waves as gifts of gold and experience for their scaling carries while starving IG of resources.

But that all relied on Caps and Rekkles to perform. And that’s where it all fell apart. Because Caps, whose mechanics are normally amazing, looked like he was boosted. He was unable to hit any Azir ults on Rookie, who continued to look like the best player in the world. But then he took it to another level with, well, whatever this is:

We’re not sure what Caps and Hylissang are doing there in the first place. They literally have no idea where IG are. And even though LPL tgeams have a penchant for getting themselves picked in the late game, with two inhibitors down and no objectives up, there was no earthly reason why IG wouldn’t be grouped together.

And that’s before all the mechanical errors. Their reaction to Ning’s control ward is painfully slow. Caps doesn’t even have a soldier up. Then, after seeing the full squad running at him, he turns around to send a single solder at them instead of using that soldier to escape. He never uses Azir wall. He held flash until after JackeyLove dashed in and the basic attack is in the air. You can’t flash those, Caps.

The worst part? Azir was the one member of that Fnatic absolutely couldn’t lose. They needed him to wave clear and win a desperation fight. With no objectives up, what was Caps thinking? He’s simply too good of a player to make that type of mistake

The good news is that Fnatic regrouped in game three. Despite somehow counterpicking their own solo lanes, Fnatic got First Blood on a nice level one play and had real tempo for the first time all series. It was Caps this time who walked out of a multi-man gank with some sweet moves and for the first time all series, Fnatic got back to their steady focus on the bot lane.

But IG just reacted to that better. They had better bot side control with the combination of Camille and Galio. Caps survived his lane but had no presence. IG’s bot side river vision and frequent roams gave JackeyLove freedom to play aggressively. He picked up a kill when IG rotated four-people to solve an early Fnatic gank and got a second when Ning came by again. It got to a point where he had a fully-completed Stormrazor while Rekkles was sitting on a pile of useless parts. Needless to say, that did not go well for Fnatic:

This time, Ning was even needed. A three-kill Kai’Sa is a marvel to behold. We weren’t kidding when we called JackeyLove one of the few good Kai’Sa players in the entire tournament. This is just how powerful he was:

Oh and remember that clip from a few years back when Yiliang “Doublelift” Peng tried to dash onto Lee “Crown” Min-ho’s Viktor and got blown up? Well apparently, if you’re as fed as JackeyLove was in game three, you can get away with that:

We hate to keep saying this about those games, but it was basically over after that. Five kills on Kai’Sa is just too much to overcome. JackeyLove finished with an incredible 13/0/7 scoreline to prove that he really can carry on the world’s biggest stage.

Invictus Gaming vs. Fnatic wasn’t the best series we’ve seen this year. There were too many errors on both sides. But that shouldn’t cheapen what it was: an incredible display of skill from both sides, with IG’s stars shining brighter. Fnatic had themselves an amazing tournament: They absolutely dominated getting to the final. But it’s just hard to beat a team like IG that many times in a row, especially after they found some confidence from winning in the quarters and semis.

The biggest takeway from Worlds 2018 though wasn’t one of the plays listed above. Sure they were important and turned the series. But taken together, they tell a story of how IG evolved in the middle of the biggest tournament of their lives. When IG finally believed in themselves and played their style confidently, nobody could take them down. You could see that from the way they drafted to the way they moved on the map as a team. And that’s the lesson we hope teams all over learn: mechanics and macro play can only take you so far. And some point, you have to create plays like these ones out of sheer belief.