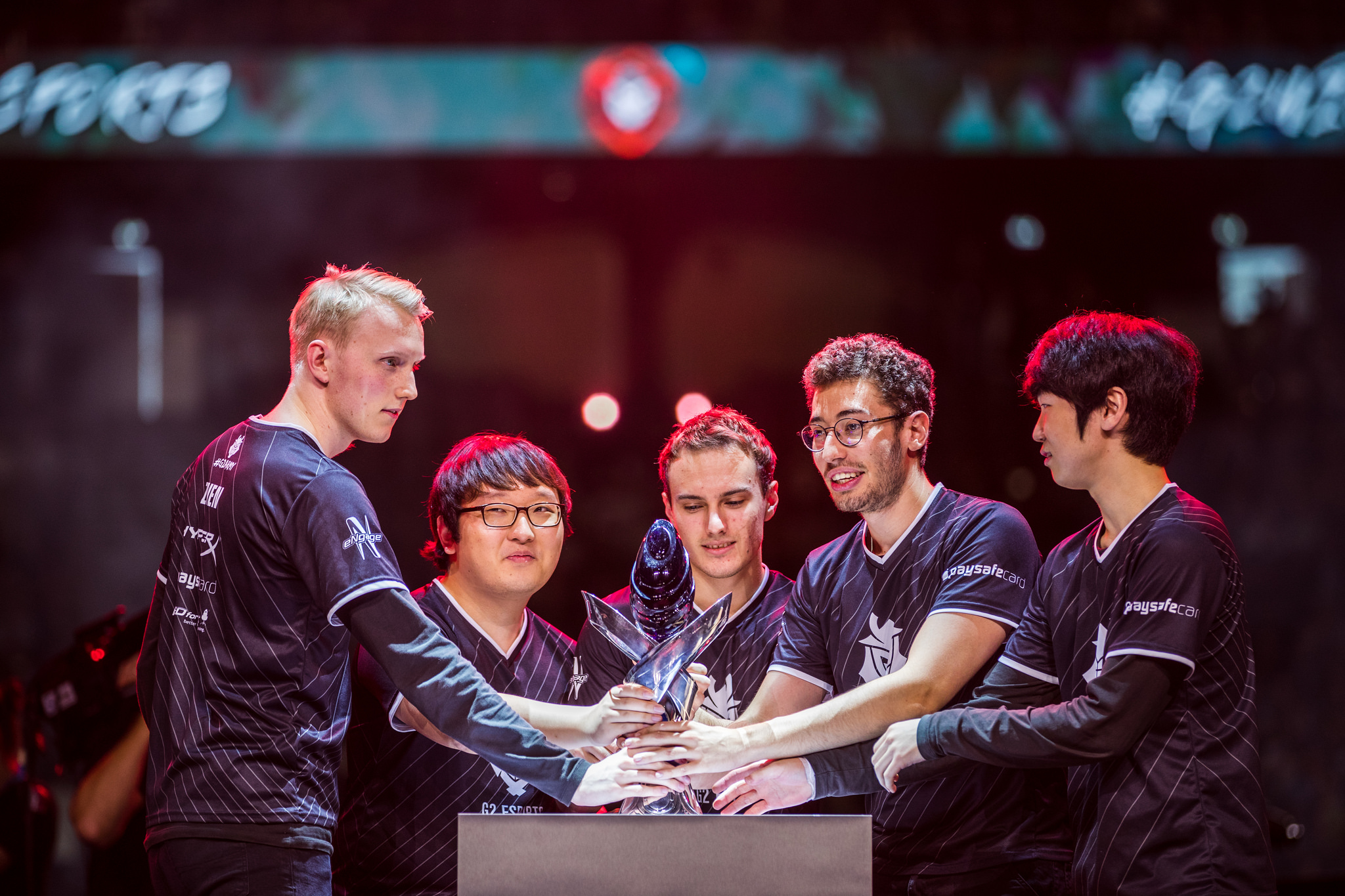 On paper, the European teams at the League of Legends World Championship don’t have much hope of making it out of the group stage.

None of the three seeds from the EU LCS have been given a particularly easy group and all face a daunting task ahead if they want to make it into the knockout stage.

Realistically, all of the EU teams are on the back foot, with some teams like Fnatic worse off than others because of their opponents. Longzhu Gaming, Samsung Galaxy, and TSM stand in Europe’s path to glory—so can they succeed?

The EU LCS’s number one seed, G2, have not been given a favorable group with Samsung Galaxy of the LCK and Royal Never Give Up of the LPL waiting for them.

Last year was a rough one for G2. In 2016, they failed to make it through the group stage at both Worlds and MSI, despite being EU’s best team. This year, though, they fought hard for a second place finish at 2017’s MSI, which means they’re entering Worlds on the back of international success for the first time in a long time. Unfortunately for G2, though, that might not be enough. Two of the teams in their group, Samsung Galaxy and Royal Never Give Up, are among the best teams in the world.

G2’s primary strength is their late-game teamfighting ability. There isn’t another team in the EU LCS that can prepare a teamfight and then execute it so perfectly. Unfortunately, their early game isn’t nearly as potent, so they play overtly passive in the early stages of the game, waiting for mid laner Luka “PerkZ” Perković to roam around to set up snowballs in the other lanes.

This works in the EU LCS, because the teams there don’t know how to both punish during the early game consistently while at the same time setting up a proactive late-game strategy. Those that do, like Unicorns of Love and Fnatic, only seem to do it on random occasions when their off-the-wall team comps and oddly aggressive dives work out, but they can’t replicate it every game. Here at Worlds, however, finding a team that can punish the early game while maintaining poise in the late game is not a rare feat. Both RNG and Samsung Galaxy pull this off extremely well. At MSI this year, G2 was able to develop newfound strength in the early game and transition it properly. During the split that followed, however, they seemed to forget how they’d done it.

If they want to beat the best teams of their group, they need to rediscover that talent.

Misfits may be Europe’s second seed, but they’re probably the worst team from the region in attendance at Worlds. They upset Fnatic in the semifinals of the EU LCS summer playoffs, but it was just that—an upset. FNC played better in the majority of the split, and then they went on to smash the play-in stage, proving that despite a tragic end to their playoffs, they’re still a dominant team. Misfits, however, are more of a wild card. When they win, they absolutely crush the opposition. But when they lose, they get buried.

For example, if they draft an Orianna, Twitch, and Lulu, their win condition is making it to the late game, shielding Twitch, and winning huge, momentous fights around mid lane to siege through objectives. While the team plays mostly safe, mid laner Tristan “PowerOfEvil” Schrage is roaming in unison with the jungler to find an early lead for Twitch, solidifying his spot in the late game. If they run LeBlanc, Gragas, and Ashe, however, they’re weaker in those big sieging teamfights, but they’re excellent at making big picks to open up opportunities to take Baron, Dragons, and splitpush. By identifying these win conditions as early as possible, Misfits proactively set them up for success.

Unfortunately, if they fail to identify the win condition early on, they lose focus and look uncoordinated, and unlike other teams, they have problems identifying, adapting, and focusing on it later on in the game. They’re not great at coming back from behind.

The second cause of their high risk/high reward style is their mid laner, PowerOfEvil. He’s by far the best player on the team. And that’s a problem, because unlike teams like TSM or SK Telecom T1, they don’t have a competent roster to back up their superstar. PowerOfEvil’s talents vastly outshine his teammates, which means only one thing. If he doesn’t find a lead in his lane, the team struggles to find any sort of lead anywhere else. Every win revolves around PowerOfEvil stomping, and the team rallying behind him. If there’s no PowerOfEvil, Misfits has nothing to rally behind.

Worlds has some of the best talent in the world in attendance, especially in Misfits’ group. They’ll be facing TSM’s Søren “Bjergsen” Bjerg and SSG’s Lee “Crown” Minhom two mid laners that won’t just test PowerOfEvil’s strength, they might overshadow him.

Fnatic won’t have it easy

Fnatic had a shoddy season. That’s not saying much, as most of the EU LCS had a shoddy season, but Fnatic’s was a roller coaster. One week, they’d look more dominant than usual, but the next week would be filled with Fnatic falling on their faces. This problem seemed to highlight itself within Rasmus “Caps” Winther, the team’s mid laner, who struggled with consistency as the season progressed. More than other laners on the team, Caps often flip flopped between playing really well and looking like an amateur, which was most likely due to his inexperience as an LCS player. This was his first year in the LCS, and consistency in mechanical and macro talent is something that takes time to develop—time that Caps hasn’t had yet.

At the end of the season, the situation seemed to improve. FNC was looking stronger than they had all year, and it looked like it would stick around for the long haul this time. Going into the EU LCS playoffs, they were favored to at least make it to finals, but they were upset by Misfits in the semifinals. This was only a temporary setback, though, because as soon as they entered the regional playoffs to fight for the final slot at Worlds, they curbstomped every team they came across.

That dominance carried over into the play-in stage at Worlds last week. They had a rough first day, handing over a loss to Young Generation, one of the worst teams in their group, but by the time the second day arrived, they were back on track, steamrolling the final two games they played. When the knockout stage arrived, they cleanly swept Hong Kong Attitude under the rug in three games, a team that had defeated some of the LMS’ best teams this past split, including ahq e-Sports Club and the Flash Wolves.

This is good news for FNC, because they’re on one hell of an upward swing going into the group stage. There are two major threats in their group—Longzhu Gaming and the GIGABYTE Marines. Longzhu are the guys that overthrew SKT for the title of LCK split champions this summer, and they undoubtedly have one of the best rosters at Worlds this year. The Marines, on the other hand, are more of a wildcard.

They play with extreme unpredictability, but unlike the EU LCS’ Unicorns of Love, it almost always works for them. They practice weird comps and odd strategies, and even though these seemingly non-meta strats catch opponents off guard, it’s just how GAM operates, and it’s become their staple as a team. If FNC wants to make it out of Groups, GAM is the team to beat. We’re not saying they can’t beat Longzhu, but it’s extremely unlikely.

They’ll have a leg up on GAM if they can learn to adapt quickly to new and exciting tactics, or maybe even develop some of their own.

G2 will take on Samsung Galaxy for Europe’s first game in the group stage on Thursday at approximately 4:30am ET/4:30pm CT.

Aaron Mickunas contributed to this story.