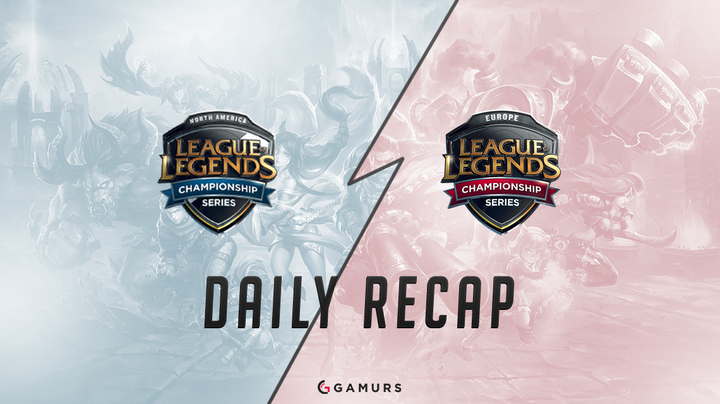 Game two was a blowout in G2’s favor. G2’s mid laner Luka “Perkz” Perkovic, going 10/1/3 on Vladmir, was able to single-handedly outslay Splyce as a team. The team kills went 23-8 in favor of G2

G2 looked as solid as ever. At this pace, G2 can easily win the Summer Split. Splyce looked good in Game one, but not so much in Game two. If Splyce can play how they did in Game one, then there could be a better place in the standings for Splyce.

Game one saw Vitality take an early lead, which they rode all the way until ROCCAT took a Baron. Despite the Baron and the eventual win, ROCCAT was down in gold the entire game. ROCCAT did win the team kills 22-14, and was led by strong bot lane performances by ADC Pierre “Steelback” Medjaldi – 11/3/6 as Caitlyn – and support Ji-hwan “Raise” Oh – 1/2/20 as Janna.

Game two was a closer bout, but ROCCAT eventually edged it out. The team kill spread went in favor of ROCCAT 10-6. Again, ROCCAT’s bot lane shined with Steelback going 7/3/3 as Caitlyn (four of those kills being a quadra-kill) and Raise going 0/1/10 as Janna.

Wins continue to avoid Vitality. If Vitality continues to tie/lose, then they can say goodbye to a high seed. ROCCAT is playing better than almost everyone expected. If they continue to play with tenacity around their bot lane, expect to see ROCCAT in the playoffs.

Game one saw H2k outsmart and simply outplay Fnatic. The team kills went in favor of H2k 11-1. Every member of H2k contributed to the win. For the match, there is not much more to say other than H2k looked fantastic, and Fnatic did not.

Game two was a much more competitive bout, but H2k eventually took the win. Winning the team kills 18-10, H2K’s bot lane led the charge; ADC Ales “Freeze” Knezinek went 8/1/3 as Draven and support Oskar “Vander” Bogdan went 0/0/13 as Karma. Fnatic put up a fight, but H2k was simply too much to beat in this match.

H2k looks like they are getting some form. In order to beat G2, H2k will have to become better at controlling objectives. Fnatic needs consistency if they want to reclaim their EU LCS crown.

Game two saw Giants sail an early lead to victory. Winning the team kills 19-8, Giants was led by their bot lane duo of ADC Son “SONSTAR” Seung-ik – 10/1/7 as Ezreal – and support Morgan “Hustlin” Granberg – 1/1/14 as Karma. Despite this game lasting nearly 35 minutes, UOL never really had a chance at taking down Giants.

Giants looks good when paired against UOL. Giants could ride this momentum and potentially win/tie more games, but they will not have it this easy for a long time. UOL looks dismal and confused. Despite having talented individual players, team chemistry is lackluster at best. At this rate, UOL will not win more than one game.

Game one was an easy win for S04. Winning the team kills 15-2, S04 saw the entire team contribute to the victory. Overall, S04 looked to quickly dispatch Origen, who looked battered and beat.

Game two saw Origen strike back at S04. However, the win was not an easy one for Origen, who won the team kills 13-10. Led by jungler Maurice “Amazing” Stückenschneider – 2/0/9 as Rek’Sai – Origen grabbed two Barons. This gave Origen the momentum to take down S04, ending the series with a tie.

S04 looks better than most expected coming into the season, but they have to become more flexible and have better objective control in order to climb the standings. Origen looks good, considering the Konstantinos “FORG1VEN” Tzortziou situation. If Origen can find a foundation to play around, they can begin to win some games, and hopefully make playoffs.

Game one saw NRG taking the victory. Winning the team kills 29-13, NRG was led by jungler Lucas “Santorin” Tao Kilmer Larsen, who put up a 2/0/23 scoreline as Rek’Sai and had an insane 85% kill participation. The game was back-and-forth initially, but NRG took two Barons and was able to push to victory.

Game two saw Immortals even out the series. Winning the team kills 18-9, Immortals was led by mid laner Eugene “Pobelter” Park, who went 6/0/8 as Twisted Fate. The game was close until around 19 minutes, when a teamfight emerged and ended in favor of Immortals, who then rode that momentum to victory.

Game three saw Immortals close out the series against NRG in a close match. Winning the team kills 17-12, Immortals was led by top laner Seong “Huni” Hoon Heo, who went 9/3/6 as Irelia. The game was closely contested until Immortals snagged a Baron around 26 minutes in and finished the game.

Immortals is not decimating opponents like they did last season, but that constant decimation became their downfall when having to play from behind. Immortals is in a good spot at the moment, playing well from behind and with small leads and can continue to be in the top three NA teams with this type of play. NRG looked much different than they did last week, for the better. If they can gel together, this team can dominate even against the other top teams in the NA LCS. Whether they can win a series remains to be seen.

EnVyUs looks strong despite having gone to game three against Apex. Apex continues to prove that they are a tough competitor. If they can continue this play, they can easily make playoffs.