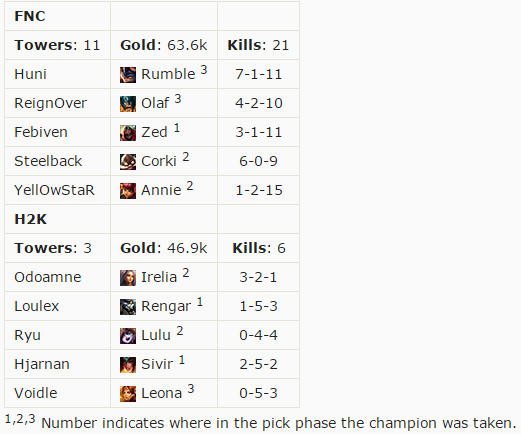 Hai! My name is Jesper ”Benvarmeren” Kuntz. I’m an ADC main and an aspiring, amateur shoutcaster and analyst. In this post I’ll be doing a pre-game analysis of the EU LCS Spring Split Playoffs matchup between Fnatic and H2K. I’ll be talking about each team, history between teams etc., lane advantages, bans and contested picks and finally my own expectation of the series. In the bans and contested picks sections I’ll be giving my insight into which champions could be ban worthy and why. There’s gonna be a TL;DR in the bottom of the page.

Fnatic is one of the biggest organizations in eSports, and they’ve build a whole new team in the 2015 EU LCS Spring Split. After four members leaving Fnatic in the 2015 pre-season, the only member left was YellOwStaR. Fnatic then recruited two Koreans, Reignover & Huni, former mid laner for H2K, Febiven, and YellOwStaR’s fellow countryman for the ADC role, Steelback.

As a team, Fnatic has a really aggressive, yet calculated, playstyle. Fnatic snowballs their lead after getting some kills and ensures a victory. They like to have a carry top laner and a duelist in the jungle. In the mid lane, they like to have an assassin or a safe poke mid laner. In the bot lane, they love to have a support with a lot of engage and CC, whilst having a marksman that can safely deal damage in the teamfight. These are the members of Fnatic’s most played champions:

H2K-Gaming is smaller as an organization than Fnatic. The 2015 EU LCS Spring Split is their first split as a team in the LCS. H2K has to beat GIANTS! Gaming before making it into LCS, which they ended up doing. After winning a spot in the EU LCS H2K’s midlaner, Febiven, leaves to join Fnatic as Fnatic’s new mid laner.

H2K has a playstyle, where they love to get out of the laning phase and secure objectives with vision control. They’d then snowball kills and objectives – and get away with it since their opponent has no wards. H2K’s most picked champions are:

Fnatic and H2K have played against each other two times – in week 1 and in week 9. Fnatic has won both encounters.

Fnatic also won the second game of the split against H2K. This time Fnatic grabbed the vicotyr in 31 minutes and 15 seconds. They had a lesser gold lead in their second victory having 5.5k gold less than in their first victory. The tower score was 9 – 4 in favor of Fnatic and the dragon score was 3 – 1 also in favor of Fnatic. In this game H2K banned Rumble, Lissandra and Zed and Fnatic banned Maokai, Morgana and Lulu.

Odoamne has had 40 kills, 41 deaths and 135 assists in the regular split, while Huni has 71 kills, 65 deaths and 185 assists. This respectively gives them a KDA of 4.27 and 3.94 Huni and Odoamne has a very similar KDA, but Huni also has 31 kills and 50 assists more than Odoamne. Huni has a gold income of 356.92 gold per minute (GPM), while Odoamne only has 337.36 GPM. Their gold per minute is very close to being alike, same as their total gold. Huni’s total gold and Odoamne’s total gold are respectively 239k and 224k.
Odoamne likes to play the tanky top laners and Huni would rather play a top lane carry like Hecarim or Rumble. Looking at the stats, Huni has way more assists, kills and a higher gold income and total per game. But Huni has also died more than Odoamne, which means that he is more likely to go “ham” and end up giving kills.
Advantage: Too close to call

Loulex has a better KDA than Reignover. Loulex has 40 kills, 46 deaths and 139 assists, while Reignover has 64 kills, 70 deaths and 156 assists in the regular split. This gives them respectively a KDA of 3.89 and 3.14. Reignover wins with more GPM and total gold, though he lost at the “KDA” standing. Reignover gets 332.6 GPM and 223k total gold, while Loulex gets 204k total gold and 307.56 GPM.
Loulex performs best when he gets a jungler with crowd control, while Reignover prefers junglers that are good duelists. Both junglers have played both tanky, crowd control junglers and duelists.
Reignover has more kills and assists than Loulex, but he also has more deaths. The differential between the total gold earned could indicate that Reignover is present when Fnatic is pushing the towers.
Advantage: Reignover

Despite Ryu being regarded as one of the best Orianna, Ahri and Zed players in Korea aswell as coming from the roster than won IEM Katowice 2014, Ryu doesn’t lead the regular split with the highest KDA overall. Febiven has a KDA of 7.83 and Ryu has a KDA of 4. In the regular spring split, Ryu had 74 kills, 40 deaths and 86 assists while his opponent, Febiven, had 97 kills, 29 deaths and 130 assists. Febiven also leads with most gold per minute. Febiven has 398.41 GPM, whilst Ryu has 369.58 GPM.  Total gold is also a win for Febiven, where he has 267k and Ryu has 245k.
Where Febiven loves to play assassins and pokers, Ryu likes to play “regular” mages.
Febiven leads in most of the stats and therefore I have to give this to Febiven.
Advantage: Febiven

Starting with the KDA, Steelback has the second best KDA, consisting of 8.85, in the regular split, while Hjärnan has the fourth best, consisting of 5.9. 78 kills, 30 deaths and 99 assists for Hjärnan and 95 kills, 27 deaths and 144 assists for Steelback.
Their GPM and total gold are very similar – Steelback having 409.3 GPM and 275k and Hjärnan has 407.75 GPM and 271k.
Both Hjärnan and Steelback have a champion pool that looks very alike – Sivir, Corki and Graves.
Steelback likes to play janitor and clean-up fights, surviving them with his good positioning. Hjärnan likes to go a bit more aggressive in lane and win them – Sometimes it works, sometimes it doesn’t.
Advantage: Too close to call

YellOwStaR leads the regular EU LCS Spring Split in all three categories. YellOwStaR has a KDA of 6.28, GPM consisting of 264.63 and 178k total gold. His opponent, KaSing has 108k total gold, 250.83 GPM and a KDA of 5.16.
Both YellOwStaR and KaSing both share some of their most played supports – Thresh, Annie and Janna. YellOwStaR brought out the Nautilus support pick after Nautilus had seen some play time in the NA LCS Spring Split as a support.
YellOwStaR and KaSing both likes to roam to the mid lane and help create picks – This could result in them both being at the wrong spot, at the wrong time.
Advantage: YellOwStaR

I heavily expect a Rumble ban from H2K. Most teams have been banning Huni’s Rumble and last time H2K and Fnatic met Huni went 7/1/11 on Rumble.

Maokai and Gnar has been looking really strong for Odoamne. I think that these might be ban worthy.

Hecarim might also be ban worthy. Huni has showed a lot of carry potential with his Hecarim pickup and I fear that if H2K can’t play their style, where they get superior vision control, they’ll find themselves getting flanked and cornered by a Teleport-Homeguards Hecarim.

Ryu and H2K will have to decide whether to lock in LeBlanc or Zed or banning them. Else Febiven will pick them up and it’s his two most played champions. Ryu can play both LeBlanc and Zed. They might also ban LeBlanc and leave Zed open. This may lure Febiven into picking Zed. This is a trick that has been used in the NA LCS. You’ll leave Zed open and then pick Vladimir or Urgot to counter the Zed pick.

Sejuani’s gonna be a pick or ban for both teams. She is arguably the strongest jungler in this current meta because of the new jungler enchantment, Cinderhulk, which makes her very tanky. She also brings a lot of crowd control to the team.

We might see YellOwStaR bring out a new nontraditional support pick – Kennen. Kennen has been seeing some play in the LPL scene. Kennen usually buddies up with Kalista. Kalista then uses her ultimate, Fate’s Call, so Kennen can get into the enemy team.

If we only looked at the past matchups, then Fnatic would win. But in a game like League of Legends where there is shifting strategies and metas, which right now favors tank junglers and peculiarity solo laners – Cho’Gath, Urgot and even Malzahar. Anything could happen and both teams have had a lot of time to practice new things.

If we look at the statistics then Fnatic would win. Fnatic has the advantage in three out of five lanes. Fnatic’s advantages lies in Febiven, Reignover and YellOwStaR. There is no advantage to be found at the top lane and marksman position.

Fnatic has looked really strong in the regular spring split, coming of a season where they ended up looking, in my opinion, as one of the strongest, if not the strongest, team in Europe.  Fnatic will have to play aggressive as usual. Though, this is a new team and I’m looking forward to see how it’ll go for this new team in a bo5.

H2K has also looked really strong in the regular split and looked like a clear top four team in Europe. They’ll have to survive the early game, where I think that Fnatic will have the advantage, and then try to secure objectives and kills with their vision control, which they have a talent for.

Thanks for reading my analysis. If you’ve got a take on my analysis then feel free to leave a comment, so we can get a discussion going.