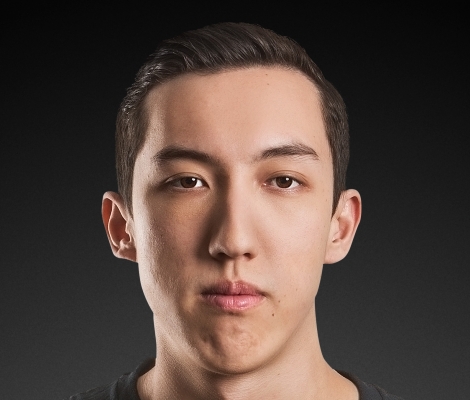 Cop, AD Carry for Gravity, is a long-term veteran of competitive League of Legends, and one of the North American scene’s mainstays along with high profile names like Dyrus, DoubleLift, and Xpecial. But through his time with Dignitas and Curse, Cop never enjoyed the same level of celebrity and respect as those players, instead garnering a reputation as a consistent, but unexciting, mid-level performer.

A common concept when describing Cop is that he is the measuring stick for NA LCS AD Carries: if you’re better than Cop, you’re good; if you’re worse than Cop, you’re bad. That perception has stuck with Cop for years, to the point that no matter what he does, he is seemingly never seen as better than average, never more than “just consistent”. The phrase implies that Cop can’t put his team on his back and carry them to victory, that he isn’t capable of exceptional performances.

In a recent profile video produced by Riot, Cop even describes himself using the “just consistent” label.

The 2015 season brought about a new opportunity for Cop. He was playing for a new team, Gravity, and was joined by Bunny FuFuu, one of the several Supports he had worked with in 2014.

Even though it may not seem obvious on the surface from Cop’s overall statistics, this new opportunity has been just what Cop needed to break away from his “just consistent” label and prove himself as one of the top AD Carries in North America.

Need proof? Let’s dig into some statistics from the 2015 Spring regular season.

At face value, Cop’s performance in the 2015 Spring Split seems to be fairly consistent with his past results. On a team level, Gravity finished with the 5th seed, compiling a 10-8 record, essentially on par with the old “Forever Fourth” curse from his previous team. Individually, Cop’s stats suggest that like his team, he performed well but not dominantly. For example, his KDA of 5.8 matches his 2014 KDAs of 5.7 in 2014 Spring and 5.8 in 2014 Summer.

Let’s continue this thought with a look at Cop’s rankings in a handful of different statistical categories. (To see actual values for a variety of player statistics, check out the Player Stats page on Oracle’s Elixir.)

Cop fought well this split, but not exceptionally: among AD Carries with at least 10 games played, he was 3rd in KDA and average kill participation, while ranking 2nd in kills per game and 3rd in kills per minute (see below).

On the other side of the coin, Cop was 4th best for deaths per game, as well. (See below.)

Cop’s laning phase this split was pretty much a perfect mid-point: he ranked 6th in average gold differential at 10 minutes, going almost perfectly even with opposing AD Carries over that time span, with an average gold differential at 10 minutes of -20 gold. Cop had gold leads at 10 minutes in seven games, was even with his opponent in four games, and was behind by at least 50 gold in seven games. You can’t find a better representation of a mid-point than that!

Cop’s 10-minute gold earnings were hindered somewhat by his team’s propensity to give up the first tower, which they did 56% of the time (ranked only 7th among the 10 teams). In games where they took the first tower themselves, it came at an average of 12.3 minutes into the game (6th fastest as a team), too late to help out his laning stats.

Cop farmed hard in 2015 Spring, like he always has: he had the 3rd-highest average CS per minute among AD Carries, and the 4th-highest average earned GPM. (Note: average earned GPM excludes starting gold and the inherent 1.9 GPM every player receives, and averages GPM across games rather than adding them all up. Numbers/ranks may not match lolesports GPMs because of this.)

In short, a cursory review of Cop’s summary stats probably places him somewhere between the first and second tier of NA ADCs, depending on how much you value combat stats versus farming versus laning strength, for example.

But overall stats don’t necessarily tell the complete story. They don’t reveal, for example, how capable Cop is of breaking games open and carrying his team, or how important he is individually to his team’s overall success from game to game.

When Cop’s stats are broken out by wins and losses, some very interesting patterns emerge. Most notably, and very uniquely, Cop’s share of the team’s damage to champions is 4% higher in Gravity’s wins, and his 33% average damage share in wins is the highest of any NA AD Carry except Keith. Check out the numbers below.

Contrast Cop’s importance as a carry in Gravity’s wins with CoreJJ, DoubleLift, Maplestreet, and Sneaky: all of these players have significantly lower share of damage to champions in their teams’ wins than in their losses! This suggests that, for example, CLG, Team 8, and Cloud9 are more effective when the carry burden is placed more heavily on other players, or at least is more evenly distributed. In CLG’s case, DoubleLift’s carry role is placed more onto Link’s shoulders, with Link’s damage share skyrocketing from 27% in losses to 35% in wins. On Team 8, the damage is more evenly distributed in wins, with increases for Calitrlolz, Porpoise, and Slooshi. For Cloud9, more damage share in wins goes to Meteos, with slight increases for Hai and LemonNation.

Overall, the damage share and average kill participation stats suggest that Gravity is more successful when Cop has a larger offensive role.

Examples of Cop’s Ability to Carry

During the past split Cop has showed off his ability to put Gravity on his back, especially when his team is setting him up for success with pick-offs and good peeling. Let’s look at a couple of examples.

In Gravity’s second game of the split they earned their first win, taking down Cloud9. Cop played Corki and dealt 39% of his team’s damage to champions, en route to an impressive 5/0/11 KDA. Note that Cop pulled off this huge damage share with a Kassadin in the top lane; the composition wasn’t designed to make Cop the main damage threat.

Some key points to watch in this game for Cop are his forward positioning in the team fight at 25:30, his aggressive Valkyrie forward to force Meteos to Flash around 30:45, setting up a Baron a minute later, and the game-deciding fight at 39:00, where Cop’s AoE damage, following up on yet another deep dive by Keane’s Zed, led to a Cop double kill. Cop was able to position himself aggressively and deal out so much damage because of Keane and Hauntzer diving into the enemy back line, so credit has to go to his teammates for enabling him. Bunny FuFuu was also a huge part of the team’s success in this game, racking up some early-game kills on Morgana en route to a 4/1/13 of his own.

In Gravity’s week 5 game versus Team 8, Cop topped himself by supplying 44% of the team’s damage to champions, with a 13/2/5 performance on Sivir which included 90% kill participation.

Watch Cop clean up for a double kill in the fight that happens at 28:00. At 36:30, Gravity baits at Baron, and a fight breaks out shortly after, where Cop picks his timing to charge forward for another double. At 43:00, Cop is once again leading the chase, following up his team’s crowd control with huge damage output. Finally, Cop explodes at 48:00, smartly positioning himself just out of range of Team 8’s damage dealers and pumping out a quadra kill like it’s no big deal, leading to the Nexus kill. Again, in this game, Bunny FuFuu was alongside on Morgana, setting up kills with a 1/2/16 and 85% kill participation, and Keane and Hauntzer provided the chaos in the enemy back lines.

In both of these games, and in other examples throughout the split (check out Gravity’s wins vs. TSM and Dignitas in week 8), Cop dealt out Tons of Damage through strong positioning and big AoE on Corki and Sivir. He managed this even while his team was often behind in gold. Cop doesn’t tend to make flashy, eye-catching plays using incredible mechanics, but his positioning and timing are very impressive. Cop is enabled to position aggressively and pick his windows of opportunity because of strong play from his teammates. Those teammates deserve full credit, but without Cop’s game sense and opportunism, his teammates’ hard work would be for nothing.

After taking a closer look, it doesn’t seem fair to saddle Cop with the “just consistent” label. Yes, he is remarkably consistent, but he’s a lot more than that, as the stats we’ve reviewed demonstrate: Cop is arguably the most valuable AD Carry to his team in the entire LCS. The role of Bunny FuFuu and the rest of Gravity in setting Cop up for success can’t be denied, but Cop is the one landing the kills and carrying the games, and he deserves more recognition for his work.

There will always be an argument to be made that another player put in Cop’s position might perform just as well. I would argue, though, that Cop’s success within Gravity is due to his strong decision making: he doesn’t get impatient and take unnecessary risks or throw himself into harm’s way, but he’s always in position to follow up. That decision-making superiority is just as valuable, if not more valuable, than any amount of mechanical skill. Cop is an exceptional team player, which is why he has benefited so much from having a team that works hard to set him up.

It’s time we let Cop shake off the stigma of being a passive, farming, non-game-breaking player. It’s time we stop calling Cop “just consistent” and start treating him like the top-tier AD Carry he’s proving himself to be.

Do you agree? Or when you watch Cop play, do you still see a play-it-safe, second-fiddle AD Carry? Weigh in!

If you’d like to see more of Cop’s advanced statistics, and stats for every other NA LCS player this split, check out the Player Stats page on Oracle’s Elixir.

A special thank you to Daniel “Exorant” Hume for putting together the infographics for this article and being patient with me while I hemmed and hawed and corrected my numbers.