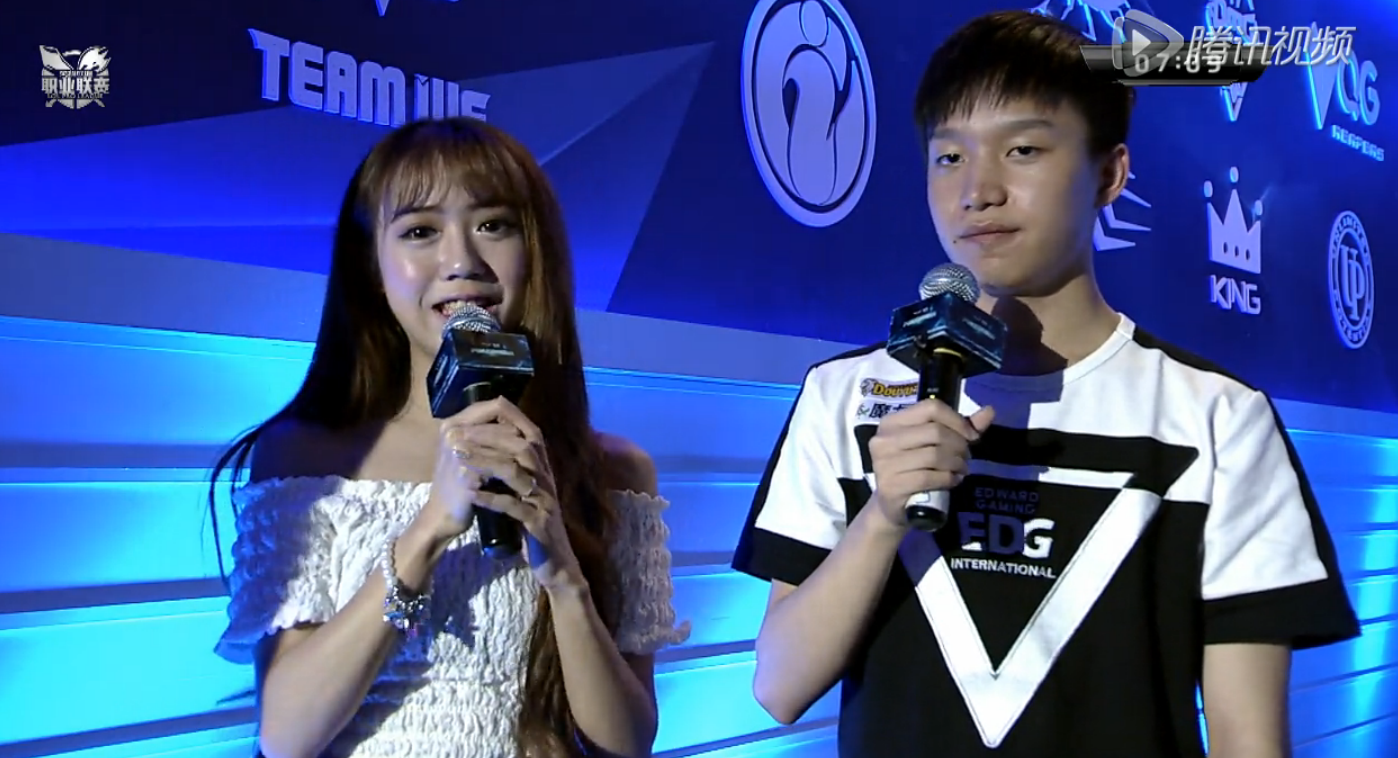 Congratulations to EDG in securing a 2-0 victory today. We’ll be interviewing Clearlove~ say hi to everyone!

Your second game went a lot more smoothly than your first game. Tell us a little bit about how you feel right now.

Clearlove: The first game was a bit..

Clearlove: It was a bit more intense. The second game went a lot more smoothly.

Where, in particular, do you think your team managed to pick up the advantage?

Clearlove: I think with the way we carried out the tempo of the game and the way our pick and ban went, we were stronger than iG.

Many fans, including your coach and manager all thought that you were going to lose out in the first game. Who would’ve thought you’d stand up under pressure and make such a comeback? Can you tell us a little  bit about how it went?

Clearlove: Firstly, we lane-swapped in the first game and we were able to pick out some advantages in the early game. But in the middle game, there were a couple of mistakes made where people were caught out. iG rushed baron and were able to catch up in gold. By the time we hit late game, our team composition had the advantage. In team fights, Azir has a lot of range and Cassiopeia isn’t great at dealing out damage in those situations. She can only focus Maokai. Also, Deft’s build on Sivir was a lot better than Kid’s build on Ezreal. So we were able to find advantages in these team fights. It’s just that iG’s Hecarim was really hard to deal with. It just so happened that he rushed into the baron pit and died, so we were able to win that one.

There was a play before that baron play where you had it stolen from under you. When you saw Hecarim, were you slightly hesitant? Did you feel a sudden lack of confidence? The opposing team had two smites and Hecarim is pretty good at stealing baron.

Clearlove: Not really. I still feel like it was a mistake on my part. I used Q but I wasn’t able to use smite right afterwards. The opposing team had two smites so I wasn’t able to adapt well to the situation.

Are you satisfied with your team’s performance so far?

Clearlove: Since we have a team that rotates its players, I’m pretty satisfied with our results.

How do you feel about your synergy with AmazingJ?

Clearlove: It’s alright, I guess. I don’t think my synergy with AmazingJ is as good as it is with Koro.