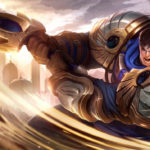 Playing ranked isn’t the only way to enjoy League of Legends. There are multiple casual modes in the game and Riot Games even introduces new and seasonal ones to keep the gameplay experience as fresh as possible.

In One For All, teams vote on a single champion. Everyone on your team will then lock that champ and you’ll spawn onto Summoner’s Rift with 5 copies. The enemy team will also go through the same process and two teams of a single champion then face each other is an experience that every League player has to try.

Like in regular matches, there are also meta champions in One For All matches. Picking one of the following champions can give your team a huge advantage over your enemies since not every champion was designed to shine in a scenario where they’d be surrounded by copies of themselves.

Tanky champions have the easiest time in One For All. Garen is the perfect combination of early game damage and tankiness, so he should be able to put the pressure on the enemy team right off the bat.

Garen also scales well into the midgame. You can tell some of your team members to go for a tanky build while others can focus more on damage dealing.

Despite featuring different skill sets, Darius plays quite similarly to Garen in One For All. It’s relatively tough to kill Darius so trying to get rid of five of them will be a challenge of its own.

Though laning Darius needs no explanation, you’ll need to make sure to take place in early game fights. Feel free to stop farming and help nearby fights since you’ll have strength in numbers, especially with Darius.

If you’re looking to have fun while tryharding in One For All, you can’t go wrong with Malphite. The real challenge for the enemy team will start when all Malphtites hit level six, and you can pull of some of the most epic plays if you manage to coordinate your stuns with your teammates.

While building damage will be necessary, make sure to have a Malphite or two that prefer the tanky route. Tanky Malphites will need to go in first in most cases so the damage dealers can follow.