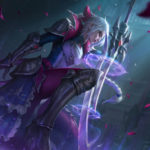 The number of League of Legends skins left to be released this year is dwindling down. Later this week, a whopping 11 new skins are arriving in the game’s shop with the release of Patch 10.25.

The Battle Queen skin line is making its debut this patch cycle. Diana, Qiyana, Katarina, Janna, and League’s newest champion Rell are all receiving regal looks in the upcoming update. Each of the Battle Queen skins dresses up their respective champions in jewel-encrusted armor and frilly up-dos and will cost 1,350 RP each.

Battle Queen Diana is the lucky recipient of this patch cycle’s Prestige Edition. Fans of the champion can unlock the skin’s golden variant for 2,000 event tokens in the Hextech Crafting tab while the Battle Queen event is live.

The Elderwood skin line is also returning in tomorrow’s update with new looks for Ornn, Ivern, Azir, Xayah, and Rakan—all priced at 1,350 RP each. Azir and Ivern’s skins appear to be tied in with the Coven skin universe. Both sport the same dark purple and pink color schemes as the witchy skin line, with Elderwood Ivern’s splash art even featuring a cameo from Coven Morgana. Elderwood Xayah, Rakan, and Ornn, however, boast brighter blue and green accents.

All of the new skins—outside of Battle Queen Diana—will release alongside a set of chromas for additional purchase. Patch 10.25’s batch of skins will be available in the client store beginning Dec. 10.