Are Fun Plus Phoenix for real?

After going undefeated against a soft schedule for weeks, FPX are finally facing some real competition. 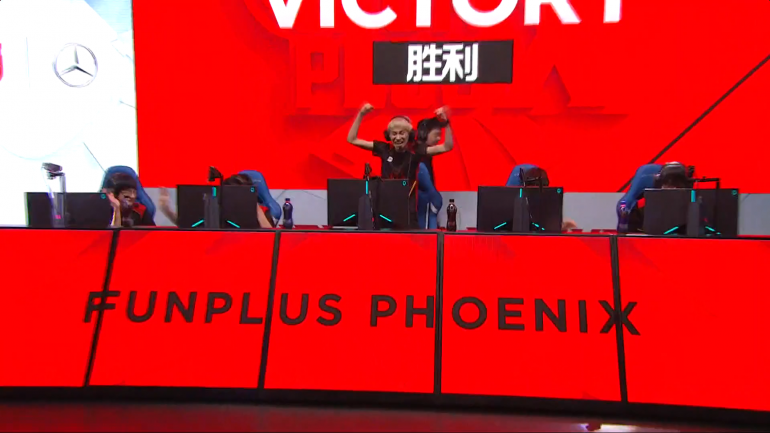 The Chinese New Year typically marks the beginning of the real League of Legends season in the LPL. The season technically starts several weeks before in January, but the best players and teams tend to get serious after the festivities of the season are over. This year, Royal Never Give Up star Jian “Uzi” Zi-hao didn’t even bother suiting up until after the holiday.

Fun Plus Phoenix were the one team that took advantage of the early schedule, unexpectedly going undefeated for six weeks. But this wasn’t a scenario like Griffin in the LCK, who beat all comers. Knocking off the likes of LGD, OMG, and Rogue Warriors is nothing to write about—it was impossible to tell if this team was for real.

Starting in week six, Fun Plus Phoenix faced real competition for the first time. In a four-match stretch, they faced defending world champs Invictus Gaming, defending LPL champs RNG, a playoff hopeful Topsorts team, and finally an EDG squad that never goes away. Here’s how they look at the halfway mark of that stretch.

Invictus Gaming were one of the teams that started 2019 a bit slow.
They’re still in second place and it feels like they could move up whenever they want. But so far, they haven’t been as focused as they were in 2018—at one point last summer, they had their owner play on the LPL stage because they were so far ahead in the standings.

IG aren’t so much suffering championship hangover from their Worlds triumph as they are experimenting with their playstyle. To some degree, this is smart—they’re not going to win Worlds in the same manner they did last year. Everyone needs to evolve.

So far, Fun Plus Phoenix have succeeded by doing the exact opposite. After signing star mid laner Kim “Doinb” Tae-sang last offseason, the team has fully rebuilt themselves around his blatant mid lane aggression and wonky champion pool. They play a simple game: Rally around Doinb and take every available fight. It’s a successful strategy in the skirmish-heavy LPL, a region where coordinated team play usually carries the day.

That wasn’t going to be easy against IG mid laner Song “Rookie” Eu-jin. Both players came from Korea, immersed themselves in Chinese language and culture, and became stars. But despite some solid domestic results, Doinb has never received the same recognition as Rookie, who’s been to Worlds twice and won once while Doinb’s teams are perhaps best known for choking in the playoffs.

Rookie and IG took it to Doinb in the first game of their set. FPX didn’t shy away from fights, but IG answered those all-in exchanges with a brutal ferocity that FPX hadn’t seen yet this year. The second game went much better for the upcomers—jungler Gao “Tian” Tian-Liang got off to a hot start on Olaf as they won the fights and evened the series.

Things got really interesting in the decider. Rookie and IG played their established style of snowballing top lane. But Doinb won mid and then the shenanigans started. He built Righteous Glory on Ryze, intending to use the Demolish rune to splitpush. That’s standard Doinb—he loves to make opponents uncomfortable with his crazy aggressive picks. IG found themselves unable to contest the Ryze in the side lanes, and their own deficiencies in vision meant that Doinb and Fun Plus Phoenix could run them around the map. When it came to Baron time, IG could scarcely contest an objective they couldn’t see.

It was fun to see Doinb’s reaction to beating Rookie, perhaps his greatest rival. While the rest of his teammates remained seated, he alone leaped out of his chair, pumping his fists to an adoring crowd. For one night, he was the heralded champion among the two mid laners. Doinb was the one standing on top of the world.

FPX vs. RNG: Much to learn

The win over IG was an important notch in FPX’s belt, a sign that they could hang with the big boys heading into the meat of their season. But the series vs. RNG was expected by many analysts to be an even tougher test. In contrast to IG, RNG have learned to play a more refined style with better vision and map control. They got thrown off their game by some spurious scrim results last year, but going into Worlds, many people had them, not IG, as the favorites from China.

This was an important match for both sides, and Fun Plus Phoenix came out firing in game one. Similar to the last game vs. IG, FPX survived RNG’s blistering start and countered with a splitpush that RNG could not—or would not—handle. It was jarring to see RNG fail to answer side lanes or contain a Vladimir time bomb on the side of FPX. Eventually, RNG’s team composition fell too far behind to do anything.

The second game was the exact opposite. This time, RNG top laner Shek “AmazingJ” Wai Ho became an unstoppable splitpusher. That set up another third game to decide things, and that’s when Doinb chose to dive back into his bag of champion tricks, pulling out a Sion to contest Li “xiaohu” Yuan-hao’s Syndra.

FPX got a bit unlucky as Tian barely missed a golden opportunity on a early mid lane gank that was eventually turned around by RNG. FPX had no options after that—their all-AD comp was outscaled, they were slow to take a Rift Herald that they desperately needed, and the RNG mid lane turret never went down.

The loss vs. RNG proved that against the best teams in the league, FPX still have a lot to learn. Their map play has improved, but that Sion pick was a disaster. As the year goes on, other teams are going to catch up to Doinb’s champion shenanigans and the way that FPX like to force. Their style is perfectly suited to the LPL, but it’s also their weakness—the best teams, notably RNG, have figured out through sore experience how that style doesn’t work at the highest level. They’ve overcome it, but only after years of beating their heads against the wall.

Fun Plus Phoenix have yet to meet that wall, but they just got a glimpse in their loss to RNG. We still don’t know if they’ll find a way over it when playoff time arrives.