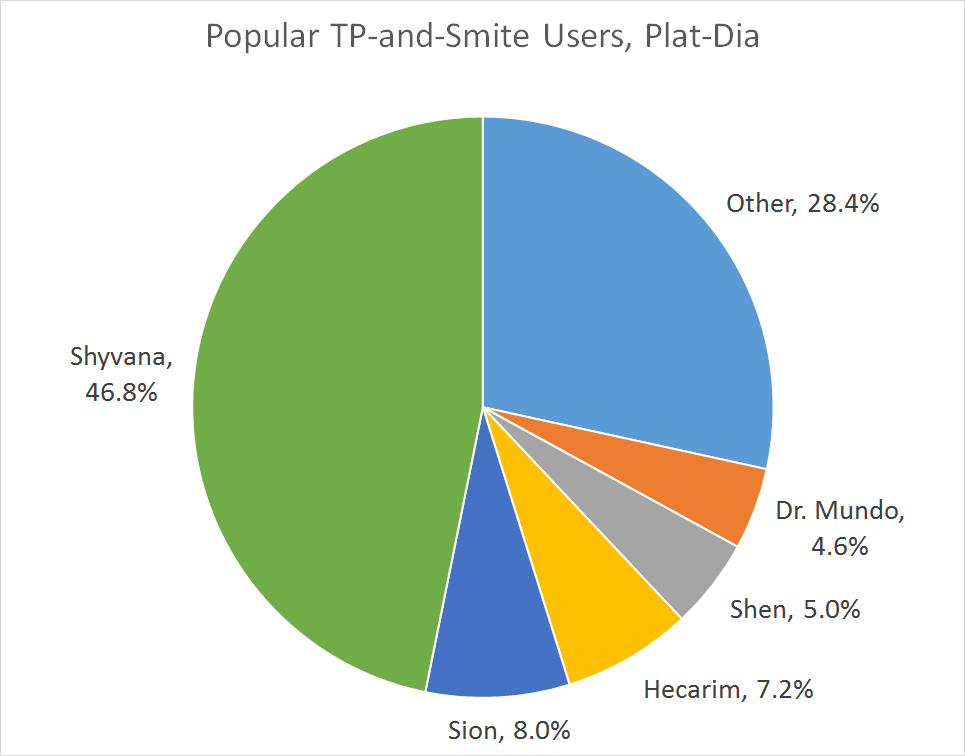 The use of Teleport and Smite top lane (simply as “TP-and-Smite” from this point on with implicit assumption that it is top lane) in competitive play has been the rage lately. Various competitive scene pundits have opinions on whether or not it is actually effective; for this article, I will provide some statistical analysis on the TP+Smite phenomenon for over 400k games of ranked solo queue data on Patch 5.7.

I will demonstrate that TP-and-Smite performs fairly well compared to the more traditional TP-and-Flash/Ghost for numerous champions. I will take the opportunity to illustrate some pitfalls in analyzing aggregated data; I will also argue that we should examine the TP-and-Smite phenomenon in a champion-by-champion case instead of as a whole.

Interestingly, as we move up in elo brackets, the usage of TP-and-Smite increases from 1.1% in Bronze to 9.8% in Diamond. It is unclear to me as to why this is happening, but one may hypothesize that higher elo players have more exposure to professional-level play (via watching LCS, etc.) and are more eager to replicate strategies from it.

Note that the table above seems to show that TP-and-Smite only wins at around 47% for Gold and above brackets. This is actually a very misleading number. In fact, for many top laners, TP-and-Smite seems superior to the more traditional TP-and-Flash/Ghost.

2. The Shyvana Factor in TP-and-Smite

Unfortunately, Shyvana is quite lackluster in solo queue, especially as you move up in elo brackets. With the same Platium-Diamond data above, I derived the win rate for the top 5 TP-and-Smite users:

Therefore, we see that TP-and-Smite seems at least slightly better than TP-and-Flash/Ghost for all five of these champions (two-sample proportions test results  are available upon request). The evidence is particularly strong for Dr. Mundo and Sion, who have a 3%+ win rate difference when moving to TP-Smite from TP-and-Flash/Ghost. TP-and-Smite simply looks worse overall because all except one of these five major users of TP-and-Smite have below 50% win rate.

Similarly, we have shown that the TP-and-Smite strategy looks weak overall in terms of win rate (47% win rate), but most of the TP-and-Smite users are fairly weak in win rate overall. Once we divide the data and look at each champion separately, we see evidence that TP-and-Smite is a good strategy in solo queue, outperforming TP-and-Flash/Ghost for numerous champions.

This also suggests that instead of looking at the TP-and-Smite strategy as a whole, we should look and see why TP-and-Smite is strong on particular champions.

The data used in this article, including lane choice for players, are derived from the Riot API.