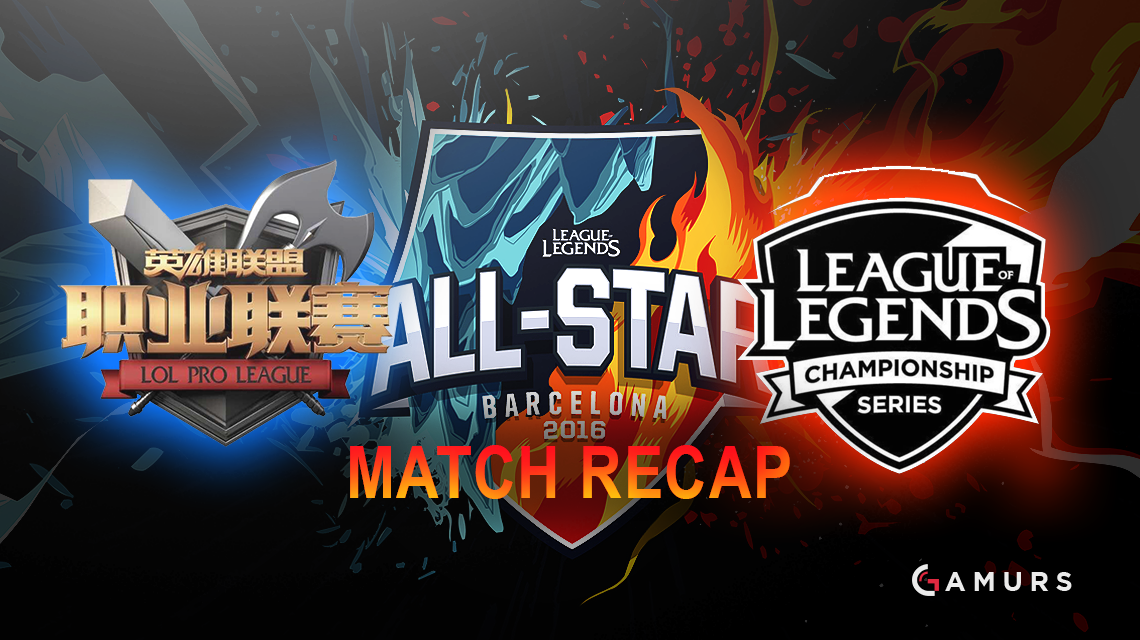 It is that time of year again, for the season-ending event after the World Championships, All-Stars 2016. Teams were created by fan votes to compete in a glorious competition. The second match of the day was the LPL All-Stars playing against the International Wild Card team. Here’s how things went down:

Some early pressure from the IWC team kicked off this game in Barcelona between Team Ice and Team Fire. First blood was secured by the LPL, but Đỗ “Levi” Duy Khánh was able to take one back after a casual roam top to secure a kill.

Down in the bot lane, the IWC picked up another kill with Jian “Uzi” Zi-Hao misclicking Thresh instead of Jhin to deny an equal trade for the LPL All-Stars. He then lost his life in the process to give IWC a 1k gold lead.

Another gank down bot resulted in the LPL picking up two kills when a mid lane roam resulted in a quick pick off a kill that allowed the LPL to regain the lead for Team Ice.

LPL then took complete control of the game, taking the first tower and first drake, extending their lead towards the 15-minute mark with no comeback in sight from the IWC team.

Team Ice’s LPL proceed to pick up the Rift Herald, but plot twist; Zyra was the one to steal it from her own team.

The IWC team was able to take a kill or two for the proceeding game, catching out a few players as they were by themselves, but they were never really in the game, with the LPL completely dominating, increasing their gold lead to over 5k by the 20 minute mark.

A team fight occurred down in the bot lane, reducing IWC to ash as they were aced with no one dying on the LPL side. Team Ice’s LPL used this to their advantage to push forward and take their first inhibitor of the game.

IWC looked to keep the fight against LPL, with the team hoping to find a chance to get back into the game, still picking up small kills and stopping the LPL from getting a Baron to keep the game going.

IWC seemed to finally find their footing and force LPL away, but it all came falling down in the end as the LPL took out the team in a strong counter-attack.

LPL finally found their second inhibitor after the 30-minute mark with the IWC making them work for it throughout the entire game, only after the LPL was finally able to pick up a Baron.

With both Nexus turrets down, the LPL was finally able to get the Nexus and close out the game, giving Team Ice 100 more points to take the lead over Team Fire, 150 to 100.