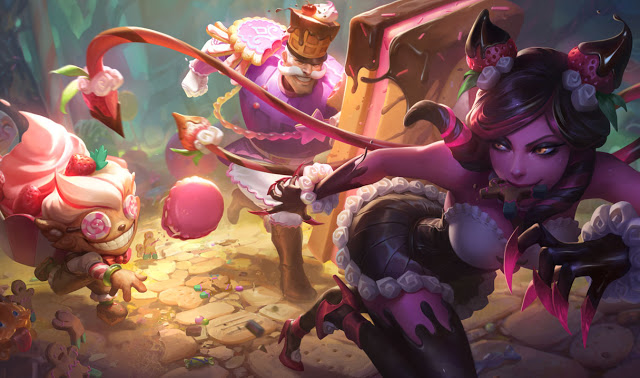 League fans, get your wallets ready. It’s the season of giving, and the skin designers at Riot Games must be feeling generous this patch cycle. A total of 13 new skins are arriving on live servers this holiday season alongside tomorrow’s release of Patch 9.24.

The Sugar Rush skin line is making its comeback after not seeing a release since Candy King Ivern in 2016. Braum, Evelynn, Ziggs, and Zilean are joining the skin line in the latest patch cycle. Priced at 1350 RP, the new Candy Rush skins dress the champions as delicious snacks with graham crackers and dollops of whipped cream.

Soraka is also joining the fight—but on both sides of the field. The Starchild is receiving both a Nightbringer and a Dawnbringer skin, and each will be priced at 1820 RP. Those who purchase one of the two skins will be able to pick up the other at a discounted price.

The rest of the new Dawnbreaker and Nightbringer skins will cost 1350 RP each. All proceeds from Dawnbringer Karma’s skin sales will go to charity as part of Riot’s Social Impact Fund, which was revealed in October during League’s 10th anniversary.

Nightbringer Lee Sin is the lucky recipient of this patch cycle’s Prestige skin. League fans will be able to unlock the golden variant with event tokens earned from missions or store bundles.

Patch 9.23 drops tomorrow morning. As is customary with skin releases, however, this week’s batch of skins won’t arrive on live servers until later in the week.

Here are all the skins coming to League in Patch 9.24: