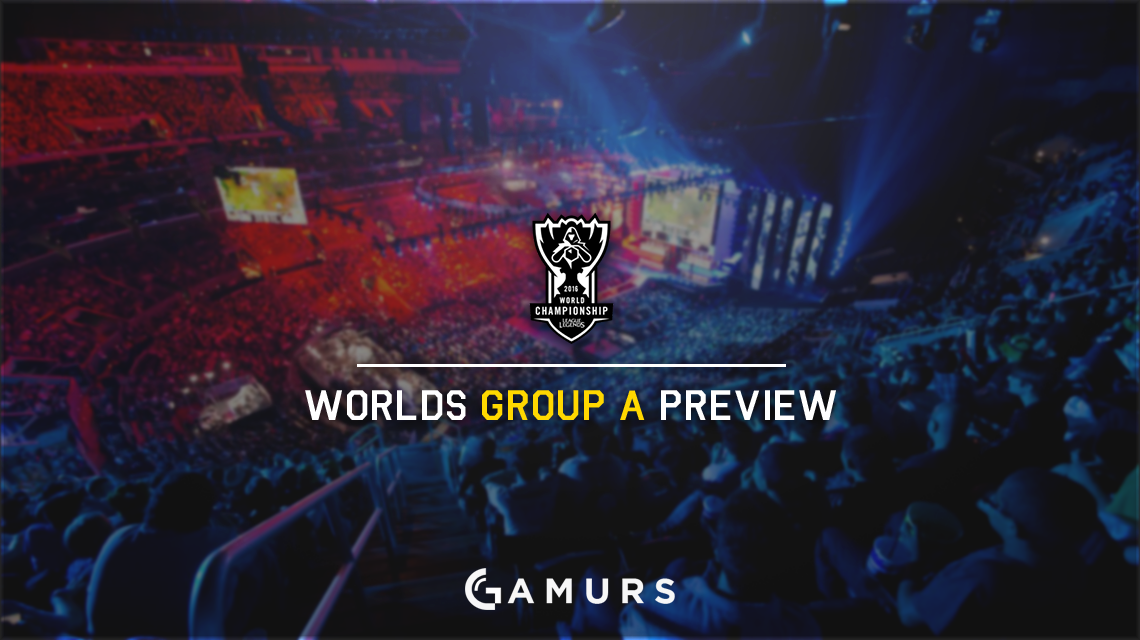 The 2016 League of Legends Season World Championship is upon us. Groups have been drawn, and a flurry of predictions have come from many top analysts and not-so top analysts. To help the average fans, we’re taking a closer look at the teams in each group. First up, Group A.

Most analysts agree on how they think this group will end up and it is likely the most straightforward of all four groups. Still, it’s good to get to know the teams.

The ROX Tigers are here for one reason: Win it all.

Since its inception, the Tigers organization has lived under the shadow of SK Telecom T1. While the Tigers have dominated most of Korea since the team entered the league in Spring 2015, SKT has been the undoing of the Tigers time and time again. The redemption arc is nearing its resolution, but let’s look back on the year ROX has had since placing second last year as the KOO Tigers at Worlds.

Before the start of the 2016 Spring Split, ROX jungler Lee “Hojin” Ho-jin retired and left the starting role to the young Peanut. In the Spring Split, the Tigers went 16-2 to qualify for the finals of the playoffs and a chance to prove their worth as the true best team in Korea. Smeb was the regular season MVP, destroying every top laner he came across in the strongest league in the world. It seemed like the stars were aligning, as the Tigers looked to be in their best form yet and SKT was struggling throughout the split. Alas, SKT came into the final with momentum and a full head of steam to knock the Tigers down 3-1, once again overshadowing the squad. This meant that the Tigers lost their chance to compete on an international stage at the Mid-Season Invitational, and they watched at home as SKT won the tournament.

Going into the Summer Split, the Tigers were more determined than ever and they took the title again. Still, they lost both series to SKT 0-2 that split, so they had something to prove. Once again, to the surprise of no one, Smeb was the regular season MVP after dismantling his opponents in lane game after game. This split, however, things would be different as SKT did not reach the final. The Tigers instead faced off against KT Rolster, winning the series in thrilling 3-2 fashion. It was a victory, but a slightly empty one. The Tigers want SKT.

This team is the favorite to win its group, and the entire tournament. Smeb is almost unanimously the best top laner in the world, and every other player on the team (aside from Kuro) is likely within the top-two at their position. Kuro has a lot to compete with, but he is no slouch. If you are looking to root for a team that is almost guaranteed not to let you down, the Tigers are the players you want to stand behind.

The rookies want revenge for a lackluster MSI. They are coming with Europe’s No. 1 seed and a passion to prove their worth.

As mentioned, this is G2 Esports’ first year in the European League Championship Series. The team managed to qualify for the Spring Split as the third-seeded Challenger team (known by Gamers2 at that time) by defeating SK Gaming, a team boasting current Team SoloMid jungler Dennis “Svenskeren” Johnsen, 3-2.

The players on G2 Esports are jokingly known as the “bad boys” of the EU LCS. Why?

More than the incredible video, though, G2 is a bit bad. In the regular season, the squad is all business, demolishing opponent after opponent and going 15-3 and 10-8-0 in the Spring and Summer Splits respectively. In the Spring Playoffs, G2 kept the momentum rolling by taking down Fnatic and Origen (two Worlds semifinalists last year) 3-1 each to win the title and go to MSI. That is when things got a little interesting.

Now the target of many jokes and memes, G2 took a vacation for two weeks before MSI. The team’s performance at the event was abysmal, going 2-8 in the double round-robin tournament by losing to every single team in attendance aside from the International Wildcard representative of SuperMassive eSports. Because of this, G2 placed outside the top-four at the event and Europe lost a one-seed at Worlds. The top team from Europe would now be placed in Pool B for the group draw, likely making the tournament exceedingly more difficult.

When the Summer Split rolled around, a few roster changes were made. Zven and mithy, the duo lane for Origen during their run in Worlds (Zven was known as Niels at that time) left Origen to join G2. This was a massive upgrade over Kim “<a href="http://lol.esportswikis.com/wiki/Emperor" target="blank”>Emperor” Jin-hyun and Glenn “<a href="http://lol.esportswikis.com/wiki/Hybrid" target="blank”>Hybrid” Doornenbal, as Zven and mithy were the best duo lane in the region by far at the time and one of the best duo lanes in the world. Just two weeks into the split, Mateusz “Kikis” Szkudlarek stepped down from the role of starting top laner, citing discomfort with the team’s six-man roster, and Expect was made the starter. The team was obviously very good, going undefeated in the Summer Split, but something seemed a little off.

“Undefeated” has a loose meaning here, as EU began playing best-of-two series in the Summer Split. G2 won 10 of its series 2-0 and tied the other eight 1-1. Yes the team went undefeated, but not in a traditional sense. PerkZ went from Rookie of the Split in the Spring, to overly cocky and easily punished in the Summer. Expect performed admirably under the circumstances, while Trick, Zven and mithy destroyed anyone in their way. Trick is far and away the strongest player on this roster and in all of Europe, proving that by winning the split MVP award for both the Spring and Summer splits this year.

Not much stands in the way of this team getting that No. 2 spot in the group and making it to the quarterfinals. If you’re looking to follow a strong team, albeit occasionally reckless, that plays with flair, then G2 is the team for you.

Counter Logic Gaming is an enigma, but this team will not go down quietly.

CLG is a perennial powerhouse squad from North America, winning the NA LCS in the 2015 Summer Split and 2016 Spring Split. This team dominated North America for an entire year, but things have been rough lately.

Backing it up a bit, CLG started this year off extremely well by going 13-5 in the Spring Split and claiming the No. 2 spot heading into the playoffs. From there, CLG would defeat Team Liquid 3-2 in the semifinals and narrowly take down Team SoloMid 3-2 in the finals. By winning the Spring Playoffs, CLG qualified for MSI as the North American representative.

Many analysts thought CLG’s good play would end here, as they were pegged to finish outside of the top-four in the tournament. North America’s underdogs did not back down. The first round of the round-robin was very much a rollercoaster for NA fans, as CLG took down powerhouses Flash Wolves (LMS), G2 Esports (EU LCS) and SK Telecom T1 (LCK), but fell to Royal Never Give Up (LPL) and International Wildcard representative SuperMassive. Still, CLG closed out the round-robin stage with a 7-3 record and the No. 2 spot heading into bracket play. There, they defeated Flash Wolves 3-1 and fell to SKT 3-0 in the finals. Though they were the total underdogs, this squad showed its resiliency and made NA respected on the world stage.

Coming back home going into the Summer Split, CLG seemed to be a shoo-in as the No .1 or No. 2 team in the region. The squad was in for a rude awakening as a new meta loomed and TSM boasted a revamped roster ready to decimate the league. It was an inconsistent split for CLG, but the team finished with a 10-8 record and the No. 4 seed going into the playoffs. CLG defeated Liquid in the first round 3-1 before falling 3-0 to TSM in the semifinals and losing the third-place 3-2 to Immortals. It was still enough for CLG to qualify for Worlds as NA’s No. 2 seed, though, as Cloud9 fell to TSM in the finals and neither C9 nor IMT had enough championship points to pass CLG in the rankings.

The shining light for this team has been and likely always will be one man: aphromoo. The star support is regarded as one of the best in the world, not only in his position, but in the game. His veteran shot-calling and playmaking skills will be absolutely necessary for CLG if this team wants to advance in Worlds.

If you are looking for a classic underdog story with big potential, CLG is the team for you.

Considered almost unanimously as the weakest team in the tournament, Albus NoX Luna has something to prove.

As one of the two International Wildcard representatives, little is really known about ANX unless you are a religious follower of all things LoL, or you happen to pay attention to the LoL Continental League (LCL) in Russia. Let’s try to get to know ANX a little bit better.

In the inaugural Spring Split of the LCL, ANX was known as Hard Random (HR). The team dominated the league in the regular season with an 11-3 performance and carried it into the playoffs, sweeping Vega Squadron in the semifinals and winning the finals 3-1 over Team Empire. This secured HR’s spot in the 2016 International Wildcard Invitational and gave the team a chance to qualify for MSI.

HR tied for the top spot in the group stage with SuperMassive eSports and INTZ e-Sports, ending up with the No. 2 seed going into bracket play. From there, HR swept INTZ in the semifinals but fell just short of MSI by dropping 3-1 to SuperMassive in the finals.

HR then renamed to ANX heading into the Summer Split of the LCL and the team continued its domestic domination. The squad went 13-1 in the regular season, swept RoX (not the Tigers) in the semifinals and took Vega Squadron down 3-2 to defend their title and qualify for the International Wildcard Qualifier and a shot at Worlds. This time, the team did not waste its chance.

In a hardfought group stage, ANX ended up as the No. 4 seed going into the Worlds qualifying matches, which meant a fight with No. 1 seed Lyon Gaming. In a five-game thriller, ANX upset Lyon and qualified for Worlds as one of the two International Wildcard representatives.

A common theme in ANX wins seems to be the top lane and bottom lane both performing extremely well. Smurf, aMiracle and Likkrit are all major keys to this team’s success. Not to say that Kira and PvPStejos are unimportant though, as this teams seems to live and die together.

If you are looking for the true, absolute underdog pick, ANX is the team for you.

What do you think of Group A? Who are you rooting for? Let us know you thoughts by commenting below or tweeting us @GAMURScom.