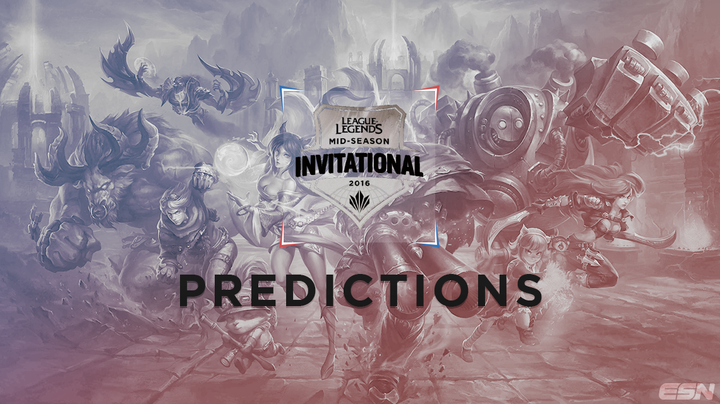 May 4 marks the beginning of the League of Legends 2016 Mid-Season Invitational . The tournament features the winners of every region’s Spring Split and the winner of the 2016 International Wildcard Invitational . Over here at eSportsNation, we had some LoL fans who were more than happy to contribute their MSI predictions.

For an in-depth preview of each team at MSI, check out our article here .

SKT sweeps the predictions here, and it’s no surprise. Despite a slow start to the Spring Split, SKT found their form and ripped through the competition at IEM Katowice and eventually beat a strong ROX Tigers squad 3-1 in the LCK Spring Split Finals.

MSI is the only trophy SKT does not have. Last year, SKT lost 3-2 in an intense matchup with Edward Gaming . The star-studded squad of SKT is showing no signs of stopping their streak of dominance and is looking to take home the MSI crown and an early 2016 World’s bid.

G2 Esports is firmly set in second place among the LoL powerhouses at MSI despite the Spring Split being their very first. This might surprise some; a brand new LoL team that does not have more than a few months worth of experience together being ranked this highly. However, G2 plays well in the current meta and has team synergy that is crucial to success at the international level.

To get to MSI, G2 beat the EU powerhouses Fnatic and Origen 3-1 in the semi-final and Grand Final, respectively. It was not an easy path, but it has adequately prepared G2 for the road ahead.

The only foreseeable weakness for the EU LCS rookies is their inexperience compared to the other teams. That does not mean they will not give the other teams a run for their money

Flash Wolves is in third here. Why? Well, Taiwan does not have much notoriety in the world compared to the rest of the regions, especially this season because there was not a Taiwanese team at IEM Katowice.

This does not mean Flash Wolves are afraid. Not at all.

Flash Wolves is an aggressive team that will punish their competition for making mistakes. This is almost the same team that placed Top 8 at World’s last year. In the Spring Split (including playoffs), this team had an average KDA of 7.34. Flash Wolves can play, and they are ready to make a name for a Taiwan region that has lacked international glory since Taipei Assassins in 2012.

RNG is in a close fourth to Flash Wolves. They both dominated in their Spring Splits (of course they did; they had to dominate to get to MSI), but why is China lower than their Taiwanese counterparts?

Recent international play has many believing that China is currently in a slump.

At World’s last year, China was expected to be among the top finishers, but LGD Gaming did not even make it past the Group Stage and Edward Gaming was quickly beat 3-0 by Fnatic in the Quarterfinals. At IEM Katowice, Qiao Gu Reapers was dispatched by eventual champions SKT and a rebuilding Fnatic squad.

CLG comes in fifth and not far behind RNG. There are two immediate reasons as to why CLG is not higher. They did not dominate in their Spring Split Playoffs and they are from NA.

To get to MSI, CLG beat a young Team Liquid 3-2 in the semi-finals. That series was decided by a clutch double-teleport play by the star of CLG, Darshan “ Darshan ” Upadhyaha, and CLG rookie, Choi “ Huhi ” Jae-hyun. In the finals, CLG barely squeaked by Team SoloMid in a 3-2 series that came down to one last teamfight.

And they are from NA. You know, the region that did not have a single team make it in the quarter-finals at World’s last year. The region that got – to put it nicely – destroyed by SKT at IEM Katowice.

However, this CLG team is not the same team that did not make it to the quarter-finals and got destroyed at IEM Katowice. They have had their team chemistry tested and beat the best teams NA currently has to offer.

SuperMassive is in dead last. This could be one of the key advantages coming into MSI, though.

Everyone is overlooking SuperMassive. No one knows what they are really good and bad at. No one has played against them, and this could be a good thing.

Just because SuperMassive is a wild-card team does not mean they cannot keep up with the rest of the teams at MSI. They might surprise us all.

What are your thoughts on our overall predictions? Who do you think will win it all? Let us know. For more eSports news and coverage, follow us on Twitter – @eSportsNation .