So, we’re about to finish this week’s series. This last deck is my deck of choice for this week: The Warrior Control.

Warrior Control was always a deck I had enormous fun with, but within the last weeks it suffered a lot from the new Naxxramas cards, because traditional Warrior Control Builds did not run any form of silences.

With the release of the latest wing, I saw 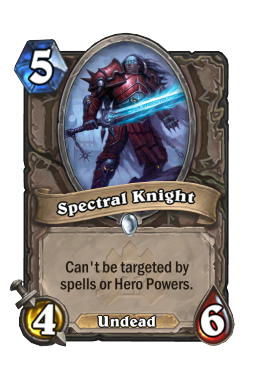 spectral-knight as a huge boost to some decks, as said before in the previous 2 articles I wrote for this week. But enough of talking, we already had much of that before and I think if you came this far from the last 2 articles, you want to get right into the deck, and to know why I made such an exotic Warrior Control build.

spectral-knight gave warrior control a big boost, might not seem like much, but kind of like the Control Priest build, the 5-drop spot was lacking and the only thing you could put into that spot was

azure-drake, and  in the last week we had

sludge-belcher it wasn’t the kind of card that fits very well in the Warrior build. Warrior has a strong early game, a strong late game but a mediocre mid game, that is why the

spectral-knight is such a big addition to the deck.

Then we get another problem: The card advantage became weaker. We lost 2 sure draws in order to get a strong mid game. I had no choice but to drop some of the weak spots for cards that could cycle themselves. The addition of the 2

slams was obvious, due to its interaction with warrior mechanics as well as the obvious fact we needed card draw. Then it came one last slot, and my latest addition to the deck:

bloodmage-thalnos. I was reluctant at doing so at first, but my only other options were:

ysera. Ysera seemed like the most obvious option, but I was afraid I would hit a aggro wall and not be able to do much against those decks, therefore I decided to go for the Thalnos aproach first and boy…. that worked well.

azure-drake, it also fixed our curving problems as well as the last card draw spot. Now, I have not tested

ysera in the Bloodmage’s spot, but if you want to try it out, feel free to do so. Don’t forget to tell me the results in the comments, but I gotta tell you right now I am loving Thalnos just too much. Another addition to the deck was 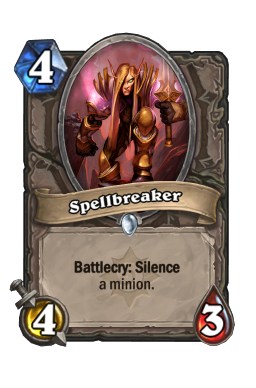 spellbreaker, I decided to add this guy in the last-minute while creating the deck, mostly because I started to think Silence was starting to get more value than Charge in the current meta. And yes, it worked. Silence was the weakest point of warrior control, so I guess adding these guys, at this point, is more than justified;

Some tips on how to play this deck: since our mid game is no longer mediocre, we don’t need

alexstrasza to catch up anymore. Try to always go for board control, Warrior spells are strong and cheap enough to make it so you’ll be able to always maintain board control once you get it, but do not overextend against Midrange or Control decks, don’t forget some of them have mass removal spells. Always prioritize dropping

sylvanas-windrunner against opponents with 3 or more cards in hand due to the fact they’re more protected than the 2 legendaries and require more effort to be killed.

This is my deck of choice for this week, I hope you all enjoy playing this as much as I am and have a good time going up in the ranks, I won 8 games straight before loosing my first match to a Hunter Midrange.

Control Warrior is, in general, much stronger than it was before, these new additions may push Control Warrior back to a real threat in the meta as it once was, only time will tell!