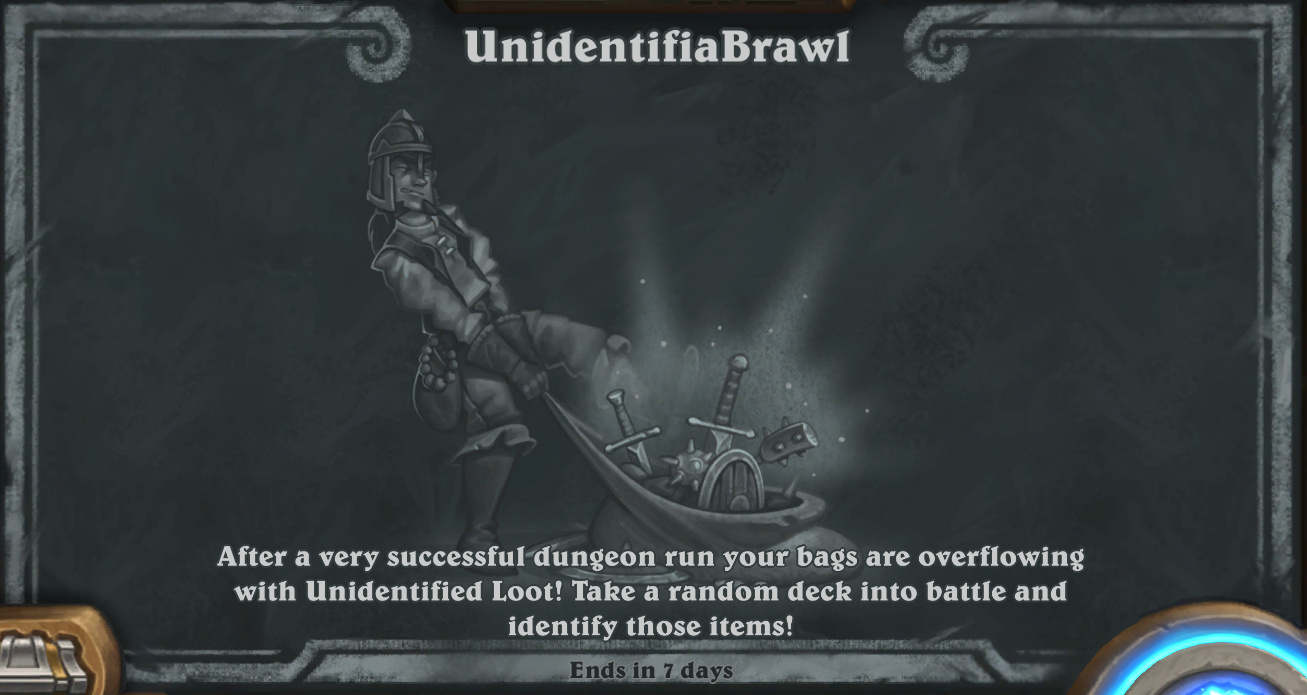 Each Wednesday, Hearthstone’s Tavern Brawl mode has a weekly challenge that players can participate in to claim a free classic pack for winning. This week’s Tavern Brawl, UnidentifiBrawl, makes its second appearance in two years.

In this Tavern Brawl, players pick one of the 10 classes and are given a random deck. The random deck also includes multiple copies of each of the following cards from the Kobolds And Catacombs expansion: Unidentified Elixir, Unidentified Maul, and Unidentified Shield.

When these cards are drawn, they’re randomly given one bonus effect out of four. Unidentified Elixir, besides giving a minion +2/+2, can also give a minion a Deathrattle effect that returns it to hand, Divine Shield, Lifesteal, or even summon a 1/1 copy of the selected minion. Unidentified Maul, in addition to being a 2/2 weapon, can summon two 1/1 Silver Hand Recruits, give your minions +1 attack, give your minions Divine Shield, or give your minions Taunt. Lastly, Unidentified Shield is a six-mana spell that gives you five Armor but can also summon a 5/5 Golem, deal five damage to anything, equip a 5/2 weapon for you, or give an extra 10 bonus Armor.

As with most Tavern Brawls with random decks and effects, there are multiple ways to improve your odds of winning starting from the class select screen. Due to the nature of the featured cards, you’ll want to quickly establish a board to keep tempo of the game and snowball it to victory. This means that Demon Hunter, Paladin, and Shaman are some of the best classes you can pick for this Brawl.

Demon Hunter is potent because the class is fairly new, so the random card quality is higher on average. In addition to this, its Hero Power is the cheapest, which allows you to respond to enemy threats if you can’t establish early tempo plays. Both Shaman and Paladin are powerful because their Hero Power guarantees them a playable minion by turn two. This curve is important because the power that Unidentified Elixir can provide by buffing one of your minions with extra stats and either Divine Shield or an extra copy can solidify most boards in a random format like this.

During the mulligan, you should generally throw away your Unidentified Elixirs and Shields since you have a high chance of drawing into them again by the turn you’re able to play them. Keep any proactive turn one or turn two plays since they allow you to establish a board when you can play your Unidentified Elixir and Maul. Unidentified Maul is sometimes fine to keep in the mulligan, but only the “Summon two 1/1 Silver Hand Recruits” effect can do something when your board is empty.

Players have until next Wednesday, Sept. 9 to win and get a free classic pack before next week’s Tavern Brawl arrives.