Every Wednesday, Hearthstone adds a Tavern Brawl that lets players participate in and earn a classic pack for winning that week. This week’s Tavern Brawl, called the Rumbledome, brings a new challenge in combination with the Felfire Festival.

Players can pick from one of eight characters to get a prebuilt deck. Most characters are dual-class and some have cards that are unique to the Trial by Felfire adventure. At the start of each game, you’re given the chance to discover from a choice of powerful, unique weapons.

Here are all of the weapons that you can discover: 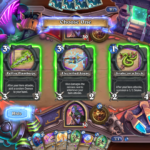 Out of these weapons, Snake on a Stick and Improvised Flamethrower are some of the strongest ones you can pick from. Snake on a Stick is a proactive weapon that can come down as soon as turn one and let you develop 1/1 minions while clearing the opponent’s board. Improvised Flamethrower is a powerful, reactive tool that lets you keep board control fairly easily the turn you play it and the turn you destroy it.

Here are all of the playable characters and what their decks are.

Karnuk is a Midrange Demon Hunter-Priest hybrid. While he may have a couple of proactive tools under his belt, like Sethekk Veilweaver, his deck leans more toward reactive cards from both classes, like Penance and Immolation Aura. Discovering a proactive weapon like Snake on a Stick can help curb a weak early game.

Elise is a Dragon Control Druid-Priest hybrid. While Elise’s aim is to outvalue opponents with late-game Dragons and premium reactive removal, there are some proactive early plays that Elise can fish for with Radiant Elemental and Priest buff cards to combo with.

Krizziki uses a Self-Damage Warlock-Priest deck with a couple of unique cards from the Trial by Felfire adventure. While the Self-Damage archetype had some cards, like Duskbat, that weren’t too powerful in standard, the use of the free weapons given to you can serve as an activator for these cards to let them reach their maximum potential. Besides Duskbat, Diseased Vulture is another card to look out for when you pick Krizziki.

Aranna is a Midrange Hunter and Demon Hunter hybrid. There’s nothing too exciting about her deck when it comes to unique cards, though. Finding a playable curve in the mulligan, or finding an early Rumbledome exclusive weapon, will help you succeed with her.

Mecha-Jaraxxus is a Pure Warlock deck with cards from the Trial by Felfire adventure. Since Jaraxxus has powerful PvE cards, fishing for them early in mulligan and in life taps can help you outvalue your opponent. Some key cards to look for are Deteriorate, Rusted Voidwalker, Rustsworn Champion, and Rusted Basilisk. While Jaraxxus is purely Warlock, he also does use Primes from other classes, like Murgur Murgurgle, Reliquary of Souls, and Kargath Bladefist.

Shalja is an Evolve and Spell Shaman-Demon Hunter hybrid. But unfortunately for Shalja, she doesn’t have too many unique cards to her name. The synergy cards she’s using are also Shaman spell-focused cards from Ashes of Outland, which isn’t too broken in this limited format.

Sklibb is a Spell Token Demon Hunter-Druid hybrid using mostly Ashes of Outland cards. While his deck has a higher proactive card quality than most others, a lot of the other classes have powerful tools to halt his aggression. This means that if you’re facing off against Sklibb, Improvised Flamethrower is nearly an automatic win against him if you’re given the chance to pick it.

Illidan is a Midrange Pure Demon Hunter. Much like Aranna, there aren’t too many unique cards when picking Illidan. Besides fishing for an early playable curve, there isn’t too much strategy to deviate from when picking Illidan, aside from your first turn weapon choice.

While no Hero is strictly busted or better than the other, if you’re looking to have a higher chance of using newer cards, Mecha-Jaraxxus is your best bet. Otherwise, pick whichever character has a similar playstyle to what you enjoy playing in conventional Hearthstone.

Players have until next Wednesday, July 8 to earn victory and get a free classic pack before next week’s Tavern Brawl arrives. In addition, if you play the Tavern Brawl four times, you’ll also be rewarded with a bunch of packs due to the legendary quest granted for logging in.