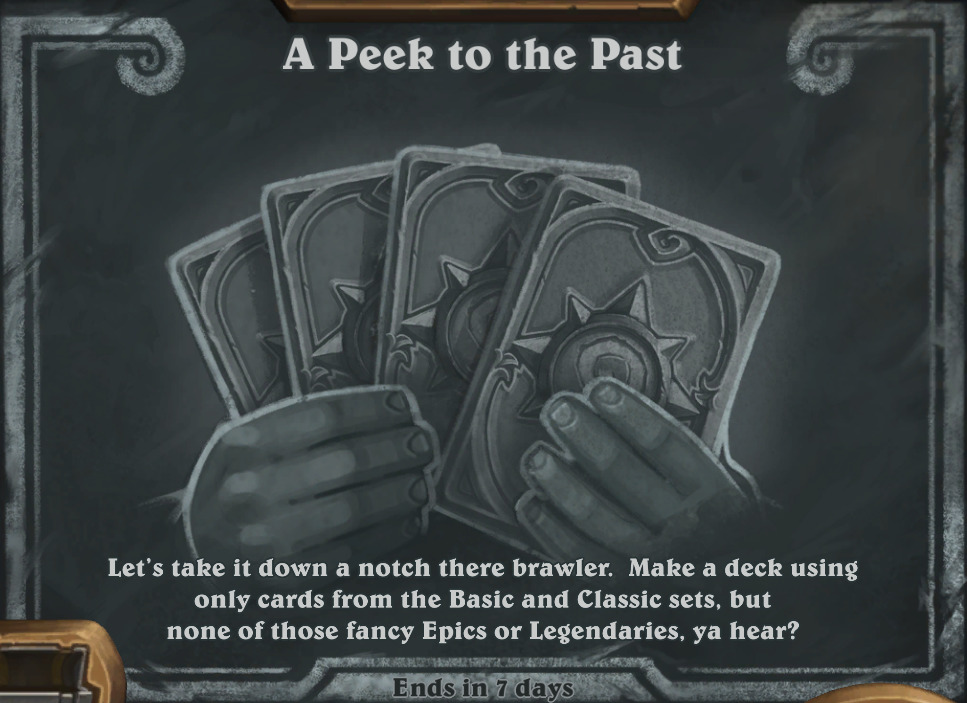 Every Wednesday, Hearthstone’s Tavern Brawl mode has a weekly challenge that players can participate in to claim a free classic pack. This week’s Tavern Brawl, A Peek to the Past, is making its third appearance in the digital card game.

In this Tavern Brawl, players construct a deck using only classic and basic cards. But as an added twist to this limited format, cards that are Epic and Legendary rarity aren’t allowed.

Since this Brawl looks at the card quality of the core and unchanging set of Hearthstone, classes with a strong fundamental set will be top-tier choices this week. In addition, classes that had their classic or basic cards nerfed or added to the hall of fame (like Rogue’s Cold Blood or Warlock’s Power Overwhelming) won’t be reverted, so certain classes that may have flourished in the past will be weaker here.

Here are some of the best decks to take into this Brawl:

Mage has by far the most efficient all-around tool kit in the classic set for a midrange deck. It has tools to be aggressive in Sorcerer’s Apprentice, Frostbolt, and Fireball. Mages also wield powerful answers in the form of Polymorph, Blizzard, and Flamestrike. This list aims to get onto the board quickly with Sorcerer’s Apprentice or nerfed Mana Wyrm to try to take control of the board and curve into threats that can end the game in combination with Fireball or Frostbolt for lethal opportunities. This deck also features a new card, Arcane Devourer, as a relatively similar minion to Archmage Antonidas in a weaker format like this where if it’s not answered immediately, the opponent will quickly lose.

This deck uses a secret shell in the form of Kirin Tor Mage and Ethereal Arcanist, as well as the two best secrets in the format, Mirror Image and Counterspell. While the secrets will be obvious, they’ll still be tough to play around whenever an opponent is forced to run into either one.

While Priest may not be the highest-tier class at first glance in a limited format, its classic and basic set got reworked at the start of the year. This can create some fun plays for players who are looking for a less aggressive class than Mage or Warrior. Most cards on the list are self-explanatory since they either give you more value (like Thoughtsteal), more threats (all of your minions), or more answers (Shadow Words, Shadow Madness, and Holy Nova).

Some less self-explanatory cards that are weird and out of place are Secretkeeper and Mind Control. While Secretkeeper looks weird in Priest since it uses no secrets, this card serves as a tech if Mage becomes too popular in the format. If you can curve Secretkeeper before any Mage opponents play their secrets, you threaten to have a minion that can grow whenever the opponent plays their cards. Mind Control is also a fun inclusion even though games are more likely to be over by the time it’s playable. If it gets used (like in the potential control mirror in this format), it is often back-breaking and game-winning.

If casting spells isn’t up to your speed, this aggressive Warrior list could fit your playstyle. Warrior aims to get onto the board more consistently than Mage and wants to win before the opponent can answer their threats properly. While your minions go face, you can use your weapons to clear opposing boards, giving your minions free passage to remain uncontested.

Although it was enabled in more recent Tavern Brawls, fans of the Demon Hunter class will be disappointed that the class is ineligible for play here. This is because their basic set, while limited, is higher in power level compared to the original nine.

Players have until next Wednesday, July 22 to earn victory and get a free classic pack before next week’s Tavern Brawl arrives.