Welcome back to the Pirate Ship

Hello again to my little corner of the Hearthstone world. I am glad you are here and ready to tell you a little more about Pirate Rogue.

Basically, the plan was to play at least 30-40 games on the ladder with the deck Pirate Rogue or until Rank 15. At that time I was going to come back with some mulligans, tips and etc. about the deck. Afterwards, I would keep going and posting ever five ranks or so…or until the deck petered out. Well, I am back and I am not at Rank 15. I am at Rank 17 with this deck and let’s look at why.

Also, I was going to have a video of highlights and me going through some deck play but I ran into some technical difficulties. I will have some videos of game play of other decks very soon.

The Ladder Meta and Match Ups

It is very early in this Season and that means everyone and their brother is trying to quickly climb higher as fast as they can. What that means is everyone seems to be playing the fast Aggro decks like Aggro Druid or Aggro/Face Hunter. The problem with that is those decks are what give Pirate Rogue fits. I did not win a single game against those decks within the ladder. Basically, they are just too quick and this deck, which is an interesting thing, just takes too long to get rolling. By the time you get things going, it is too late to come back and you spend the rest of the game playing catch up.

The decks that this deck did well against was Tempo Mage, Mech Mage, any Shaman deck, and even Secret Paladin sometimes. Those decks take a smidgen of time to get going, or at least it did when I played against them, and that allows you to get into turns 4-6 and start getting into the combos. When the combos and Pirates are there, the deck can control and run the board very well. That is where the deck runs into problems. If you don’t get the perfect draw or playing a combo of 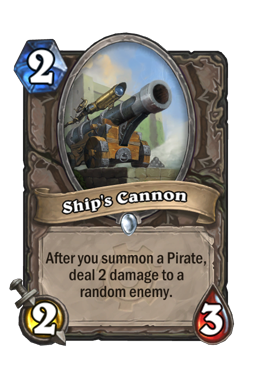 ships-cannon with another Pirate card, then you are in trouble.

I started out at Rank 21 with all the stars lit up. I made it to Rank 19 very quick. That is where things started falling apart. I would lose two games and then win one. It was very much two steps forward, one step back. This deck literally won 50% of the time. The record I had with this deck was 20-20.

The problem with that is you never seem to get anywhere on the ladder, or you do it at such a long grind that it would take you forever to get to where you want to go…if you ever do.

The other thing is this deck is very much choice based and that makes it a very tough deck to manage. It seems to give you choices but that is a blessing and a problem.

It always seems that the deck makes you always second guess your moves. I always went back and watched video of my games (yes, you should record yourself to see how you play) and find a choice I could go back and do another way that may or may not have won the game.

This deck feels more like a gimmick than an actual competitive deck.

Now, the great thing about this deck, in my opinion, is it can catch people off guard. You do not see this deck in the ladder at all and because of that you could catch people off guard. You just need to start things off looking like you are playing an Oil Rogue deck and then start dropping Pirates on them. That can increase the chances of winning.

Also, when the deck runs like it should, it can be very effective at controlling the board and getting a win. If you can keep

ships-cannon on the board and get your weapon out with some Pirates, the deck can deal damage very quickly.

sprint can get your hand back in the late game, if you actually make it there.

This deck is really fun to play with in a casual way and but can also cause a lot of tilt when things don’t come to you via the draw like you want.

I really did want this deck to carry me through the ladder to single digit rank but it just wasn’t meant to be. I truly sat back and laughed at some people not having any idea what to do with the Pirate combos but at the same time I wanted to smash my mouse when those combos seemed to never come or come too late.

This deck also is terrible in the matches against other Rogues.

I did not win one game against other Rogues because they seemed to be running Oil Rogue, which in the end, is the better deck.

This deck is great if you need a decent deck on a budget to play on the ladder with. If you are lucky and get good match-ups, you could carry this deck a little farther than I did. If you can build a better deck though, I would.

I am all about playing a deck with choices and options within it. That is why I always did love Oil Rogue and the like. The problem is this seems to take out the best parts of that deck and replaces it with a combo that just never seems to come when you need it most.

In the end, I can’t recommend this deck and would stick to using it if you need a slightly budget deck or want to just go have some fun in casual. There are better decks that you can build around the same dust, Aggro/Face Hunter comes to mind, that will probably get you up the ladder a little faster and with a lot less tilt. The match up problems this have, especially in the early ladder, makes it very hard to make a strong run into the next tier of ranks within the ladder.

Make sure to leave comments below because I am sure some of you may disagree with me and I would love to see how you could make this deck better or why you think I failed with it. Also be sure to follow me on Twitter and at Twitch.

Until next time my friends, have some great draws and may you always avoid the tilt.