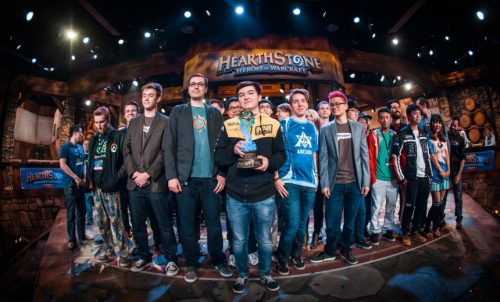 The Hearthstone World Championship 2015 is now over and a new champion has emerged. It is Sebastian “Ostkaka” Engwall taking the prestigious Hearthstone title.

In the quarter-finals, we saw some decent battles and it became clear who would advance to the top of the podium. Thijs “ThijsNL” Molendijk took a close victory against Kranich in a tough 3-2 series and managed to become one of the first semi-finalists. On his tail was Ostkaka, after a win against Pinpingho. The other two semi-finalists were Kno, who managed to get a 3-1 win against Chinese DieMeng, and Hotform, who eliminated the other Chinese player, Zoro, after a hard-fought battle that ended 3-2. In both semi-finals, and especially on the one between the two European players, we saw some of the most intense series the competitive Hearthstone scene has ever witnessed, both ending in a score of 3-2. Ostkaka managed to overcome the tournament favorite, ThijsNL, who almost took the series when he turned the 2-0 against him into a 2-2. In the other semi-final Hotform took a close win against Kno. The finals were pretty one-sided, as Ostkaka managed to steamroll Dylan “Hotform” Mullis with an easy 3-0 victory. The Swedish Na’Vi player took home the cherished trophy as well as $100,000. This prize puts him in the #4 spot on the list of highest total prize pool earnings in Hearthstone, only behind Firebat, TiddlerCelestial, and Kolento. Do you believe Ostkaka deserved the trophy? Would you want someone else to have won? Let us know in the comments below.