I might be copy-pasting this intro in the next parts of this article because of the number of cards i’ll be doing.

Alright so Blizzard kind of trolled me here.

I thought we were going to have yet another 5-6 cards announcement today, but instead we got a huge woopy 24 cards revealed today.

The craziest thing though, is how much there is to discuss about each cards, which should still leave us with tons of stuff to talk about each card regardless of how big the streak of cards shown to us was.

After some thinking I decided to continue with my strategy of review, but this time instead of 4 cards per article, i’ll be doing a huge review with 8 cards per part.

So, without any more delays, let’s start this thing!

Alright so we start with a card that has been giving people some rather off-the-curve thinkings. This isn’t a good card for a Midrange-ish strategy at all. The healing rarely will be the thing you’re needing when playing this card – Usually, Druid Midrange Strategies are looking for things that are completely different than this.

Sure, this card can easily be played into heavier Taunt-oriented Ramp versions of Druid, but these decks haven’t proven to be good at any point in the Hearthstone history, and Midrange lists always end up taking the Ramp’s place in some point.

This doesn’t mean this card won’t see play. Ramp Druid is a lot easier to build than Midrange, especially today that we actually have to think on a whole synergetic deck base instead of the same one.

Moonglade Portal is a card that you can easily add to any of your “Lots-o-Taunt” Druid deck, I just don’t think the strategy itself is good enough to surpass Midrange.

brawl in Control Warrior decks. This does seem to have a decent appeal in aggressive Midrange decks such as Tempo Warrior and Dragon Warrior because it makes it possible for you to wipe the opposing Aggro board without having to run things such as Brawl. However, there are just way better (and less situational) cards in Dragon Warrior already, and the simple fact this is a situational card makes me doubt if we would want to play this in our Tempo Warrior.

fiery-war-axe if you can constantly make it work. Sure, you can totem it up to make this card work, but chances are, nowadays, you don’t want to Totem up turn 2. Sure, Control Shaman exists, but even there I wouldn’t be playing a card such as this one simply because there doesn’t seem to be any other way of activating this without making our deck worse.

The first thing that comes to mind is

bloodmage-thalnos, which activates this card, but I don’t think I would want to run Thalnos in my Shaman decks, and outside of Thalnos I don’t see other cards such as

cult-sorcerer for us to really want to run Spirit Claws.

This isn’t a bad card, but it won’t see play – not right now.

Even if you could consistently make this a 2/2 before it trades or dies, in the end this is just a super situational card to be played turn 1, and a completely irrelevant card played turns 4 onwards.

Feels strange to think about the viability of this card. It is a card that requires a secret in play, so if you are not playing Paladin and you want to curve this (because that is when this becomes an insane card) it means your opponent passed the turn without activating your secrets, so you’re probably already winning or losing terribly.

This card could be a beast, it would make way too much sense actually: Hunter sinergy, Secret Sinergy, cloacked-huntress sinergy and so on.

However, this isn’t a beast, meaning it loses some of the Hunter sinergy it was supposed to have.

A new archetype can pop up that plays around with the new Hunter cards, but I have to admit I don’t believe it’ll be better than already existing Midrange Hunter with

Maybe there are other strategies for this card that I haven’t thought about yet, but something tells me that if this card is to see play, it’ll need a whole new deck built around it.

This card, together with

spirit-claws, makes me strongly believe that Blizzard is already planning a post-rotation Shaman deck that will look completely different from what we are seeing today.

This is indeed a buffed version of 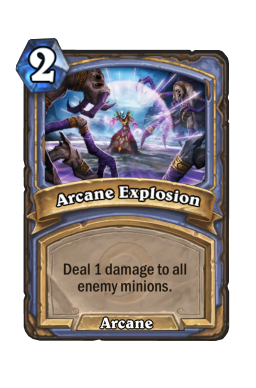 arcane-explosion, not that it says much anyway – The card never saw play. But the fact we are seeing Spell Power sinergic cards such as the two Shaman cards we analyzed right now just makes me believe Blizzard is planning ahead.

Oh, and just for the record: I don’t believe this card will see play right now, mostly because much like Spirit Claws there isn’t a shell to build it around.

A damn shame Blizzard release such bad cards for a class that is lacking high tier strategies right now such as Rogue.

This expansion Blizzard is trying way too hard to push “random stuff from other class” strategies into Rogue, I don’t think that is a problem at all, I just don’t recall Blizzard trying to push such bad strategies in their “loved” classes (Warrior, Warlock and Druid).

So, before I start raging, i’ll just state my opinion on this card: it’s terrible, totally not what you want to play in your Rogue deck.

During this whole expansion it was clear that Rogues needed something consistent to leave the Miracle strategy behind  – it has survived for quite some time, not because it’s overpowered or anything at this point, but because it is the only viable Rogue strategy in the game right now. However, instead of giving consistent cards not fitting the Miracle strategy (let’s say good Deathrattles for N’Zoth Rogue), Blizzard decided to push this total crapster strategy. I don’t understand what is the deal with Blizzard constantly giving Rogues and Priest horrible, terrible, bad, “fun” cards and giving the already consistent classes even more consistent tools for them to create tons and tons of different tier-1 strategies.

preparation so cards such as this one would become viable.

Sure, this card is totally NOT going to see play right now, because Shaman is a Class running way too many overpowered cards, but this isn’t a totally bad card is you can consistently make it work.

Actually, come to think of it, I realized

violet-teacher is actually such a better card that I would never want to run this card, even if I could run it in other classes.

Time to rest a little before writing more about the cards released today.

Hope you guys enjoyed what we’ve been discussing so far! Oh, and don’t mind the rage mode I entered in the Rogue card review, I just had to post that somewhere.

It has been tons of fun writing all these reviews for you guys! See you again soon in the following parts of today’s reviews!