The expansion is about to end. Not that it will rotate or anything, but I feel that with only 5 months left until the end of the year, and two more expansions having to be released until december, we are likely to see an expansion announcement within the week.

In any case, it has been some time since Whispers of the Old Gods has been out, and the tournament scene, for both professional and open, has seen quite a lot of improvement to the point we are now able to precisely tell which tournament builds are the optimal ones.

With this in mind, I decided it was time to present to you, my beloved readers, the cookie-cutter Tournament builds in which you should probably be bringing to your open tournaments!

Take note that I will be adding an extra class in some of the cookie-cutter build so that you are able to choose one deck to leave out, in case of personal preference and/or budget issues.

Before we begin, let us take a brief moment to talk abou the cookie-cutter king: The Zoo.

The build is simply too good to be left out of any cookie-cutter tournament choice, the fact Zoo counters such an array of top-picked tournament decks means we usually want to both pick as well as ban Zoo on sight.

This doesn’t mean Zoo is the strongest deck in the game, rather that it counters the majority of the usual tournament picks, such as Midrange Hunter, Shaman (any build), Tempo Mage and C’Thun Druid while having an evenly matched matchup against Dragon Warrior and no real hard-counter.

Truth be told, when no bans are involved we have to face the truth: We will be facing Zoo. This means that even if we have to play decks such as Midrange Hunter and Shaman (because they’re that good) we’ll have to do some tuning to them so we are able to face Zoo.

In case of Midrange Hunter, we have to take a faster approach to it to make sure we won’t be giving our opponent a free win pass if they are able to queue their Zoo into our Hunter, that is why we pick Hybrid Hunter over it. The slight decrease in the winning chances against slower decks is fine because we’ll still have the upper hand in these matchups while not having such an abysmally bad win rate against Zoo.

In the Shaman deck we tech in a copy of

lightning-storm which shall ultimately also help against Hunters and Shaman mirrors. This tech is only present in this deck because we can ultimately play against Zoo, otherwise a copy of

Control and C’Thun Warrior here are the decks of choice over Tempo and Dragon Warrior because of their plainer win charts over the roller coaster of both Tempo Warrior and Dragon Warrior. Any of those versions should be good, it is only up to you which one you like best.

Note that having a plainer win-rate-charted deck on no-ban tournaments is far superior than ones that specifically counter other decks because you are bound to face a greater array of opponents than you are in ban tournaments.

Now that we are finally banning Zoo we are able to run slower decks with more overall consistency.

This means running Dragon Warrior, C’Thun Druid and a more Midrange version of Hunter. The fact we run these decks makes it so our opponents can do the same, meaning that heavier versions of Warrior such as Control and C’Thun starts being a liability instead of an advantage. That is why we cut them out in favor of Dragon Warrior – we won’t have instant losses against Hunters or Druids this way.

The Zoo build suffers a minor adjustment as well. Now that we aren’t going to be facing mirror matches, we won’t be fearing cards such as 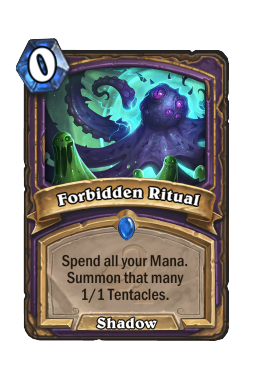 forbidden-ritual’s pesky 1/1s, meaning we can run things like

argent-horserider to have an edge in other matchups.

The banning of Zoo makes it so we can leave the

lightning-storm tech out of the Shaman, going back to the original build running

Both the C’Thun Druid and the Midrange Hunter are slower decks made to shine in the Mid game, meaning you have more options to deal with different types of strategies, and since we aren’t having to worry about Zoo anymore, we can set up to deal with both known strategies such as Warriors, Hunters, Druids, Shamans and the non-traditional builds we are bound to face in open tournaments. Note that despite these decks not having such an ok win rate against Shamans, the inconsistency of the Shaman class itself makes it so we don’t worry about the matchup very much, because the Shaman will often lose or win by itself regardless of how we built our decks.

And these are the cookie-cutter tournament builds! It took some time for me to put these together, but I think I finally managed to get the correct builds rolling! This was possible due to constant watching tournaments and running the numbers on matchups probabilities and such, I believe that by now most of the top Hearthstone players figured this out as well, but since we all know open tournaments aren’t (only) made of these players, it feels nice to have this information given to you guys!

I hope this article was fruitful, and I have to admit I can’t wait for a huge metagame shift that a new expansion brings, sure this metagame is magnificent, but change is always welcome in a game such as Hearthstone!

I love you guys, hope you enjoyed this article, we’ll see each other again soon!