Yogg Druid is one of the most consistent decks in the current game and an excellent deck for grinding the ladder. As a result, when playing it you should know the best way to beat some of the other popular decks around. One such list is Tempo Mage, a very fast, aggressively-slanted burn deck that can overpower a lot of decks. This guide will break down both decks and show the way Yogg Druid can use early removal and big threats to turn the game in their favor.

When playing Yogg Druid there are several routes you can take. While you have to run the solid token core to make the list work, there are a lot of fringe cards that you can freely tweak. Some lists cut back their ramp to make way for more draw, some lists lower their curve to fight back against aggro and some versions play more late game to beat control. You should always tweak the deck to fit the matchups you are facing the most at your current rank. Just make sure it is a list you understand. To help you understand Yogg Druid, a list has been posted on the side.

When facing against Mage you are going to assume they are tempo, which means you need to find your early removal. Ramp is going to be important to helping you get your threats onto the board, but your cannot let Mage run away with the first turns. They have a ton of strong cards that build really well and you need to find your removal as quickly as you can. 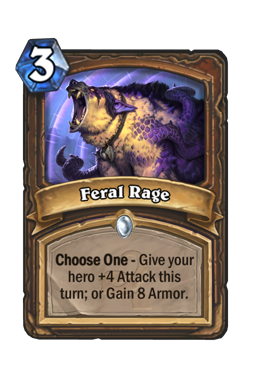 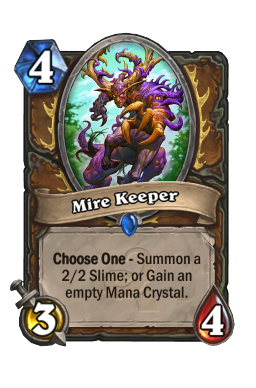 Tempo Mage is a very strong deck, but they only have so much damage. Not only that, but most of their damage also doubles as removal that they use to protect their minions and control the board. The goal of this game is to bait out that burn and slowly break down your opponent so they eventually do not have enough punch to finish you off. Tempo Mage is very hard to beat when they have a strong hand, but if you force out their burn and run them low on cards you should be able to take the game.

The other important part of this game is limiting the damage you take. Tempo Mage operates just like Shaman in that they want to start fast and then use that early damage to set up their later threats. If you are at fifteen when during the middle turns you are going to have play defensively and use your cards to contain the board. However, if you are twenty plus then you will most likely have priority.

As mentioned, the opening of this game is going to be about removing Mage’s minions as efficiently as you can. Every single card, from

Mana Wyrm to Sorcerer’s Apprentice, builds on spells. Those are the cards that are going to put you very low very quickly and you need to keep them in check as best you can. Do everything you can to control the board and use as many resources as you need.

Another big part of the early turns is making the best use of your ramp. A lot of the time you are going to have to use your removal during the first turns, but you also need to keep your mana crystals flowing. The way you evaluate if you should use removal or something like

Wild Growth is by seeing how much board you are going to give up and how much damage you will take.

For instance, if you are facing a

Flamewaker, you want to kill the waker because you are going to take a ton of damage. However, a 1/3

Mana Wyrm is not worth getting worked up about since you can freely remove it the turn after you ramp. On the other hand, a 3/3 Wyrm hiding behind

Mirror Images is worth killing.

Raven Idol should always be used as a spell to hunt for either removal or ramp.

The middle turns of the game are where you need to start to play your big threats and try to get Mage to use everything they have. This is not going to be easy, since most of their cards are very efficient, but if you slowly build big turn after big turn you can really start to control the pace of the game. This is a matchup where you generally want to just run out your minions so your opponent will have to answer them rather than add to the board.

Always try to set up or get value from

Fandral Staghelm. The four drop is very powerful and can rapidly swing a game but it is only going to live for one turn. You do not need to go all-in with it, but you do want to at least combine it with something like

Know how to use

Mire Keeper. Just as with the early dilemma between ramp or removal, using this to get a crystal or to add to the board can be a big decision. Getting two bodies is very strong against Mage and will often force them to use multiple spells to clear. However, ramping is invaluable and you still get a 3/3 for your troubles. Always see what an extra crystal bring you and then weigh that against the current board state.

The biggest card to watch out for

Flamewaker. The three-mana AOE is very good as ruining a board of tokens and will completely set back any tempo you gain. You need to try and at least bait one out before going all in. This is usually going to be done by taking half-turns where you make one or two tokens instead of three or four.

If you can you want to save

Azure Drake. These are the two biggest targets and you want to be ready for them when the time comes.

Note: If you have a weak hand it is usually right to use

Nourish to draw cards. If you have a strong or mana-intensive hand it is better to generate mana.

Once you make it through the middle game your whole focus should be on staying alive until you can get your larger threats down. Almost any huge trump card, from

Cenarius to Yogg-Saron, Hope’s End, is going to put you ahead and seal the deal. As a result, you want to be careful to protect your life to stay alive long enough to get them down.

When you get to the later turns against Tempo Mage you need to track the spells they have played and the burn they have left. This will help you know how careful you have to be and how much you want to use your hero power. One life may not seem like a big deal, but it can largely be the difference between winning and dying.

You really want to push during these turns to try and kill your opponent before they can draw into lethal or play their own Yogg-Saron, Hope’s End. Tempo Mage can rebound with card draw at any moment during a contest. Don’t get complacent just because you have the board or are ahead.

Look for damage wherever you can find it. Though you are going to start out on the back foot, your whole goal should be to become the aggressor. You are a token deck, which means you have a lot of ways to bring the pain. Hit your opponent and slowly chip away at their life as much as possible. Just don’t ignore their board to do it.