The most popular (and successful) Hunter deck these days is Camel Hunter. It is a very strong midrange list that has a very good matchup against almost every top-tier deck on ladder. One of those decks is Tempo Mage, the most popular version of Mage. You need to know how to take down Jaina and her army of spells if you want to climb. As such, this guide will look at the list and show you how Hunter uses its own for tempo to come out on top.

When building Camel Hunter it can be tempting just to play the stock 30 cards. That is not a bad strategy (the deck is quite strong on its own), but it is also important to note there are many directions you can take the deck in. As long as the core remains intact, you can play the midrange role as well as any list in the game. If you are seeing a lot of control you can add in more burst, if you are seeing aggro you can put in a secret package, and if you are facing midrange you can put in more threats. The choice is up to you. To help you figure out those tweaks, the original list has been linked below.

The rule for mulliganing against Mage is to find your curve. You need to play the tempo game better than they do to win this game. That is hard, but not impossible. Just look for all of your one and two drops and only keep threes with the coin. There are some fours that can be kept (as listed below), but you need to have a very strong curve before trying to keep anything that costs too much.

Desert Camel should always be kept with the coin.

Animal Companion is strong keep with the coin or an early curve.

Houndmaster is a good keep with the coin and a very strong opening. 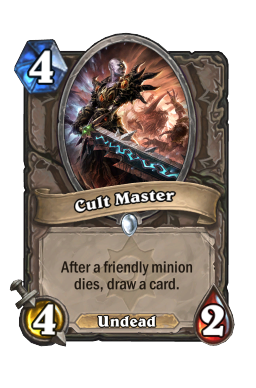 Cult Master can be kept with the coin and a minion with a low of low-cost minions.

As with any deck that has to play against Tempo, you need to meet them turn for turn at their own game. That is the only real way you are going to come out on top. That means trying your best to curve out as well as you can, and always being careful to keep something on the board. Mage is the type of deck that will just run you over if you have even one turn of nothing. Always try to play out minions, even if you can’t make use of their abilities. Getting something on board is better than doing nothing.

The other part of playing Mage is to count their damage potential, and always keep careful track of your life total. They are an tempo aggro deck in the same vein as Zoo, which means they have a lot of ways to do damage and a lot (a lot) of burst. You need to constantly be aware of the spells they are playing. This will help you know what their removal options are, and how careful you can be with your health as the game goes on. There is no reason to play around

Fireball if your opponent doesn’t have any left.

There is one rule of the early game: don’t let anything live. Tempo Mage is a deck that builds off of its own minions extremely well, which gives it the tools and pressure it uses to win. You need to always make sure they do not have a minion down, whether that is Sorcerer’s Apprentice,

Do your best to get use out of

Glaivezooka. The weapon does a good job of removing in itself, but it also is one of the few ways your smaller cards can trade up. You want to play the weapon early, as it gets much worse as the game progresses. Coining a two drop into glaive is one of the best ways to solidify early position.

Desert Camel is going to give them

Mana Wyrm. It is the only drop they have, and it can get out of hand very quickly if you aren’t properly prepared for it. That being said, if you have a strong board presence (or know you are going to get your double 2/4’s) then you can let them have the wyrm.

Play around their secrets.

Mad Scientist, which gives them 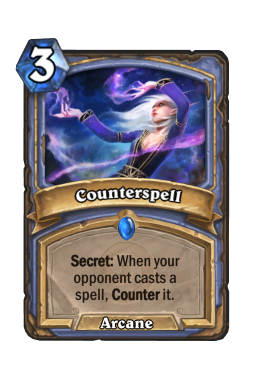 Counterspell, is one of their strongest opening cards. Counterspell is usually easy to play around (especially because most of your deck is minions), but you do not want to play the wrong minions into an entity. If they have a scientist you want to hold a small minion to trigger their secret when it comes.

Like any good midrange/aggro variant in today’s meta, Mage is going to scale up as best as they can. They run a lot of large minions, and they are all going to come down during the middle of the game. You play in the same style, which means you always want to try and be one step ahead. Do your best to clear and make way for your big minions the turn before they can play theirs.

Flamewaker. The three drop is easy to see as an early game tool, but it is largely a four through six drop. Mage likes to hold this back and then just spam a ton of spells to clear your board and stack up tons of damage. While you cannot stop that from happening, you can play around it by either holding back minions or making sure you have a strong board.

Always be thinking about

Cult Master. Mage is a deck that thrives on card advantage, but if you can keep the cards flowing you can out pace them. Cult Master your only real well of card draw. If you have a chance to get two, three or four cards out of even trades on the board, then you should take the chance more often than not.

Loatheb is very strong here. The five drop is very good at stopping your opponent from putting together lethal as well as setting up your own lethal, but it is also a great way to take control of the game. Tempo Mage relies on their spells to keep their momentum going, and slamming this down on turn five usually gives them a weak turn, which then builds into your turn six.

Savannah Highmane is almost always the right play if you are not being swarmed down. While it is right to have a tendency to be conservative, if you have a chance to play the lion, do so. Not only does it trade well into just about every minion Mage has, but it is going to take them a lot of cards to remove it.

Don’t be afraid to use Hunter’s Mark during these turns. Yes, Mage does have some really big minions, but there is no reason to save the removal if you can get way ahead on a clear board now.

If the end of the game is even, you and your opponent are going to be trading blows; putting down a minion and seeing how the other reacts. In that case, you just want to fill up the board with as many threats as you can. However, if you are low on life, you need to do your best to clear everything your opponent plays and keep your life as high as possible.

Flamestrike is extremely rare these days. As such, you don’t need to live in fear of it at the end of the game. While there is no reason to over-extend if you are already ahead, don’t try to hold back if you need to catch up or are even.

It is important to note that most Mages will not know that you do not have the traditional Hunter burst. This means you can make attacks or plays that will cause them to play reactively and keep you in control. Going face and bluffing

Kill Command can be a good way to get an extra turn.

Always look for lethal. Obvious, but it can be very easy to ignore potential kills in a game of back-and-forth like this one. When you have a game of minions, you can miss two turn lethals or setting up kills with your hero power. Mage has no healing. If you have a chance to push you should take it.