So the most talked subject lately has been how terrible Priest is and how Blizzard supposedly did absolutely nothing to make Priests better.

I have seen thousands and thousands of rant: youtube videos, reddit posts, forum posts, and lots of other things all relating to how much 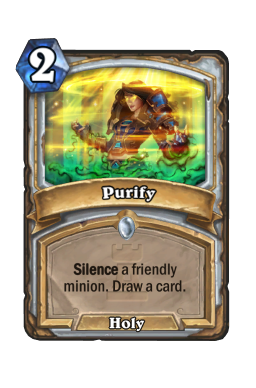 purify sucks and how Blizzard failed miserably in this expansion towards the Priest class.

Well, I am here today to discuss, POSITIVELY, the expansion when it comes to Priest, because I figured – Hey, it may not be that bad!

There is something relating Blizzard and obvious decks that I started to get it now: They kinda hate obvious stuff. And giving Priest obvious OP Cards maybe isn’t the way to go. Ok, they did exactly that with Shamans and even then they had to do it 3 times in roll to finally make the class viable, so people kind of expected that from Priests.

Let’s remember, and notice, that the best decks in the game right now, all of them, were only discovered towards the end of the expansion:

So I like to think that Blizzard kind of expects this, they don’t want the best decks to be obvious – they want people to find them out. That’s why they didn’t want to release obvious overpowered cards for Priests.

Sure, their decision might have been wrong, or terrible, or bad, but after some thinking tonight I came to the conclusion that maybe, just maybe, the Priest class has a powerful deck that people haven’t realized yet, but somehow will appear once the expansion finishes releasing: Dragon Priest.

I made some tinkering and I came to the conclusion that Dragon Priest actually got SIX CARDS this expansion. Do you know what happens to a deck when it gets 6 new cards added to it in one single expansion?

Sure, in the end those cards might not fix the class, but I believe it is just way too early to say that the class is dead, or even that these cards won’t fix it! I might have raged a lot in my reviews because of the Priest class cards that were shown to us, but after I cooled down (I actually only cooled down today), I thought about the following:

So, there we have it: 6 completely new cards that are auto-included level of super good that we are adding to our Dragon Priest deck!

I don’t know about you guys, but I started to have some high hopes regarding Dragon Priest in this expansion, and it might be the first deck I am going to playtest once I have access to all the cards.

Now, the list showcased here is the initial playtesting build – A lot of proactive plays with double

entomb to basically win every Control match out there.

The only thing really missing here is the 3-drop curve, but the extra 4-drops we got kind of got the 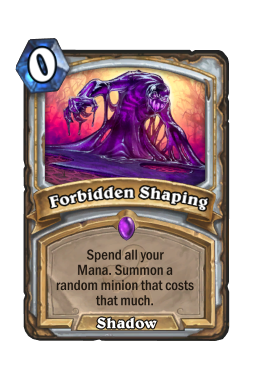 forbidden-shaping somehow fix the 3-drop issue (since the 3-drop Shaping is one of the best ones in the game) while being a lot more relevant later in the game as an 8-drop or something.

So, as I said multiple times in this article – It is too early to discard Priest’s viability.

Blizzard didn’t discarded Priest, they thought about everything that was posted here. Sure, Purify sucks, but the class still got quite a lot of cards that we haven’t discussed as much.

If you’re an old time reader of Hearthstoneplayers, you already know how much I love Priest – I have over 1500 wins with the class, I played so much Priest and it’s still my favorite class, therefore I don’t want to see it dead.

Don’t give up hope yet, the class might still be alive!