Hi! I’m Asmodeus, multiple times Legend and infinite arena player. I’m also the author of The Complete Guide for Hearthstone Player. Welcome to the second part of heroic League of Explorers guide where I share with you simple methods of defeating the heroic encounters. This guide will include videos, decklist and strategies to complete the Uldaman wing.

Just like in the previous part, you don’t need the exact same deck to win and I’ll be giving you the ideas behind them so that you can understand how to exactly beat every boss. In each video you’ll see me defeat the boss with provided decklists and you can just follow along or use the general strategy to build your own version of the deck.

The second wing – Uldaman consists of three encounters. Chieftain Scarvash, the crazy Mine Cart Rush and Archaedas. You can use the same decks to beat the normal mode as well.

Chieftain Scarvash can be a tough boss to defeat due to very constricting rules of this encounter. You can use your minions on turns 2, 4, 6 and so on, and you can use your spells on turns 1, 3, 5 etc. Weapons are not affected. This means that you can’t easily combo things such as

circle-of-healing. Which is why it’s best to just pick a class with good selection of spells that have an odd mana cost and minions that have an even mana cost. Hunter or Shaman are great choices. Getting a good start is pretty important, but even then you’re bound to take some damage, so make sure to include healing in your deck.

Since you start with a big board disadvantage, your main priority should be to stabilize and once you’re ahead on the board you can close the game out quickly since Scarvash doesn’t use any swing cards, it’s just a brute force that you have to overcome.

Mine Cart Rush a.k.a The Mine Shaft is another interesting encounter where you have to survive until the turn counter reaches 0. To do that you’ll have to utilize cards unique to this battle. Start off by drawing as many cards as you can before there is too many enemies on the board. Your goal is to stall and balance the incoming damage. Try to save your AoE and use it only as a last resort. Use the 10 damage card on highest attack minion and survive with taunts and heals as long as you can. Once you have one or two “Barrel Forward” cards you can use them to immediately end the encounter by reducing the turn counter to 0. You’ll see me doing this at the end of the video above.

Archaedas is a pretty weird guy. He likes statues and secrets. Every turn you’ll get a 0 attack minion which you can utilize by buffing it’s attack value. Shaman or Druid are good choices here. I went with Shaman mostly because of

flametongue-totem. Make sure you’re clearing the board because Archaedas can use a Shattering Spree spell that destroys ALL statues and deals 3 damage for each statue destroyed. This spell can literally one shot your hero, so be careful. You should also remember that he plays a paladin secret 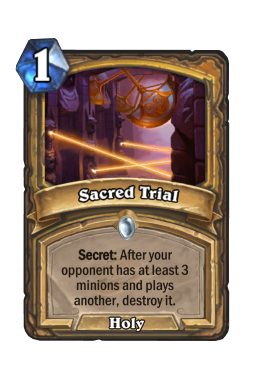 sacred-trial, so try to not walk right into it like I do in the video! The longer you go the easier it will be to clear his board and build up your own and once you get enough damage in, you can finish the boss off with a big

bloodlust for the win.

Using these or similar decks you should have no trouble at all defeating every encounter in heroic Uldaman. Show those filthy Troggs who’s the boss and check back soon for the next part of heroic League of Explorers guide.