For the public deck guide on the general strategy of this deck, check it out here. This is Part 2 of the guide where we drill down to matchup analysis and mulligans for Face Hunter.

On ladder, I will never have trouble with Mech Shaman. The main strategy of their deck is to swarm and gain early board control, and then follow that up with a substantial amount of damage to the face. This is effective against decks that are perceived to be slower than it. However, against decks like Face Hunter, they have to constantly deal with your board, while you just go for face damage. As long as you can efficient deal with their 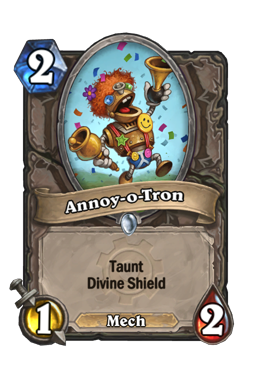 Annoy-o-Tron, you should be fine.

If their board does indeed start to become menacing, Explosive Trap can always be used to bail you out. Most of their minions do have more than 2 health points, but if they are prioritizing board control and trading, their minions will not be at full health when they run into your trap. Even if you do not have Explosive Trap, Unleash the Hounds will always provide a decent comeback mechanic when you are in trouble.

Their inability to heal your damage is what makes this matchup so in favor of the Face Hunter. They simply cannot deal with your deck strategy. I would say 70/30 is about the percentages. This is clearly the Face Hunter’s game to lose. The lack of

Lightning-Storm to clear your board is one of their biggest weaknesses that the Face Hunter player can exploit.

I have never had too much trouble with Grim Patron Warrior. Many of their huge plays come after turn 5 because it usually revolves around their key card of

Grim-Patron. Most of the time, the game is over much earlier because of the enormous amounts of damage that the Face Hunter inflicts.

Armorsmith. They will most likely mulligan for this specific card, but even that is not too efficient against the Face Hunter. There is simply no way for the Grim Patron Warrior to obtain additional points of health. They can hero power, but that prevents them from contesting the board. They cheap removal methods such as

Execute are not at all effective against any of your minions.

Just try to rush down the Grim Patron Warrior and they will lack the answers or initiative to fight back. This is a much better matchup than Control Warrior. This meta revolves around this deck and Face Hunter is a solid counter to many of the plays that they do indeed have. Even Fiery Win Axe does very little to deter your initial aggression.

Face Hunter simply dumps the Druid matchup. They have to have either

Wrath to even contest your board. If they lack one of these two answers, you will be getting in consistent damage.

Sure, the Druid player can use his hero power to take out your Leper Gnome or Wolfrider. However, they still have to face tank the damage and it is not all too wise to do so. The Druid can taunt up, but that is why you have Ironbeak Owl to counteract this. Simply, the Druid’s win conditions cannot be reached before you burst them down. For them, keeping

Wild-Growth will oftentimes prove to be very detrimental to their strategy.

This matchup is very UNFAVOR for the Face Hunter player. Several of the cards, in fact many of the Rogue’s cards are meant to deal with your early aggression. A simple

Backstab can kill any early drop that you play minus Argent Squire. A

Fan-of-Knives will oftentimes completely wipe your board AND offer them a draw.

Just when you think you have the Oil Rogue in your crosshairs for lethal, they will most likely have and play

Antique-Healbot and crush your dreams. They can oftentimes race you with cards like

Eviscerate to deal massive amounts of damage back to you while maintaining their board. Simply the Oil Rogue matchup is one that gives me nightmares. Besides Control Warrior, I think this may be one of the more unfavorable ones.

I will oftentimes not have too much trouble dealing with Demon Zoo. For one, Flame Imp is their early drop which actually deals 3 damage to their face and helps you achieve your win condition. The other aspect is that many of their win conditions can be easily counteracted with yours. Zoo seeks to obtain large amounts of board control.

Two of your cards; Unleash the Hounds and Explosive Trap will explicitly serve to counter this line of play. Demon Zoo is not at all favored in this matchup. When you see a lot of Demon Zoo on the ladder, one of the easiest ways to take advantage is to queue using Face Hunter. Besides

Defender-of-Argus, Zoo also has no innate ways to taunt their minions. This should be a free win when encountered with this deck.

The general mulligan strategy for Face Hunter is to have the best initial mana curve as possible. You want to be hitting your 1-2-3-4 drops and consistently deal damage early. The early damage is what can be pushed later for an easy win.

If you are playing first and do not have the coin, aggressively mulligan for Leper Gnome and Argent Squire. These card are crucial for early face damage and in the early fight for the board. They will contest everything up until the 2 mana point. Be sure to get as many minions as possible to continually deal more damage to the opponent. Cards like Abusive Sergeant will be useful for trading if it ever comes that to that too.

If you are going second and have the coin, aggressively mulligan for 2 drops, as the coin provides an ability to snowball your damage early with a 2 drop. Having coin allows the Face Hunter player to go for a multitude of early minions. You can go 1 mana into 3 mana or 2 mana into 2 mana with regards to your first two turns.

Specific mulligan strategy for each class is discussed below.