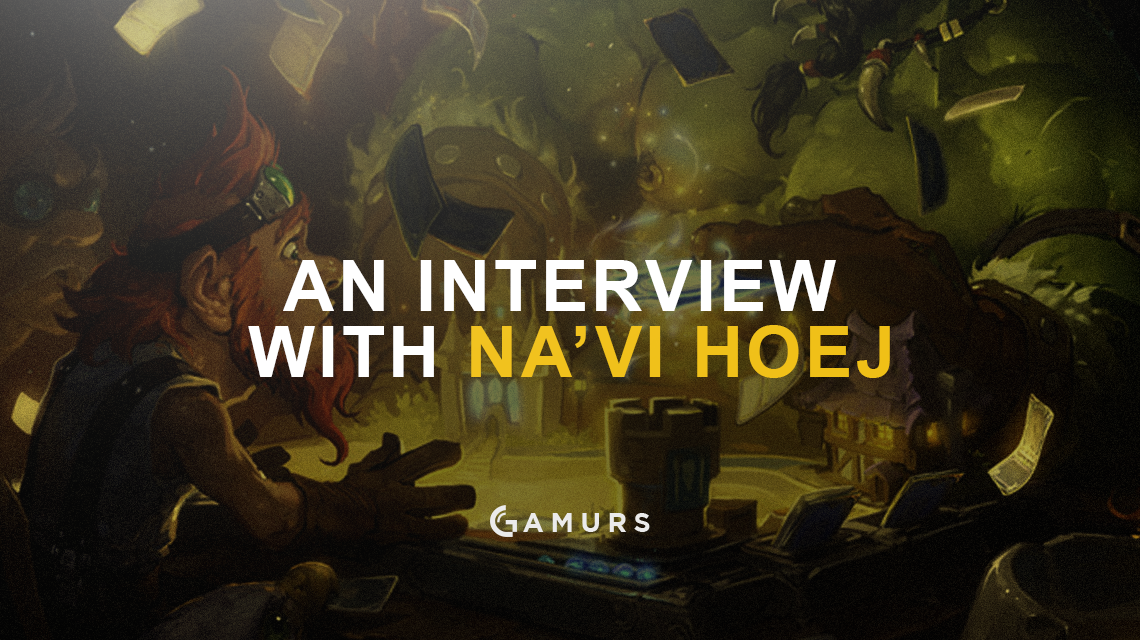 Frederik “Hoej” Nielsen is one ofthe coolest and most talented players in the Hearthstone scene. Inthis interview, he shares with us his vision of Hearthstone, aswell as his future plans. Let’s get to know him better.

— We had a small introduction about you, but couldyou tell us a bit more about yourself?

— Yea, I started playing Hearthstone professionally lastyear when I got my first breakthrough in Viagame #2 but I alsoplayed for some smaller teams. We actually have been workingtogether before I joined Na`Vi, in a small team called Mythic withonly Danish players, but yeah, the biggest breakthrough was when Iwon Viagame #2. When I won this event, I thought “If I canwin this event, I can probably also win more events,” so Istarted trying harder and it worked out. I’m also a littleknown for having my little budgie Pidgey on my shoulder when I playonline tournaments. She has Na`Vi colours, yellow-black, so she wasmeant for Na`Vi.

— Does your BattleTag have any special meaning orsignificance?

— My BattleTag is Hoej and it’s actually my middlename so it doesn’t really have any special meaning orsignificance but I didn’t expect I would ever go pro inHearthstone. If I knew I would go pro, I would probably have acooler BattleTag like Kappa123 or BabyRage or something funny thatthe chat would react to.

— You told us a bit how you got into competitiveHearthstone but how did you pick Hearthstone from start after all?What do you like most about it?

— I’ve always liked strategy games and card games,so when Hearthstone came out, I just fell in love with it. In thebeginning, I only played arena and I played a lot of it; there wereso many different combos and everything was new back then, so Iliked to try everything, try making cool decks and I watched a lotof streams. I still find Hearthstone funny today, just in adifferent way because now it’s all about breaking the meta,do well on ladder and win tournaments, but back then, everythingwas new, so it was so funny because so many strategies were notfigured out and so on.

— How do you approach each season, and whatstrategies do you use to climb your way to the top of therankings?

— When I start a new season, I play online cups to grabHCT points, which you can use to qualify for prelims, and you canalso use on Last Call, so instead of grinding the ladder, I playonline cups early on. Then in the middle of the season, I start togrind the ladder to legend, mostly with fun decks, because thegrind to legend takes a lot of time, so if you don’t have funwhile climbing, it’s a long run and when I hit legend, Istart playing more focused and start playing good decks to hit highlegend.

— What style of decks do you prefer playing? Doyou enjoy the current meta?

— I mostly play control decks; my signature deck isRenolock, but I also like all control decks, like Control Warrior,in general. But when I started playing Hearthstone professionally,I only played aggro decks, so I actually transitioned from being anaggro player to a more control player and the reason for that isthat I believe control decks require more skill and aggro decksreally rely on topdecks, so I prefer to play control decks. Aboutthe meta, I think it is okay right now. It has been worse; thereare a lot of Dragon Warriors, Yogg Druids and Face Shamans onladder but you can beat those decks with control. However, I thinkit is nice that we get a new expansion right now so we can see somedifferent decks, but I think the meta is fine, even thoughI’d like some different decks.

— You are in charge of making some changes inHearthstone. What would you change?

— Oh, that’s a really good question. I’dprobably change a few cards like Tuskarr Totemic and Yogg-Saronbecause they are really RNG-heavy and it’s not healthy forcompetitive gaming. But if I worked for Blizzard, I would makethose holographs, like in The International in DotA, with theheroes pick and rates, and at BlizzCon, the biggest Hearthstonetournament, when you play a card they could show some holographsand stuff. That would be really awesome to watch. I think i wouldspend a lot of money to make this work, for the big tournaments atleast.

— So, tournament-wise, even though you are alwaysone of the favourites to win a tour, most of the times luck is noton your side, and so we do not see you in as many finals as wewould like to. Do you also feel that way?

— Well yeah, I wish I could get to more finals butHearthstone is not like Poker in some way. Let’s say you gottwo Aces and one guy calls you with two Fives and on the riverthere will be a five, so you lose with the aces. Does that mean itwas wrong to go all-in with the aces? No, it’s just unlucky,but if the guy that went all-in with the aces keeps making goodplays, he would win way more, and the same goes forHearthstone.

That’s why ladder is a really good way to show goodHearthstone players because you can play a million games on legendladder to get your final win rate, while in tournaments,you don’t have the same amount of games; sometimes you onlyhave one or two lives and if you roll low on Tuskarr Totemic, forexample, or if the other guy gets a topdeck, he wins. It’slike you can play perfect Hearthstone and still lose, but if youplay consistently well, you will win tournaments in the long run.So I’d rather focus on doing well and that’s the bestthing I can do. Normally, I finish good on ladder and I get a lotof points, so I will hopefully win a tournament this year.

— What are your goals for Hearthstone thisyear?

— I had some goals when I went into 2016. The first goalwas to go to all the prelims to get enough points for the Last Calltournament, which is the people who get the most points throughoutthe year on Europe and right now I’m in the third position toget to that spot. My second goal was to win a Major, and it’sstill my goal, I was really close at DreamHack Summer in Swedenwhere I finished third/fourth place out of like 200, so I wasreally annoyed that I lost so close to a final but I can still winBlizzCon. I know it’s gonna be hard but I wish I can do that.And my third goal when I went into this year was to be on top-fiveon GosuGamers throughout the whole year, having a consistent winrate on tournaments and I have also done that, so I just need towin a Major and I’m happy for this year. I really hope itwill be BlizzCon, back to back for Na`Vi it would be great.

— Do you have any advice or thoughts you’dlike to share with your fans or other aspiring competitiveplayers?

— It’s really difficult to get into the competitivescene in Hearthstone but the best way to do it is to play a lot ofladder and a lot of online cups, because the best way to get intothe scene is to win one of the prelims, the Summer/Winter or theSpring prelim, so try to get all the points you can get. If youfinish consistently high on ladder, some people will notice you atsome point and be like “wow this guy gotta be good since hecan finish high on ladder” and then pro players will add you,like asking for advice and so on, so yeah, try to do well and atsome point you will get pro.

— Ok we can wrap it up. Any finalshoutouts?

— Yeah, I wanna give a shoutout to Na`Vi, to my teammatesXixo, Ostkaka and Surrender, to my manager kimi and then to all thefans I have and to my family and so on. Also, can’t forgetPidgey!