Welcome to Part 3 of my GvG card review since Blizzcon! If you’re not caught up, here’s Part 1 and Part 2.

Since I started writing this article, there has been a veritable deluge of cards to review since the December 2nd release of new cards. I’m going to try and review them all before the actual release, so stay tuned.

Are you ready for Goblins vs Gnomes? 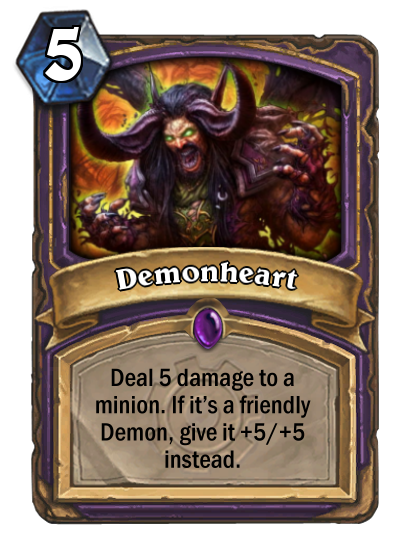 This card is a bit underwhelming. It doesn’t have particularly incredible effects and also doesn’t fit into any competitive Warlock archetypes so far.

It is essentially a 5 mana version of demonfire and that card is barely played because it hits a bit too weakly for 2 mana and the buff just isn’t as easy to pull off because of a lack of really good demons.

The hope is that more demons get released for synergy with the Warlock class, but even then, Demonheart is a more expensive version of blessing-of-kings and that’s not often played.

In arena, it’s mediocre. If you choose to deal damage, it’s a single target starfall which is really not that good especially since Warlock already has access to shadowbolt.

I’m not a huge fan, and it isn’t likely to make a splash. The card art is amazing though, so if you’re a collector, getting one of these would be cool. 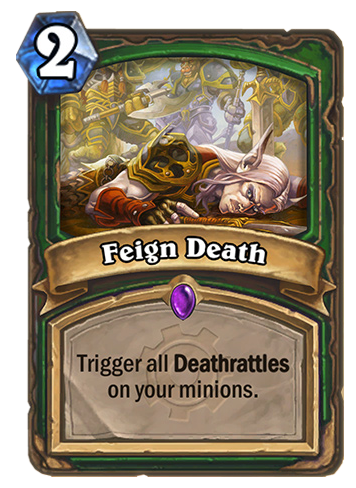 I honestly think the hype for this card is unwarranted. Its closest comparison is reincarnate and that hasn’t exactly changed the competitive scene.

Admittedly, the prospect of being able to trigger your own Deathrattles without actually having to do the ‘dying’ part is great and there are plenty of dream scenarios.

However, the reality is that Hearthstone doesn’t afford you the time to do so. If as a Hunter you have more than 3 minions out with Deathrattle when it’s your turn, you’ve effectively won already. Most of the time you can only trigger one Battlecry and most of those yield limited rewards.

Feign Death is a win more card as Deathrattles rarely have game-deciding moments except for say sylvanas-windrunner.

This card is not meant for the streamlined machine of the current Hunteraker but rather a control deck which is what Blizzard is pushing with the introduction of Call Pet and Gahz’rilla.

Time will tell whether this push is enough to make Control Hunter viable, but this card opens up some amazing possibilities for the class. 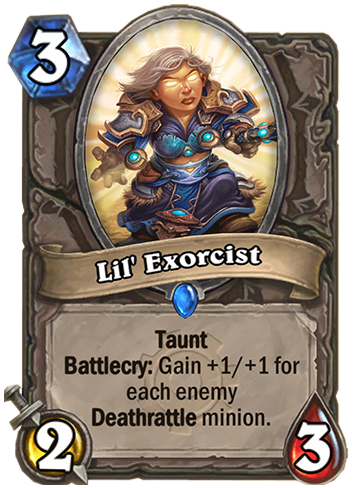 This card is pretty good. It has taunt which makes it perfect for anti-aggro against Undertaker decks. It’s also fairly costed, and although understatted at 2/3 for 3, its effect isn’t hard to trigger.

Without grabbing a Deathrattle, the Exorcist doesn’t have much use, but I stand by my belief that the Deathrattle meta is here to stay. Reason being that stickiness on the board has been consistently strong in Hearthstone dating back to the most basic harvest-golem.

There are also more Deathrattle minions being released like the Piloted minions which are excellent at adding durability to the board.

This means that the Exorcist will always have a target, and even if it gets just 1 boost, a 3/4 taunt minion for 3 is great against the early game rush. This card I feel will try to wrest away the deathlord spot in anti-aggro decks except it’s better and more consistent.

What makes it good in constructed is its weakness in arena. The more random battles in arena means there are fewer Deathrattle cards and thereby makes Lil’ Exorcist a tauren-warrior which is a notoriously weak value pick. 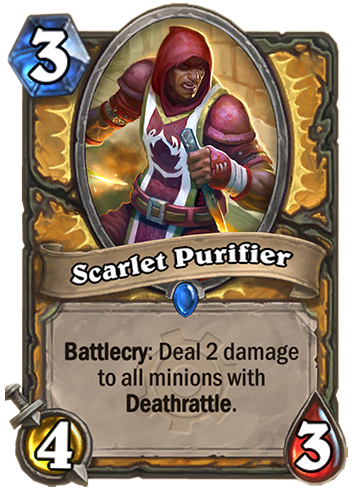 I’m a big fan of this card. Yes it hurts all Deathrattle minions including your own, but you get to control when it gets played, and thus can setup situations in your favor.

Reiterating what I said earlier for the Exorcist, I believe Deathrattle minions are still going to be some of the strongest and most popular minions out there because of their durability; and this card punishes them.

Two damage to all Deathrattle minions is a fantastic ability and kills off almost all the 2 and 1 drop minions instantly. The only problematic Deathrattle card in the game is nerubian-egg, but this can even be turned into an advantage by playing Eggs of your own.

To cap it off, the Purifier has above average base stats for a 3 mana minion at 4/3. It’s a shame it’s a Paladin class specific, but within those decks, unless there’s a big shift away from Deathrattles, this should be an easy fit in any Paladin constructed deck.

In arena, this is a good card simply for the stats alone, and its Battlecry isn’t entirely useless either although more difficult to get value out of.

The only worry for the Purifier is that it’s now directly competing with the other new Paladin cards from GvG in Coghammer and Muster for Battle.

However, I believe this card is better than both in this metagame and will soon establish Paladin as a counter deck to aggressive Deathrattle decks. 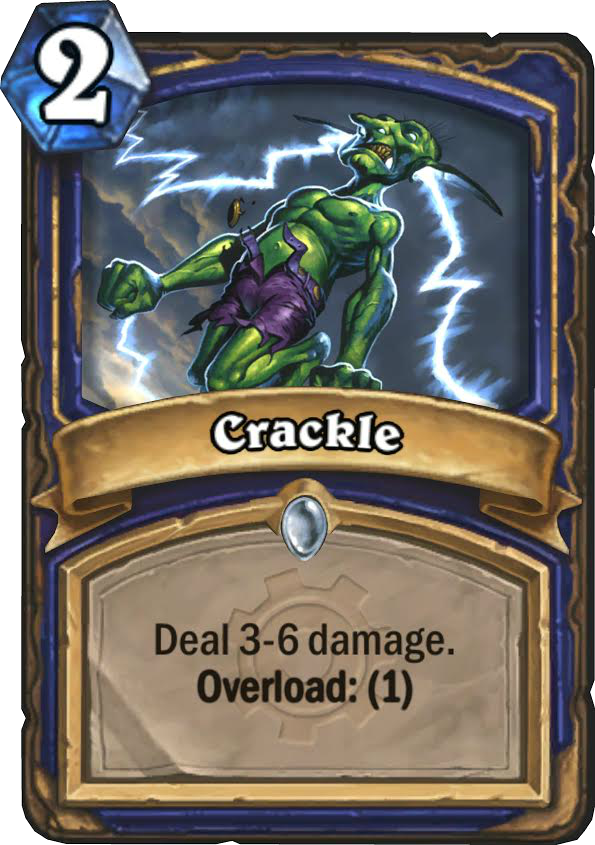 It looks like a super infuriating card, but it’s actually got a decent amount of kick and averages 4.5 damage which is closer to lava-burst than lightning-bolt.

Using it hoping for a fireball is a bit optimistic, but 2 mana isn’t a huge commitment and can generate fantastic tempo.

As always, people can complain about RNG, but you can control it through Spell power. I think it’s a great fit in bursty Shaman decks and gives them yet another good way to deal with that early undertaker.

In arena, it’s also solid and up there in terms of class picks at Common rarity.

Nothing too exciting here, but this is more RNG than most which adds a bit of excitement and frustration. 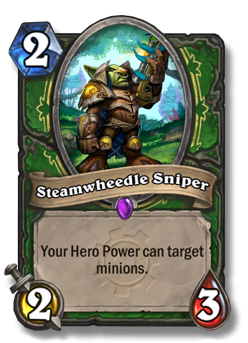 Welcome to the new wave of Control Hunter! This card gives an effect not unlike the auchenai-soulpriest. It has fewer synergies with the rest of Hunter’s repertoire, but it also enables a class like Hunter to control the board where it couldn’t do so before.

The card I compare this most closely to is keeper-of-the-grove. You don’t want to be playing this card without access to your Hero Power so waiting until at least turn 4 is ideal.

Its stats as a 2 mana minion are perfectly respectable, but it’s not a true 2 drop except in arena. Saving this so you can get value out of its card text is crucial.

I also like its reliability. This card does exactly what you want from it and that’s really good in an RNG heavy expansion. I don’t think it fits any current Hunter archetypes, but it could well be the building blocks for a new one. 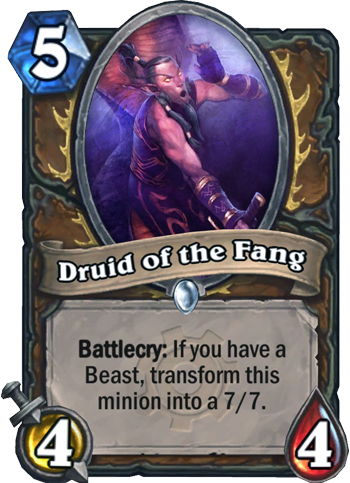 Druid of the Fang

This is a very strange card to come out but it has potential since Blizzard revealed that druid-of-the-claws formes are going to be classed as beasts in the expansion.

That said, there aren’t many beasts run in Druid decks, and this card will take a lot of building around. The good news, is that it ‘transforms’ into a 7/7 which means it can’t be silenced down to a 4/4.

The problem with Druid of the Fang, is its need for a beast. Without a beast, it’s a terrible 4/4 for 5 mana and that’s just not good enough. Couple this with the fact that Druid has so many strong options at the 5 cost slot and this really dictates a shift in style.

In arena, this is below average because relying on beast synergy is very unwieldy and a 5 mana 4/4 is just not acceptable. 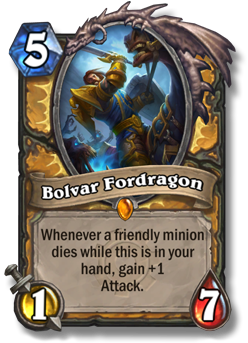 And Paladin was doing so well… This card is an utter disappointment. I’m actually in the process of building a new age Paladin deck and even left a spot in the deck hoping that this card could be the one to fill it.

But after seeing it and taking some time to think about it, this card is just not good. It can be silenced, it’s terrible to top deck, and doesn’t have an impact when it hits the board.

It desperately needs a secondary trait like Divine Shield or Taunt (Charge would make this too powerful) but as is, there is actually just no reason to play Bolvar.

At best, he’s a 5 mana boulderfist-ogre at worst, he’s either a mogushan-warden without Taunt or BGH/Silence bait.

He’s better in arena; but not by much. The 5 drop slot has become one of the most competitive overall and this card just isn’t good enough. I really wish I will be proven wrong, but alas, in its current state, Bolvar is simply unplayable competitively. 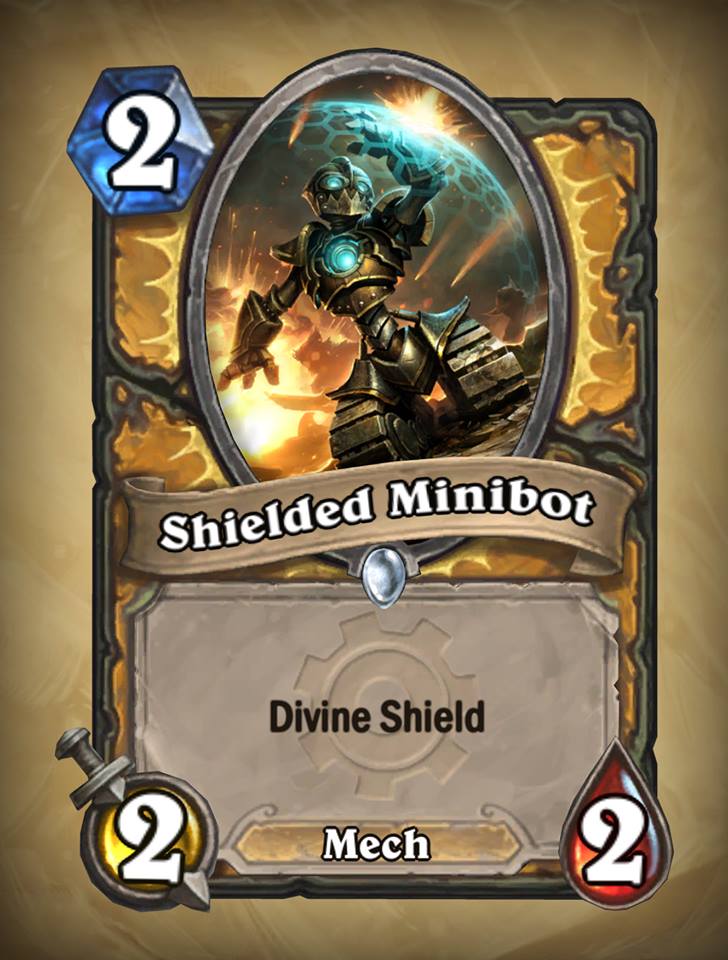 This card is surprisingly sticky and annoying. A 2/2 with Divine Shield trades favorably with a whole host of other two and one drops.

The problem I see, is that it runs into what I perceive to be Paladin’s new weakness and that is 2 atk early game when facing down 3 health minions.

This only trades 1/1 with a 2/3  and beats out a 1/3 over two turns. northshire-cleric can draw Priest a card in that time, Warlock can continue to swarm after voidwalker tanks a hit, and Paladin doesn’t have good enough catchup mechanics.

This card is an arena all-star though. The slower metagame and durability of this card will see it trade favorably most of the time and give you a good board presence right from the start.

It’s also a big bonus that it’s a Mech and can get a lot out of potential synergies. Big blood-knight alert though! 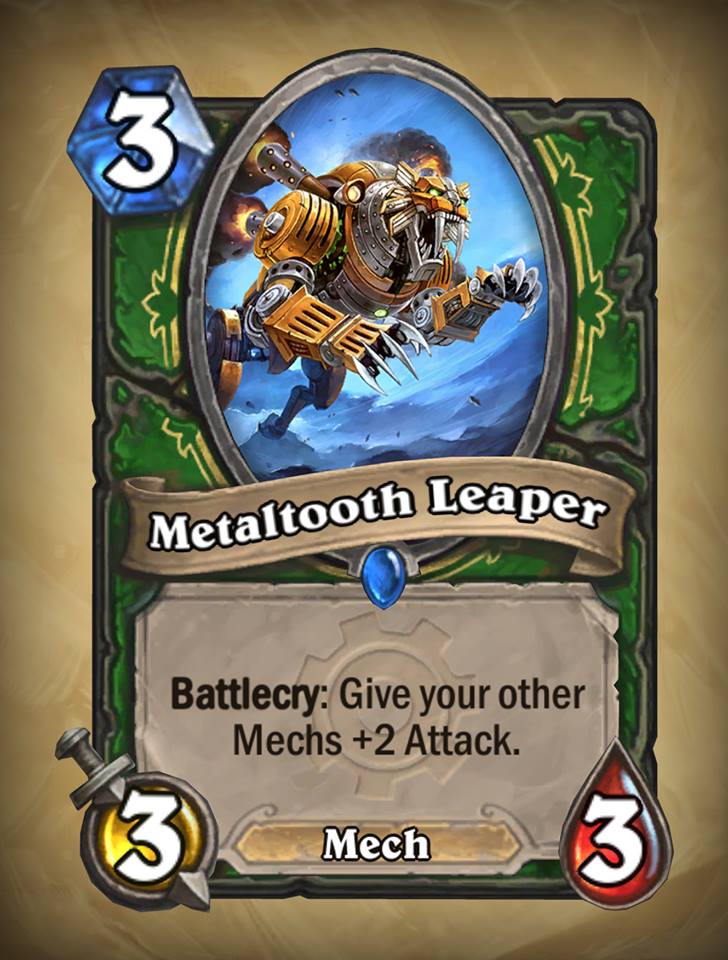 +2 attack is absolutely fantastic when applied to one minion since it can instantly start trading up. When this bonus is applied to all Mechs, it’s incredible.

There are a number of super tough to remove Mechs like annoy-o-tron, and as a result it’s pretty easy to build up a board of Mechs that can’t be removed by turn 3.

Once this hits the board, your board presence and power is increased immediately if you have even just one Mech on the field. Furthermore, it’s got a more than respectable 3 mana for 3/3 worth of stats so it’s playable even without triggering its Battlecry.

This card is fantastic and will be good in arena too. Obviously it gets noticeably better with the presence of Mechs, but as a 3 mana 3/3, it’s pretty valuable in its own right.

Some really strong class cards are being revealed here. It looks like Blizzard wants to give specific classes tools to stay relevant in the metagame rather than simply add to the pool.

Cards like Metaltooth Leaper and Druid of the Fang actively encourage new deck archetypes while bringing insane value. Others like Scarlet Purifier aim to shore up a class’ weaknesses.

And then the big disappointment of Bolvar Fordragon… I’d rather not talk about it!

Part 4 is gonna be here in a flash! Keep your eye out!