Gallon on joining Hearthstone Grandmasters: “I don’t think I would say that I totally deserve it just yet” 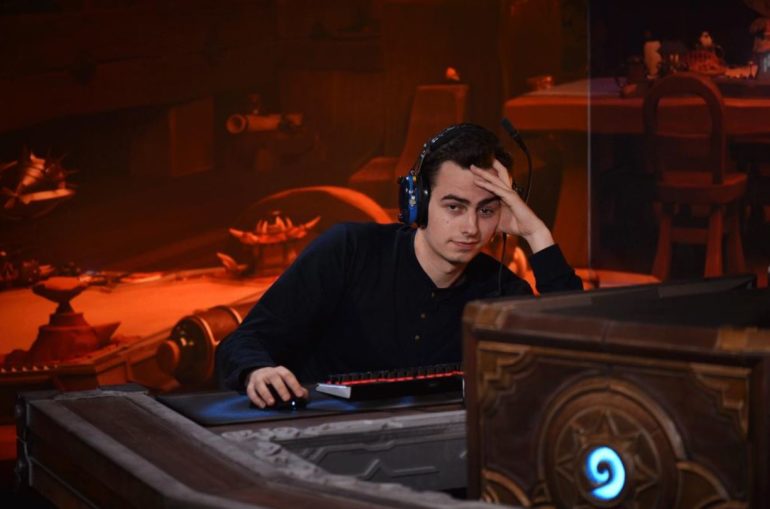 Edward “Gallon” Goodwin is arguably one of the best Hearthstone players in the United States.

Gallon lost first place at Masters Tour Las Vegas to Hearthstone competitor David “Dog” Caero. Going into the game, the broadcast team remarked about how terrible the deck matchup was for Gallon. Though the game ultimately didn’t play out in his favor, Gallon still managed to win a round before losing the match 3-1.

Like many who play Hearthstone, Gallon discovered his love of card games while in high school. After becoming familiar with the genre through other TCGs, Gallon eventually discovered Hearthstone. Not only did Gallon love Hearthstone, but he was also incredibly good at it. Dot Esports talked with Gallon about competitive Hearthstone, the Grandmasters program, and what he’s looking forward to most about Saviors of Uldum.

What has been your favorite deck to play during Rise of Shadows?

Gallon: At the start of the expansion I really enjoyed Rogue. I hit rank one Legend on day one of the expansion with a deck that was running a bunch of the new cards like EVIL Miscreant, Henchclan Burglar, Vendetta, and stuff like that. Then that got nerfed, which was kind of upsetting, but I think it also made a couple of other decks playable. Recently, I’ve been playing Cyclone Mage and having a lot of fun with that deck. I think it is super hard, but also super rewarding if you can play it well. I like decks where there are a ton of decisions to make and if you make the right ones, you win way more often than your opponent does.

How long have you been trying to play Hearthstone at a competitive level?

I think I just hit my three-year mark from the first big tournament that I entered. Spring 2016 was the first large LAN tournament I ended up playing in. What happened was I had been watching competitive Hearthstone for a while but I’d never really dipped my feet into it past getting Legend every month. I saw someone at Winter Playoffs doing super well with four decks I knew how to play and it was like holy cow… I can actually play in a tournament.

What does getting the recognition of Hearthstone Grandmaster mean to you?

I don’t think I would say that I totally deserve it just yet. The two goals that are really important in Hearthstone, at least to me, are A) Win a large tournament, which I haven’t done yet. And B) qualify for worlds, which I haven’t done yet. If I do either of those things, I think I’ll feel like I deserve it, but for now, I still haven’t hit my personal goals in terms of competitive play.

How do you think the competitive Hearthstone experience you’ve had so far will prepare you for Grandmasters?

Last year was my first year of playing full-time. I went to a lot of tournaments in North America. I also went to a tournament in Sweden last year and then one in China at the beginning of this year. Last year, I had the experience of competing against the top players a tremendous amount. That system was one where all the top players, go to every single event, so you’re bound to run into one or two of them at any event you go to. So nervousness wise, I’m not worried about it. I’ve played against and beaten these guys before. I look at it like it’s just another tournament series. The players are very good, but there are still things you can capitalize on against them. Just because they’re good, doesn’t mean they’re perfect, so in terms of that, I’m not too worried.

What are you looking forward to about Savors of Uldum?

There are so many cards I’m looking forward to. It seems like everything I’ve seen so far has just been bananas. They’re really good cards. The new four-mana 2/7 for Priest looks nuts (High Priest Amet). Sir Finley is really powerful. So this is the problem with designing cards like [Finley]. They’re kind of like power spike cards.

You’re limiting your decklist to make individual cards better because it’s like a different strategy, so they want to reward those unique strategies. You have to make power spike cards powerful enough that you want to play the deck, but not so powerful that the deck is entirely based around drawing that specific card. You don’t want the gameplan to be if I draw this card, I win; if I don’t draw this card, I lose because that isn’t a fun mechanic.

Of the explorers, I think Sir Finley is kind of the one that is the most ‘If I draw this early, I win; if I don’t, I lose’ type card. Sir Finley, I’m not too excited about, I don’t really want that card to be good, but the other explorers I think are pretty cool. I think Reno isn’t like super powerful enough to where if you get it you just win the game, but it’s still powerful enough to build a deck around. Same thing for Brann, and then Elise is like a really interesting combo card.

If you want to stay up to date with Gallon, you can follow him his twitter account seen above. Check out the cards Gallon and fellow Grandmasters will be playing with later this year when Saviors of Uldum goes live on Aug. 6.