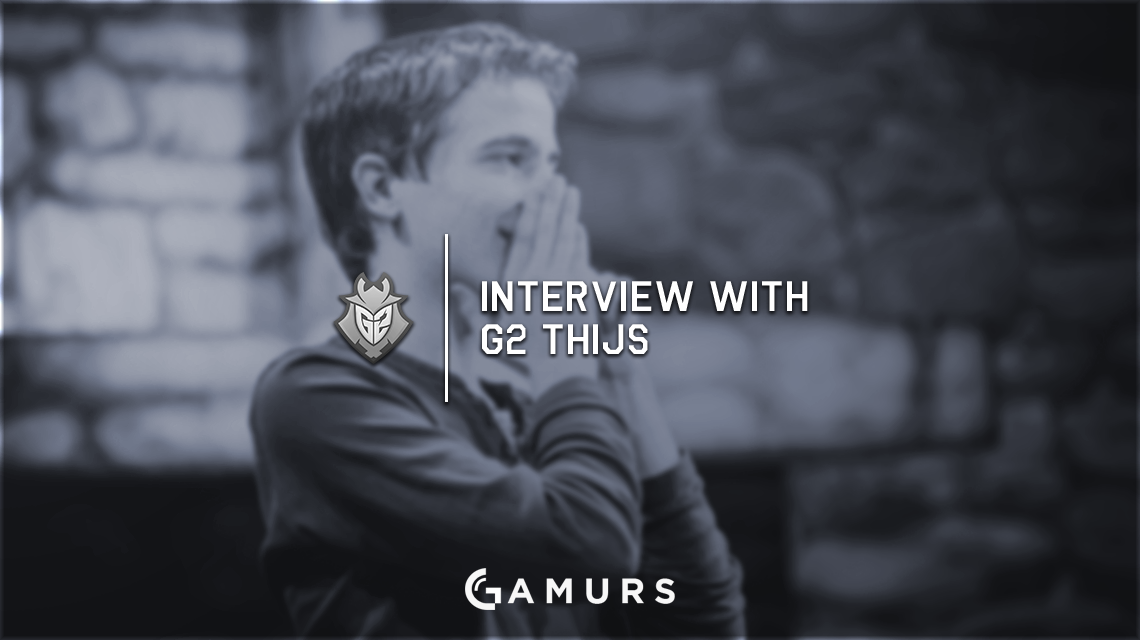 We sat down with Thijs “ThijsNL” Molendijk, one of the best Hearthstone players in the world, a two-time European Champion and almost a World Champion last year. Find out more about him below:

Thijs: I am Thijs as you already said, from the Netherlands. I am 22-years-old and I started playing Hearthstone three years ago. I first played it quite casually and then once I started playing some tournaments and those went well, I had a lot of motivation for the game. I don’t really have a lot of gaming background; I played some other strategic card games a little bit before, also some poker, but never really a lot, and now I have already been a professional Hearthstone player for more than two years.

Your BattleTag is your actual name. How come you didn’t pick up a nickname for your gaming needs?

Thijs: That’s a really easy answer actually. I’m not really a creative person and I was like “yeah let’s do something easy.” I was never thinking “oh that’s an awesome game,” I was like “okay let’s play it a bit and see how this game is” so I just put my own name in but it was caught sometimes and then I put an “NL” behind it, which is coming from the Netherlands. It turns out to be quite a fine name, actually in the Netherlands it’s a really known name, Thijs, but outside of there, it’s hard to pronounce, so it’s totally fine for my BattleTag.

You are a part of G2 Esports, one of the biggest organisations in the world. How did the opportunity come around?

Thijs: It’s just something that came on my way during my Hearthstone career. I started just as I said casually, but then after winning some tournaments and making some nice achievements, I got picked up by a smaller team at the time: MyM. It was for sure not the greatest organisation, but it helped me to participate at some tournaments, gain some attention, and after that, it was with Nihilum, which was a really nice organisation more from the World of Warcraft background.

Then I was really looking for the the big step to join a big organisation and G2 was really interested in taking the Hearthstone squad over and I really wanted to stick with the team, with Lifecoach and Rdu, who were my teammates and still have been for more than two years. We really played well together. We practised a lot together and G2 came to us and wanted to have us on the team.

I feel that it’s really amazing to be on G2. They do take care of their players and we can just really focus on our game since they take care of all the other parts. That’s really something I was missing on organisations, where I could just be the player and other things got taken care of.

Thijs: I picked it casually in the early beta where I just played the game and I found it was a lot of fun, and I still find it to be a lot of fun. I think that’s really important, to enjoy the game you’re playing. Of course you have ups and downs, but I really enjoy it still a lot. At first, I played some arena, but then because I am looking always to set high-goals for myself, I was already trying to look for tournaments and when I had the opportunity, I just went for it and I didn’t have any big goals on going so far, but it really turned out like this.

What I like most about this game is the strategy. I’ve always enjoyed card games, normally they were not online, and now you can play it everywhere. Everybody can play Hearthstone, everybody has access to it and it’s a really friendly game in a lot of ways and that’s what I really like about it.

How do you approach each season, and what strategies do you use to climb your way to the top of the rankings?

Thijs: Every season, I try to implement or look for new strategies. It’s always good to be good at some particular decks, but I also want to try new different stuff, so I try to make new decks. I really feel that you get a lot of knowledge if you try different ways of playing decks, and this is how I try to improve myself a bit.

For ladder climb, it’s a little bit of “yeah, I’ll just do it.” I can do it with a lot of different decks, it’s not that I really aim for it but in the end of the season, I look at what the best decks are for me to climb the ladder, how I can get an advantage over the current meta, the popular decks, and so I go with the deck that I think fits best, counters the meta and try to go for the top ranks. It doesn’t work all the time; it’s hard to be at the top of the ranks, but it works quite often, so it’s alright.

Thijs: I am leaning more towards the midrange to control style of decks. I really enjoy having more control over the game. I think aggro is really good for the game but I find it a bit frustrating myself when I am already behind a little bit in the early game and I have so few ways of coming back in the game. I want to blame all the mistakes, everything in the game on myself, so that I could have done something different, so I like control styles. It takes so much effort for you to do it and it’s just something maybe with my personality that I like a lot.

I think I preferred the past meta a bit more. I really loved the meta where Handlock was dominating, with Patrons. Patron warrior was a really great deck. Still, the current meta is pretty fine. You see new decks coming up and new things getting tried out, but I feel there is just a bit too much powerlevel for the aggro decks. It’s good that control and aggro keep switching up, but I still think that there is a bit too much power in the aggressive style of decks.

So, you first became known with your dominance at the famous ZOTAC cups back in the day. Did you ever believe at that time that you would become a two-time European champion and almost a World Champion a year or so later, and in fact one of the best players in the world?

Thijs: Well.. no, totally not, you just get into a flow. Things went really fast for me and I can still remember playing the ZOTAC Cups like really motivated, but that’s just online cups. Then you get your first invite to online tournaments or DreamHack, and afterwards being able to play at the European Championship and win it, this has always been a dream for me, and now that I also qualified again for the World Championship, it’s something I had never thought of and I am super excited to play again at BlizzCon. I do a lot for the game, I do a lot to improve myself everyday, I ask a lot from myself, but I also see what I get from it, so I’m really happy with it.

Thijs: I guess I already gave out some of my secrets during the interview. I think it’s the passion for the game, which is my personal motivation. Sometimes when you lose a game because it was unfortunate for you, in the end we are really playing with percentages and it cannot always go your way, but there are still ways to improve and if you’re looking at the small mistakes you make everyday and you really go over them and analyse what you’re doing, you try to become really prepared for tournaments where you know what to expect and you want to get an advantage. Also, my experience is a bit of an advantage because there are people that are coming up and are already good and they are playing Hearthstone in a high-level for like a year, but I have already quite a background on playing on big stages, in old meta, so I know exactly what the powers are of some decks and what the weaknesses are and I think all of this together made the success happen.

What are your goals for Hearthstone this year and maybe the first months of the upcoming year?

Thijs: For this year, my goal was actually to do well and maybe go for the European Championship again and qualify myself for the World Championship. That actually happened and I was really proud of myself. I wasn’t sure it could be possible because it’s so hard to do, and now I’m going to BlizzCon. I was there last year too, I went into the semifinals where I played some insane series. I can’t book myself with any other goal than to go there and win BlizzCon. It’s a really high goal, but I really want to set it for myself because I got to the semifinals last year and I want to make a step forward this year.

For the next year, it might be a bit rough to say, but I also really enjoy the streaming part of the game. I enjoy learning about new people playing the game and I enjoy trying to make new decks. Sometimes they might not be as competitive as others, but I really try to build my own decks and help people learn the game. That’s what I find super awesome. We’ll see what my goals are for the competitive scene in the next year, but I guess it’s going to be something similar.

Thijs: Don’t put too much pressure or too high-goals on yourself at the start. Just enjoy what you are doing, be a little bit of a critic to yourself sometimes, like “What could I do better?” There are sometimes things that can indeed go unfortunately for you, and you can look at these points where you could have done things differently, or made another decision. Look a little bit around in some streams to see if they can help you a bit but just really enjoy the game. It’s really important to enjoy the game. If at some point you stop enjoying the game, it’s because of the high pressure you put on yourself.

Ok I think we can wrap it up. Any final shoutouts?

Thijs: Shoutout, of course, to my team and teammates on G2. They gave me this opportunity, they make it easier for me and they do quite a lot behind the scenes. I really appreciate them, so they deserve it for sure. Same for my family that is super supportive in the good and in the bad times, and thank you for having me, it was a cool interview, so thanks a lot for that.

What do you think about Thijs? Let us know by commenting below or tweeting us @GAMURScom.